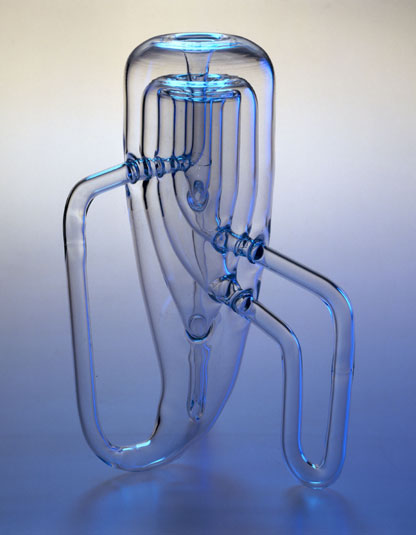 The three, nested Klein bottles shown in the image have only one side, like a Möbius strip–the outside is continuous with the inside (although a topologist would tell you that this is only an approximation and that a Klein bottle cannot really be made in our three dimensions–thanks, Dad, for the clarification). Our universe could be flat, or it could have an odd, topological shape like the Klein bottle, only in more dimensions. If this were so, with a powerful enough telescope, we might look off into the distance and see our past selves, just in a mirror image. If you want to learn more about this, I recommend How the Universe Got Its Spots by Janna Levin. It’s a fun, accessible read about ideas in modern cosmology. She wrote it so her mother could understand her work.

In this second part of my discussion of cosmic assumptions, I introduce questions about the numbers, shapes, sizes, and compositions of universes. See the introductory post, here.

Assumptions about the Universe

The purpose of this post is simply to examine a number of assumptions made in the realm of physics. Theological assumptions and the practical and ethical consequences of various assumptions must be saved for later posts.

An artist’s representation of one mainstream model of the progression of universes. Many parts are generally accepted among physicists, while some details are extrapolated from current understandings.

The first question to answer is, what is the universe? Right from this point the language gets messy and the assumptions multiply. Most often, the universe is used to mean the space and time that we live in and can observe, and the stuff beyond our observation that can interact with our observable universe in “normal” ways. I’m going to call that the observable universe. Some people assume that the observable universe is all there is. Many other physicists think it likely that there is existence beyond our universe. They postulate many universes which they call the multiverse. These other universes could arise in a number of different ways, and be connected to or separated from our universe in various ways. There are a few groups of theories about the nature of the multiverse, and while we can’t (currently) know which is most correct, just the concept itself influences what are the most logical conclusions about God and about the meaning of life.

I think most modern people think about space and time as going on forever. Because of this you hear arguments like, “With infinite time and space, everything that can happen, will happen, someplace.” This is then used to rebut “Intelligent Design” arguments that human life is too complex to have arisen by chance. It’s a patently obvious argument. There are only four forces that govern our entire universe. There is a finite number of subatomic particles that make up everything in our observable universe (ignoring for now dark matter and energy, or at least assuming that they are made of a finite number of things). This means that if time and space go on long enough, literally every combination of the things that make up our universe will be tried by the universe just from randomly combining. One of the most peculiarly Mormon hymns celebrates our knowledge that “there is no end to space”, and “no outer curtain where nothing has a place”. But this argument is only true if our observable universe, or ones very much like it, are infinite. (Side note: I don’t like Intelligent Design. Really. A lot. It makes God way too small for me. I also suspect this argument that everything will happen in infinite time and space is flawed, but that’s mostly for a future post.)

Time and space could be infinite. They could also be finite. It can be argued that time, as we know it, had a beginning with the Big Bang, and that it will have an end with the end of our universe. What about space? Think about our earth. When you go for a long walk, or even drive across country, the world seems basically flat with a bunch of bumps and dips all over it. But we know that if you keep heading in the same direction for long enough you will come back to where you started. The earth is round. The earth is finite. The universe might be round, too. Or it might be a 3-dimensional Moebius strip, or doughnut, or any number of other shapes. The nested Klein bottles (or 3D representation of them) shown in the featured picture show how complex the shape of the universe might be, but living inside it the complexities could be hidden and hard to discern. When it comes to the observable universe, all we know is that it is close to flat for as far as we can see, but there are scientific reasons to ask if the universe might be curved just beyond what we can see, and even theories about what evidence we should look for to answer this question. Time and space in our observable universe might be finite or infinite.

How many forces and particles? 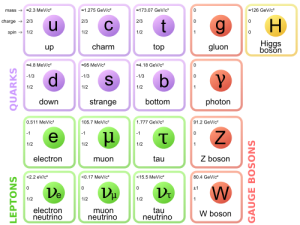 Only 17 known elementary particles. While there are a lot of ways to put these together–more than you or I could count in many lifetimes–the possibilities are still finite.

There are four (and possibly only one) forces that govern how everything behaves in our observable universe. There is a finite number of elementary particles that make up everything in our universe. Is our universe, even if it is infinite in space, time, and/or matter, finite in the ways space, time, and matter can be arranged and interact? Or is there infinitely more complexity as we get smaller and smaller and bigger and bigger, forever? I don’t know. No one does, but we actually have some very plausible guesses as regards our observable universe. Unfortunately, that doesn’t tell us much about other universes. Does every universe have the same four forces? And if they do, do the forces have the same strengths in the other universes? How about the numbers and types of particles? As far as I know, physicists have not arrived at a fundamental reason why our universe had to have these particular forces tuned just like they are, or these particular particles. And it’s possible that intelligent life could emerge or exist in universes with other laws. How many sets of laws can result in intelligent life? Just one, or infinitely many? I lean toward believing the latter, or at least something a lot bigger than one. What do you think?

I  apologize for cutting this post off in the middle, but I’m at the end of my wife’s attention span (for this kind of stuff, anyway), and that is my rule of thumb for post length. Next time I’ll continue with the discussion of the multiverse and some thoughts about just how big (and small) infinity might be. http://rationalfaiths.com/infinite-assumptions/