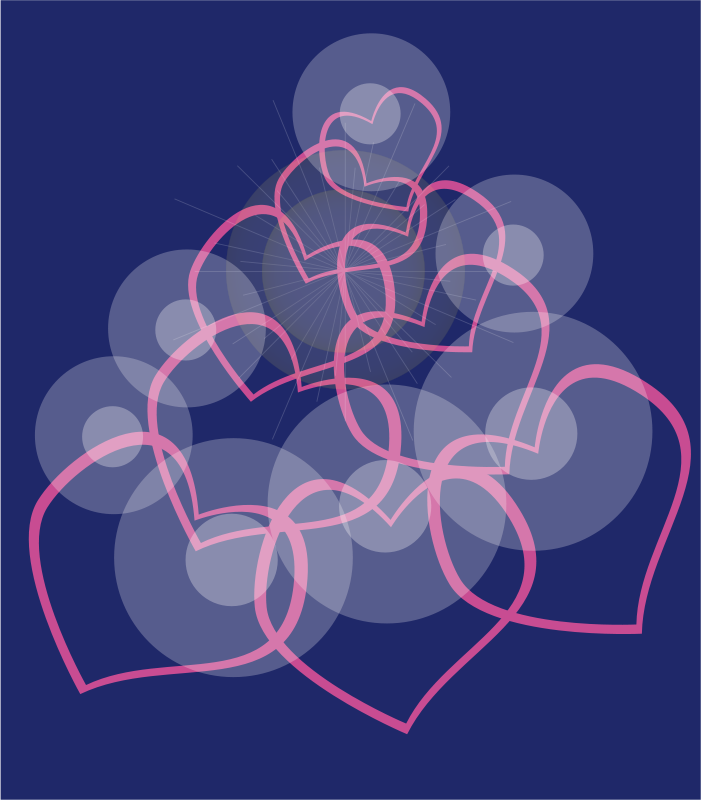 I believe God evolved. I believe in Gods within Nature, even if I don’t understand fully what that means. I believe that new Gods can emerge from this Nature simply through obeying the natural laws needed to arrive at that state. I believe that God once was as we are now. I believe that every being has learned line upon line, precept upon precept. I believe that God is part of a vast, celestial family that has been growing, populating, and creating the multiverse for untold ages. I could be wrong. There are other possibilities. Certainly more traditional Christian theology places God outside of Nature, but this is what I believe. And if Gods evolve and reproduce, then that means that they are subject to some form of natural selection. We can’t know much about the forces that drive celestial selection, but we can make pretty good guesses about a few elements. We can ask, what characteristics will make a God reproductively successful within the multiverse? What kind of Gods will win the evolutionary race? Good? Evil? Controlling? Experimenting? 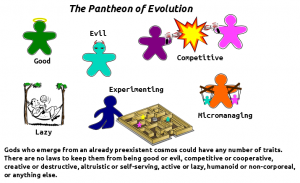 One of the key questions is, how many resources are available for the creation of universes and rearing of offspring gods? If you believe that the multiverse is limited in some practical way, then you believe God is evil. Of course, He may not be if there is a statistical distribution, but limited resources always lead to competition. If you don’t compete, you die. Cooperation within a group may be advantageous, but there are limits to that advantage, and competition will always have the potential to yield advantages, at least for certain individuals. In effect, the most successful Gods will be warlords and emperors, or at least rich capitalists. I do not believe the multiverse is limited in this way.

When speaking of reproduction, Gods who raise the most Gods to reproductive age will be most successful. This can be accomplished through having lots of offspring and hoping for the best, like mosquitos or guppies, or through having fewer offspring and carefully nurturing them, like elephants or humans. If the success of offspring depends on their eventual ability to create universes, I’m going to go with the nurturers. Maybe universe creation can be encoded into some sort of celestial genetic sequence, but I have my doubts that that is the most efficient method. Genes plus teaching and socialization seem to work faster for complex things, as evidenced by the increasing rate of technological change among humans. But will God reproduce faster by creating automatons, or by creating independent, innovative offspring?

In a simple enough multiverse, one could imagine figuring out the perfect way to be a God. There might just be a few, or even one, ways to maximize reproductive and creative rates. In this kind of reality, Gods who control every aspect of their offspring’s development, assuring strict standards resulting in optimally successful beings, would win the day. Those who experiment, or are unwilling to control their offspring for whatever reason–even for compassion towards the feelings of their offspring–will lose out in the numerical race. We might get lucky and be born into the universe of one of those compassionate parents, but the chances of it would approach zero. I don’t believe in this reality. This simplicity doesn’t match my experience. Cars, planes, and boats are all effective means of transportation, but which is the most effective? And which car is the one best car, or plane, or boat? And is there a better transportation system we haven’t imagined?

While we seek for and often find simple laws and mechanisms that underlie natural phenomena, these simple laws typically interact in ways that get more and more complex as systems get larger. Even if reality is governed by a few simple laws–like maybe some inherent form of agency, and the self-existent and eternal nature of stuff (whatever that is)–it seems most likely to me that the problem of maximizing reproductive rates is very hard, and maybe insoluble. Cloning and micromanaging fail in this complex reality. On the other hand, creating innovators who will seek for new ways to improve reproductive rates in an ever-changing multiverse will be optimal in this reality. This reality grants reproductive success to Gods who enable their offspring rather than control them. Unfortunately for Lucifer, this path requires agency.

The Problem of Agency

Most of us don’t usually think of agency as a problem–at least when it is our own. We do, however, recognize the harm other people do, both intentionally and accidentally, when exercising their agency. Even in a multiverse without the need for competition, agency can lead to competition and destructiveness. In the hands of an all-powerful being, it could possibly lead to the destruction of universes, and other Gods. Or it could lead to lazy or selfish Gods stealing universes from hard-working, compassionate Gods. Or it could lead to Gods inhibiting the progress of other Gods so that they can stay on top of the heap, so to speak. Each of these problems would limit the creative rates of Gods relative to those who don’t allow agency, but removing agency inhibits innovation and reproductive success that could result from freedom. The best scenario would be to limit the greatest power only to those who won’t use it to compete or destroy, but how can this be done? I see two possibilities. One is that the laws of nature don’t allow any beings to attain God-like power without being compassionate. Problem solved. I’m not sure what laws those would be, but maybe agency as a natural law leads to that outcome. The other option is that current Gods test their offspring for the traits required for Godhood. What are those traits? Minimally they are the possibility of long life, power to create universes, and great compassion. Long life can be granted. The power to create can be taught. Compassion is the sticking point.

How can you test if an aspiring God has compassion? Ask her? Say: “If you are compassionate, I will teach you to have enough power to create universes.” She says, “I’m compassionate. Look, I love puppies! See! I’m petting it so nicely. I’ll be gentle. I won’t cut it in half” (as my two-year-old told me about the frog he was petting in our yard). And you say, “Great! Here’s power over untold lives and the knowledge needed to kill off billions of your own brothers and sisters. I’m sure you’ll always use it properly and never do anything selfish because you were so nice to that puppy while I was watching you.” Perfect. The multiverse is all squared away and we will all become one big, happy, loving family of Gods. Yay!

Alternatively, you could run a test for compassion. Maybe take away her memory and put her somewhere where her power is significant, but limited. Put her in a place where success is favored by competition so that she is tempted to be selfish. Make it so she can’t be absolutely sure that any of it matters beyond the here and now, and see what she decides to do. If she acts with compassion despite the temptations to do otherwise–if she acts to show that compassion matters for its own sake and not because it brings some guaranteed reward–then you know. You bring her back and teach her to be a God. If not, you put her on some other path to make her as happy as possible, because you love your children an awful lot.

There are no Gods but the fastest reproducers

Gods who reproduce most plentifully and successfully will have the most offspring, create the most new universes, and outnumber any Gods who can’t keep up. In fact, on long time scales the numerical differences are staggering. Let me show you some examples: 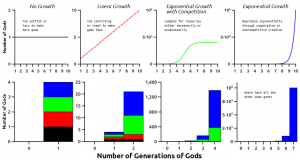 Imagine a single God stepping into His future with the power to create universes and foster new creators. He wants to always be supreme, so He chooses not to create other Gods. For all generations there is one, sole God.

Imagine another God who carefully reproduces slowly, limiting the rate of new God creation for whatever reasons–laziness, control issues, inability to do it any faster–that lineage of Gods will increase only linearly.

Imagine another God who learns to reproduce exponentially. After just a few generations Her offspring will be very numerous. Unless the offspring compete or interfere with one another for some reason, the growth will be astounding. After just seven generations, the Gods who reproduce exponentially, without limiting their growth through competition, will outnumber all other kinds of Gods by so much that we can’t even see the colors representing the other kinds of Gods on the graphs above. Extend this out to hundreds or millions of generations, and the chances that we live in a universe created by any kind of God other than the fastest exponentially reproducing kind approaches zero. Over eternity, any difference in the growth rate order will make the slower growing lineage numerically inconsequential.

Traits of the Fastest Reproducers

Let’s restate the path I’ve chosen to believe in: Gods can emerge from Nature. These Gods can access essentially limitless resources and are not required by Nature to compete amongst themselves. It is possible for Gods to interact with their creation. The conditions for making Gods are complex and difficult to optimize. The fastest reproducing Gods will numerically dominate all of existence. This is quite a number of assumptions, but when you look at the alternatives to each, they aren’t so farfetched. Limited resources in an immense multiverse? Creator can’t interact with creation once it is made? There is one, simple formula to become a God? Fast reproduction won’t numerically overwhelm slow reproduction? Do you really believe any of these alternatives? Here are traits any successful Gods in this reality must have:

Other Gods are going to fail, even if there are no other constraints than these four assumptions. They will lose. Love may not conquer all, but it will at least outnumber and overwhelm everything else. Just give it time.