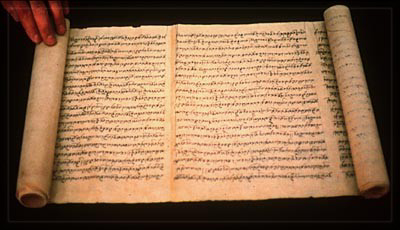 Unbeknownst to many, one of the ancient texts in the lost 116 pages of the Book of Lehi is a very small sub-section called “The Christmas Letters of Sariah.” However, we have recently unearthed one of them, believed to have been written around the time the family was about to sail to the promised land, and are publishing it here on Rational Faiths.

So if you’re reading this, I assume your house wasn’t destroyed and your family carried off into captivity. Congrats! We’re still here…roaming the wilderness. I’d tell you where, because I’d love to catch up with some of you, but we’re not even allowed to light fires. Avoiding the wrath of God does not make for good entertaining. But it helps our compass work. Oh, did I mention that in my last letter? We got a Liahona. It is so vintage-looking, I’m sure I could make a fortune on Etsy selling it to some Babylonian heiress, but I doubt Lehi would approve. Besides, since getting it, the boys have only tried to kill each other once a month instead of once a week, so there’s progress!

Also, we’ve had several new additions to the family! My sons are all married, including our “adopted son”, Zoram. He came into our family by way of Nephi murdering his master and then offering him a life of wandering in the wilderness. Heart of gold, that boy. I think we have some daughters running around here too, but remembering their names is just too much with such a large family!

Well, I should probably go check on the boys. The older ones have been ornery since an angel took Nephi’s side in their last argument. I’ll have to pull out my best raw-meat recipe which, by the way, is surprisingly good for breastfeeding…but maybe that’s just in the wilderness. Anyway, I’d love to write more but Nephi doesn’t like it when I use his plates. Apparently family letters by your mother don’t count as “plain and precious.”
Safe travels!
Sariah