Laws of the Bloggernacle 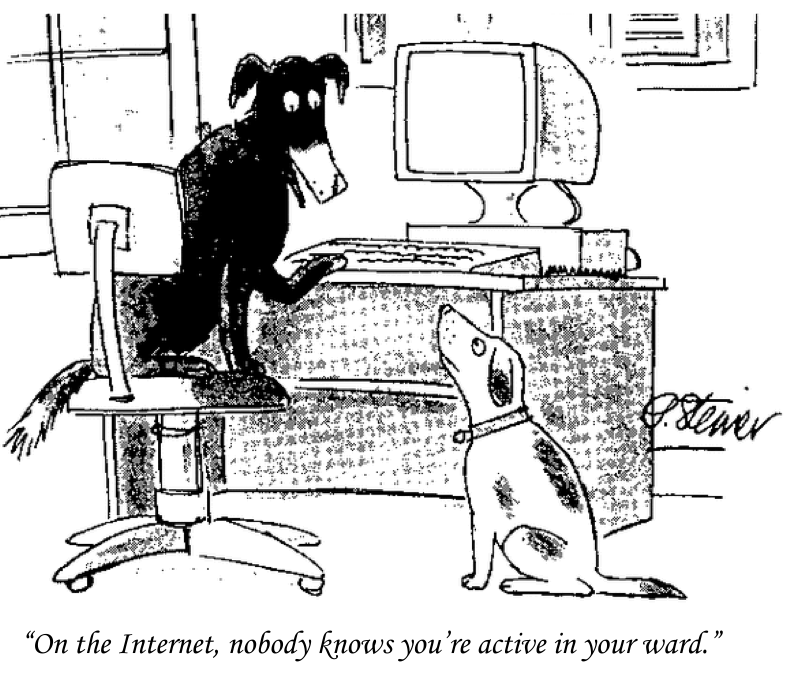 I’m a pretty big fan of these interwebs. I’m not going to hide it. And it’s got a pretty amazing collection of “rules,” including some of real gems: Godwins famous law (states that the longer an internet discussion lasts, the more likely it is that someone will compare someone else to Hitler) and Pommer’s law ( “A person’s mind can be changed by reading information on the internet. The nature of this change will be from having no opinion to having a wrong opinion”).

Drawing inspiration from those–and other–laws, I’ve collected a few rules, paradoxes, and laws of the bloggernacle that more or less govern our corner of the internet. Please add your own below in the comments so we can complete the collection! If you’ve ever wondered why we bloggernaclers–blog readers, blog writers, podcasters, etc.–act the way we do, wonder no more:

God Wins Law: The longer a conversation about the Church lasts, the more likely it is that someone will suggest/imply God agrees entirely with their personal opinions.

The Polygamy Porter: Use (or ignorance) of the Church’s complexly convoluted history with a variety of plural marriage configurations when justifying the Church’s current stance on marriage. See also: Reid’s Law.

The Law of the Pope: Quotes implying prophetic perfection and infallibility (whether by my own voice, when the prophet speaks, prophet will never lead the church astray, etc.) Conversely: any time someone quotes Pope Francis in such a way to make liberals happy.

The J. Golden Rule: States that uttering swears is worse than allowing children to starve to death in poverty-stricken cities/countries around the world. Magnified if the person also (politely) calls for a reduction in foreign financial aid in the same conversation.

Dew’s Law: Named for prominent Mormon and all around wonderful person Sheri Dew. States that every member will be able to name at least one perfectly happy Mormon woman to give as concrete and final proof that women are totally equal in the church and therefore that feminism is sexist and unnecessary.

Beck’s law: When defending the Church’s position on a hot-button issue, particularly gay marriage, abortion, evolution, gender equality, racism, (or opposing the church’s stand on immigration) the defender’s arguments will sound more like Fox News directly proportionate to the passion with which the defender is arguing.

The “First Law” of Heaven: Any law that a well-meaning person attempts to elevate above the two great laws the Savior Himself taught explicitly and simply.

The Law of the Right Hand (aka Who’s on the Lord’s Side? Me!) The proposition of a simple and clear binary with “me and people I agree with” on the side of Good, and liberal mormons, TBM mormons, conservative mormons, exmormons, “anti-sites,” apologists, etc. on the side of Evil.

Sheep’s law: States that we are to follow the brethren in every case even if we don’t feel good about it. Generally accompanied by an assertion that “this isn’t blind obedience” even though the end result is the same.

Cafeteria Paradox: Accusing others of being “bad” Mormons while ignoring the cafeteria–sized beam in our own eye.

Reid’s Law: It is okay to be a Mormon and a liberal as long as you agree with my interpretation of every issue I think the Church wants you to agree with me on.

Law of the One: Mandates stretching Savior’s shepherding metaphor to include blaming the one for wandering rather than seeking after and finding said one.

Sunstone’s Law: The more anyone looks into the history of the church as described outside of Sunday School manuals, the morel likely they are to feel or be ostracized in discussions of church history and doctrine in Sunday School, Relief Society, and/or Priesthood meeting.

PR Paradox: The disparity between statements of openness and inclusion on the one hand, and the racial, political, socioeconomic, and religious uniformity that comprise the reality of weekly Ward attendance on the other.

Principle of the Order of United: Describes the verbal gymnastics and creative re-ordering of historical facts employed to make the United Order look as little like leftwing politics as humanly possible.

Law of Sustaining the Brethren: “When the Prophet speaks and I agree, the debate is over.” See, for example, recent and vehement member opposition in Utah to a Church-supported immigration plan.

The Bloggernacle Paradox: [[submit your own version of this paradox below in the comments]]