Know Your Religion, Don’t Show It 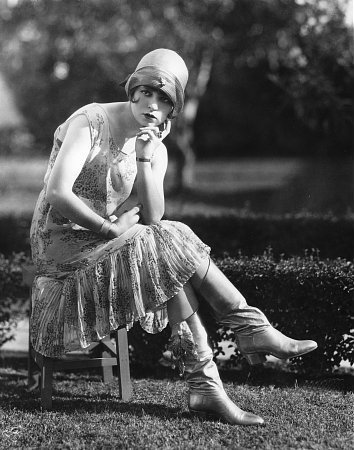 This post breaches a sensitive topic among Latter-day Saints. I will openly discuss the LDS garment, hopefully in a respectful way. This post spawned from a recent, lengthy discussion that I had with my wife. If you choose to continue reading, please do so with an open mind.

Before I even discuss the actual LDS garment, I want to discuss why they are worn:

“Garments are a symbolic gesture of the promises that Mormons have made to God. The garment is always worn under other clothing, next to the skin. In fact, for most people who wear it, the garment takes the place of regular underwear….It serves as a constant reminder of the covenants made during the temple endowment.”  (LDSChurchTemples.com)

While the garment means something different for everyone who wears it, in general it serves as a reminder of the promises and covenants made in the temple.

As I worked on the past revelation series for this blog regarding LDS temple work, I saw that many changes were due to practicality. This is especially true for the garment that participants are instructed to wear once they go through the temple. Before any changes were made, warnings were stated about changing the original garment: In 1906, Joseph F. Smith characterized any attempt, in the name of changing fashion trends, to modify the 1840s garment pattern, which he characterized as “sacred, unchanged, and unaltered from the very pattern in which God gave them” as a “grievous sin.” (“Editor’s Table”, Improvement Era 9)

“The Saints should know that the pattern of endowment garments was revealed from heaven, and the blessings promised in connection with wearing them will not be realized if any unauthorized change is made in their form or in the manner of wearing them” (Mysteries of Godliness, pg 150). 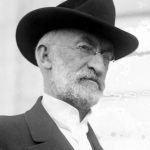 In 1923, just 17 years after this comment was made, the garment went through some major changes. President Heber J. Grant issued a letter regarding garment modifications: sleeves could end at the elbow; legs could be shortened to just below the knee; buttons could be used instead of strings; the collar was eliminated. More changes were made in the same year that shortened the sleeves and legs even more and also eliminated buttons (Mysteries of Godliness, pg 150).

President Charles W. Penrose of the First Presidency explained some of the reasoning behind the changes to the garment, which included:

Complaints were heard by the General Authorities:

“Encasing the lower limbs the old-style garment reaches to the ankles and is looked upon by young members as baggy, uncomfortable and ungainly.  The young of the gentler sex complained that to wear the old style with the new and finer hosiery gave the limbs a knotty appearance.  It was embarrassing in view of the generally accepted sanitary shorter skirt.” (Mysteries of Godliness, pg 152-153)

…and the complaints were answered by the General Authorities:

“..somewhat reluctantly and with deference only because we have convinced ourselves that it will… obviate undesirable exposure of the garment which now so frequently occurs through the wearing of present-day patterns of clothing.  We feel sure that such a modification will greatly please many good women throughout the Church, and we have not been able to see that we are yielding any vital thing in this slight change” (Mysteries of Godliness, pg 152-153).

Do we have any of the same complaints today? Do we have undesirable exposure of the garment? Nod your head or shout amen if you have experienced or seen any of the following examples.

So what are we to do? Are we kind of like the saints in 1923? In 1979, the two-piece garment was made available and was welcomed with great enthusiasm. I can’t even imagine the fitting issues a one-piece would have. It seems that each change that has been made to the garment has been to promote a better fit and to adapt to the fashion styles of the time. My wife, who is fairly petite, would like to wear garments that actually fit her. She has no problems wearing garments, but finds it irritating that garments do not fit her body correctly and there are no options for her (trust me, the “options” at the distribution center are not options). A direct quote from her: “I would never go to a store and purposely buy something as ill-fitting as garments, no matter how inexpensive it was; but with garments, I don’t have any choice.” She, and I’m sure many others, would be more than willing to pay a little more money for something that was more comfortable and practical.

Some might say that garment changes or modifications would allow women and men to dress immodestly. Just kidding; they would say it would allow women to dress immodestly.  Is the garment there to force you into a modest dress code? For some, such as petite women, the answer is yes.  For tall women who can wear shorter shorts and skirts with garments, the answer is no.  How is that fair in regulating modesty? There seems to be some incongruency here.  And if the garment were a tool to enforce modesty, where is the free agency? I feel strongly that the garment is there to serve as a reminder of promises and covenants, not to enforce modesty.

I believe that the choice to wear the garment is a private, personal decision that one makes with God and no one else. This being the case, we should not make this choice public. But how can we do this? Should we wear baggy clothes that are long and cover the body? Should we wear colored shirts so the markings can’t be seen through a white shirt? 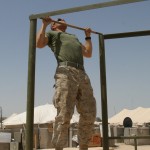 I was interested to find out that to avoid exposure of the garment, members in the military – men and women alike – send in any shirt, including shirts with their company logo on them, and the Church silk screens the markings on the inside of the shirt. Brilliant! Also they do this due to the heat in certain areas like Iraq.  They are allowed to wear just the garment as a normal shirt as the markings remain hidden and private. They can also wear a spandex type bottom. They are able to mark anything – any color, any style. Why do they do this? So the garment is not exposed. The private choice between God and them remains private when they are changing in front of other people and if someone else does their laundry.

Have you ever caught yourself looking for telltale signs that someone is wearing the garment? Why were you looking? Did you want to know if they were Mormon? Did you want to find out if they were living the covenants? Is this a good thing? I say unto you, nay!  In the scriptures it is always looked down on when something is publicly viewed to show worthiness. Matthew 6 reads: 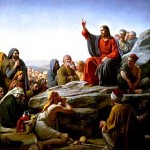 Carl Bloch Sermon on the Mount

“Take heed that ye do not your alms before men, to be seen of them: otherwise ye have no reward of your Father which is in heaven.

Therefore when thou doest thine alms, do not sound a trumpet before thee, as the hypocrites do in the synagogues and in the streets, that they may have glory of men. Verily I say unto you, They have their reward.  But when thou doest alms, let not thy left hand know what thy right hand doeth:  That thine alms may be in secret: and thy Father which seeth in secret himself shall reward thee openly.

And when thou prayest, thou shalt not be as the hypocrites are: for they love to pray standing in the synagogues and in the corners of the streets, that they may be seen of men. Verily I say unto you, They have their reward.  But thou, when thou prayest, enter into thy closet, and when thou hast shut thy door, pray to thy Father which is in secret; and thy Father which seeth in secret shall reward thee openly…

Moreover, when you fast, do not be like the hypocrites, with a sad countenance. For they disfigure their faces that they may appear to men to be fasting.
Assuredly, I say to you, they have their reward.  But you, when you fast, anoint your head and wash your face, so that you do not appear to men to be fasting, but to your Father who is in the secret place; and your Father who sees in secret will reward you openly.”

If wearing the garment is a private choice between God and the individual, then we need to keep it private. Today’s fashions leave the garment too exposed in many different ways and this needs to change.

Part 2 of this post we go over some possible solutions to the garment.