The King James Bible in the Book of Moses, Part I 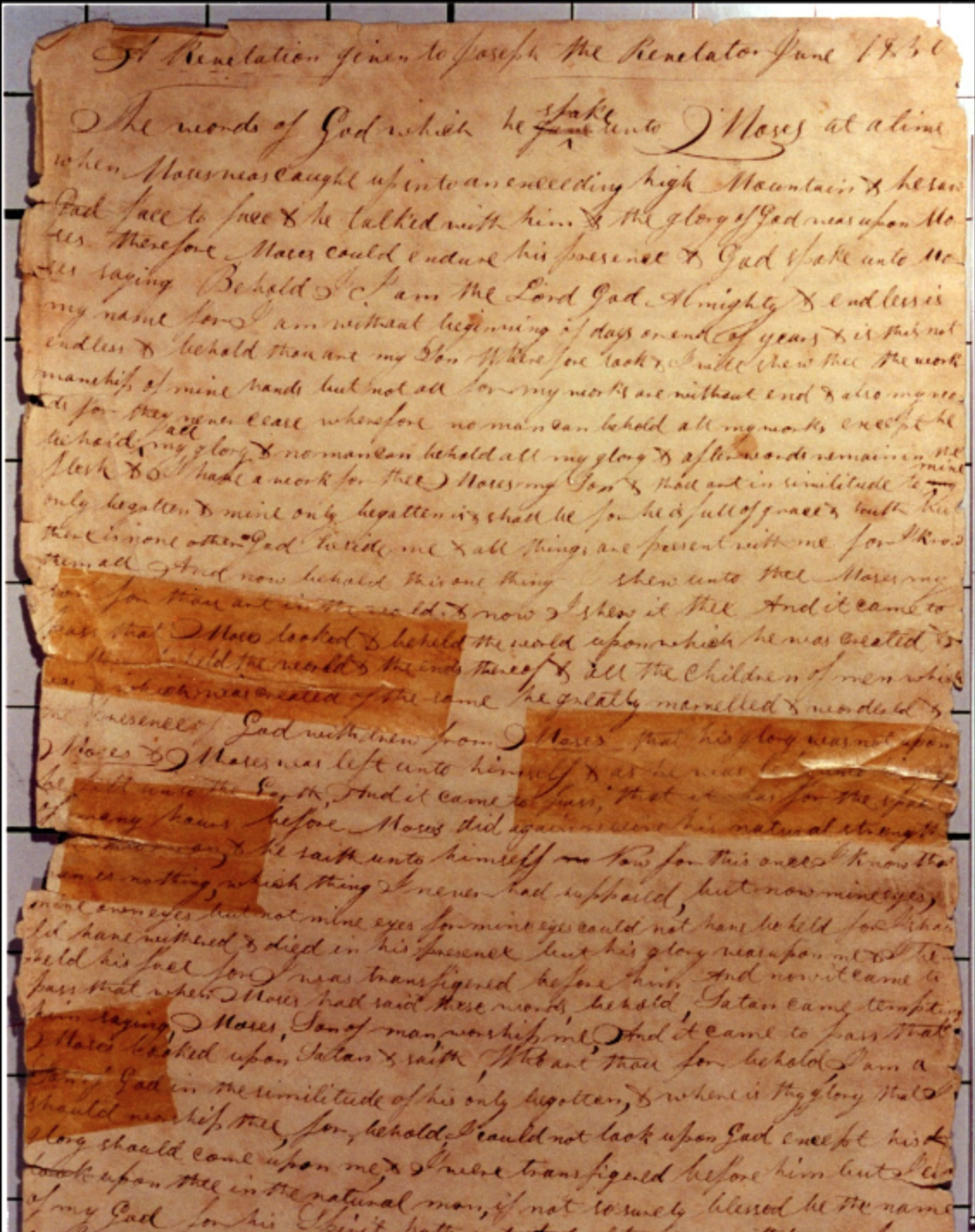 With the recent publication of David Bokovoy’s Authoring the Old Testament: Genesis-Deuteronomy, many have wondered to what extent the Bible has had influence on the Book of Moses. The discussion has mainly revolved around the parts of the text that are obvious revisions of the Genesis creation chapters (Genesis 1, 2-3) that originate from different Israelite sources written centuries after the time of Moses. In response to and in order to make a contribution toward further understanding this topic I will look closely at the full text of the Book of Moses in the original manuscripts (as presented in BYU’s RSC publications) and locate the places of intertextuality. I will present the Book of Moses on a chapter by chapter basis until I arrive at the end, and after this is complete I will offer some thoughts on to what extent the KJV influenced the composition of the Book of Moses. This will take time for each of these posts to come out, and I hope that in the meantime others will utilize the work here to discuss the topic. My approach in these posts is based on my much larger project of locating textual dependence throughout the Book of Mormon on the King James Bible, a manuscript that will be published by Greg Kofford Books.

My basic approach is that of textual dependence, but the work here includes all forms of intertextuality. Intertextuality refers to the nature of oral and written texts to all “intersect” at given points. Intertextuality itself is an umbrella term for all of these connections. Not every highlighted place found below is textually dependent on the biblical reference in the notes. There are varying degrees of intertextuality, and I will briefly define my criteria for locating these.

Joseph Smith breathed the air of the King James Bible. It was everywhere around him, in publications, in preacher’s sermons (who often utilized the language of the KJV to instill authority in their speech), and in reading and discussing with family at home. Even the Webster’s 1828 dictionary (and his earlier dictionaries) is based on the language of the KJV. Many places of intertextuality will be dependent on the KJV directly, and other places may simply be due to phrases being common to Joseph and his scribes in the setting of the production of holy scripture. The criteria above will help to balance the varying kinds of dependence that we find in the Book of Moses, and is necessary to check the assignment of the verses to a specific kind of relationship. In creating this post, and all future posts on this topic, I am using the publication by Kent P. Jackson, The Book of Moses and the Joseph Smith Translation Manuscripts (Provo: Religious Studies Center, Brigham Young University, 2005).
It will be noticed, and I feel I can make some preliminary remarks on this before I comment in greater length at the end of this series, that Moses 1 is heavily dependent on Matthew 4 for its presentation of Moses’ meeting and wrestle of words with Satan. In the footnotes I locate the varying kinds of dependence, and, although none are direct quotations, there is a running theme to this section of the text that does go back to Matthew’s version of Jesus’ encounter with Satan in Matthew 4. We can know that it is the gospel of Matthew and not Luke that Moses 1 is dependent on because of phrases not found in Luke’s version, such as “get thee hence Satan.” This is only one place of dependence, and I invite the reader to look closely at the the footnotes and compare the text of Moses 1 with that of the verses I have suggested. Readers can use blueletterbible.org to check the recurrence of these phrases for themselves and judge my assignments accordingly.
Some wonder why this kind of study is necessary, and have even said to me that it is a pointless area of research. There are many reasons why I think this is an important aspect of study that needs to be done. (1) Ever since the publication of the Book of Mormon people have pointed out the similarities between the Book of Mormon and the Bible. Intertextuality has been an important aspect of studying restoration scripture whether we have been conscious of it or not. (2) Locating similar phraseology and themes has not only been non-exhaustive in Mormon studies up to this point, but in those works that have examined intertextuality have not fully examined the differences found in the source text (hypotext) and the dependent text (hypertext). We need to ask the questions of where in the history of ideas does restoration scripture fit after we have analyzed how the hypotext is used in the hypertext. (3) The study of intertextuality and textual dependence has been plagued by the fear that one will lose their faith if they discover that the New Testament (NT) is used heavily throughout the Book of Mormon, or even texts like the more popular Deutero-Isaiah (Isa. 40-55, written after the Babylonian exile). These fears should be set aside and we should realize the importance of this study in helping us to understand the messages of the Book of Mormon, Book of Moses, the Book of Abraham, and even the Doctrine and Covenants. No one needs to lose their faith simply due to the fact that these books are dependent on the KJV. (4) The last, but I think still a very important point, is that this kind of approach is still very young in Biblical studies. Exegetes had pointed out for centuries the similarities found between different biblical prophets, but it was only in the 1980’s that strict criteria for locating textual dependence began to be formulated. It has only been within the last ten years that the real fruit of those labors has begun to be seen in biblical studies generally. This is an opportunity for Mormon studies to be current with Biblical studies. I think these points are reason enough that we should turn to the comparative study of intertextuality and textual dependence of Mormon scripture on the Bible.

My contribution here is not definitive, but preliminary. Criticisms are welcome as this is a work in a progress, and anyone who would like to discuss any issues they see with what I present here are welcome to e-mail me at colby_townsend@yahoo.com.

Moses was caught up into an exceeding high mountain,[5] 2 and he saw

Moses <him>; therefore Moses <he> could endure his presence, 3 and

for I am without beginning of days or end of years;[12] and is this not endless.

workmanship of mine hands,[16] but not all;[17] for my works are without

behold all my glory, and afterwards remain in the flesh <on the earth[21]>.

he is full of

things are present with me, for I know them all. 7 and now Behold

this one thing I show unto thee, Moses, my Son; for thou art

Moses looked, and beheld the world upon which he was Created, and as

and wondered, 9 and the presence of God[32] withdrew from Moses, that

left unto himself he fell unto the Earth.[35] 10 And it came to pass

held God> but not

eyes could not have beheld for I should have

beheld his face for I was transfigured before[41] him. 12 And now it came

For his spirit hath not altogether withdrawn from me. or else <I say> where

unto me Thou art after the similitude of mine only begotten.[59] 17 and he

also gave unto me commandment, when he called unto me

will not cease to call upon God,[64] I have other things to inquire

wherefore I can Judge betwixt <between> him and thee.[65] Depart hence,

of Hell, Nevertheless, calling upon God[73] he received strength[74]

and he commanded[75] Saying, Depart hence, Satan,[76] for this one God

voice[87] with weeping and wailing and gnashing of teeth,[88] and departed

yea from the presence of Moses[90] that he beheld him not. 23 And

which beareth record of the Father and the son;[98] 25 and calling upon the

name of God, he beheld again his glory,[99] for it was <rested> upon him

have chosen thee, And thou shalt be made stronger than the

many Waters, for they shall obey thy command even as if thou

for thou shalt deliver my people[106] from bondage,[107] even Israel my

and there was not a particle of it which he did not behold, discerning

and there was not a soul which he beheld not, and he discerned them

by the spirit of God,[117] and their numbers were great, even as numberless

and each land was called Earth,[119] and there were inhabitants on[120] the face

word of my power, have I created them,[134] which is mine only begotten

have I created, and I also created them for mine own purpose,[137] and by

only an account of this Earth, and the inhabitants thereof[141] give I

unto you. For Behold, there are many Worlds which have

passed away by the word of my power,[142] and there are many also

which now stand, and numberless are they unto man; but

all things are numbered unto me. For they are mine and I know

and they cannot be numbered[149]

pass the> immortality and[151]

you[153] concerning this Earth upon which thou <you> standest, and

the children of men shall esteem my words as naught, and take

many of them from the Book which thou <you> shalt <shall> write,

will raise up another like unto thee <you,>[156] and they shall be had again

among the Children of men,[157] Among even as many as shall

of men.[162] and now they are also spoken unto you show them

[11] P. The phrase “Lord God Almighty” appears in the KJV exactly 5 times, all in the Book of Revelation.

[14] Jackson notes (n. 9) that the archaic “shew” is modernized in the Times and Seasons and on the Committee Manuscript of the first RLDS edition of “The Holy Scriptures” (JST). The more original “shew” is kept due to its closeness to the KJV, and the fact that it represents the earliest spelling.

[80] As Jackson notes, “Joseph Smith’s revision of the following sentence reads (modern punctuation added): “And Moses received strength and called upon God in the name of his Son, saying to Satan: Depart hence.”

[147] Jackson says, “Joseph Smith’s revision of the following sentence reads (modern punctuation added): “And the Lord God spake unto Moses of the heavens, saying: These are many . . .””