I Don’t Want to Be On your Team 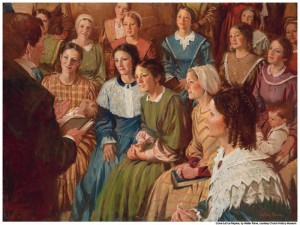 I wrote a post not that long ago titled Why I Left. You can read it if you want but essentially I put the Church on blast for pretty much everything I think is wrong with it. I meant every word of it. Right away I received more than a few supportive messages which gave me both strength comfort. Then there were a few messages that seem to imply that I had been drafted into the 2014 cool kids club. To be clear, I don’t want to be on anyone’s team. Relationships are important to me but I don’t want to be in a clique. I just want to work through these issues with the support of faithful members and those who are a little critical. I still love the Church very much. I don’t think that is so weird or uncommon. Navigating a faith crisis for me has at times created so much cognitive dissonance I have, just like the wine press, let more than a few tears under the crushing pressure of it all. I think as time moves on the amount of venom I spit will lessen. With time comes maturity, which may lessen the frequency of my Internet tantrums. I may respond to these overwhelming and heart wrenching experiences with more sensitivity and love.

I love the gospel but loathe the patriarchal hierarchy. I love the Saints and hope one day to be able to attend meetings with them again.

I thought I’d take a break from my normal polemics and share a few reasons out why I still love the Church.

The Book of Mormon– I have a very intimate and meaningful relationship with the Book of Mormon. My wife and kids know it’s my favorite book but not many others would. I still read from it regularly. I honestly don’t give a damn about horses, swords, or cement. I’m not interested in discussions involving evidences for or against historicity. Navel gazing is not my thing. Instead, I prefer to focus on the book’s moral influence and theology. A desire to interact with the text metaphysically does just fine for me.

Joseph– He is my Prophet and always will be. I am aware of his short comings, wait, let me rephrase that- I am aware of his SERIOUS sins and transgressions and I refuse to excuse them or ignore them. That said, I have had very real spiritual experiences that justify my belief and faith in Joseph as a Prophet (what an impossibly complex word to understand or describe). The same goes for the First Vision as I understand it. I reinterpret those spiritual experiences from time to time but they only take on new meaning but they never disappear. Praise to the Man is a hymn I sing with enthusiasm and without reservation.

The Brethren (also known as the PRethren) – The Brethren have their moral failings, but so do the rest of us. I think Boyd K. Packer is probably the biggest jerk in the history of the Church, but I think he tries. I’m certain he’s doing the best he knows how. Let me share a story. I went to a leadership training meeting at the Tabernacle where President Packer and his wife spoke. It was what you would have expected; that is until it came time for the benediction. My journal indicates it was a female who stood to offer the prayer. As we all bowed our heads and closed our eyes I heard President Packer’s voice offering his apologies for interrupting. He had gotten up from his seat and stood at the pulpit again. President Packer said next, “My young friends, I feel there is more I could do for you. I feel inspired to give you all an Apostolic blessing.” He then spoke with such power, authority, and raw emotion that I have never forgotten or forsaken what that meant to me. In a way it was a testament of the love and concern the Brethren have for us. Their love can be misplaced and obstructed by pride, tradition, culture, and yes- just being a plain ‘ol jerk. I’m a jerk too. Some ask, “Shouldn’t we expect more from Prophets and Apostles?” I would answer, probably not, but I still do. Nevertheless, I think we’re all just doing are best. I’m not trying to excuse their behavior or mine. We love, triumph, succeed and fail with the same regularity. I’ve personally met more than a handful of Apostles while I was active and can say with certainty that they are primarily motivated by love. I do have to say that although my screw ups only effect people in the hundreds I am happy they don’t effect people in the millions.

The Drinking Fountains– The good Lord has seen to it that North American chapels are outfitted with the COLDEST and purest water in all the Universe. Nothing is as sweet as Church water after Wednesday basketball. (Do we put basketball courts in non-American buildings?) I’m talking about Mormon culture and I think it is awesome. From our hymns to our ridiculous ill-fitting suits I can’t say how much I’ve grown to love our weird religious culture.

The Saints– Mormonism is filled top to bottom with amazing people. I miss worshipping with them almost more than anything else. My experience has been that we are a good and faithful people willing to serve and love one another without hesitation.

I could go on, but I won’t, except to say that although there are issues preventing me from attending Church and paying tithing, however, they do not, nor will they ever, erase all the reasons I love the Church.