How Shall We Continue in The Silencing? 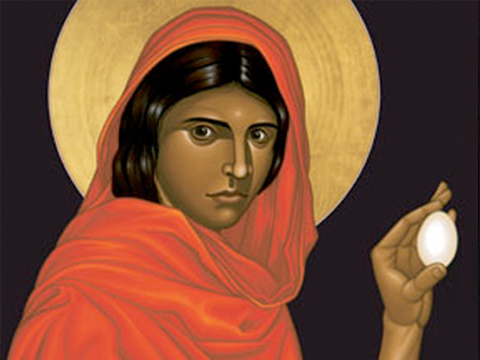 Imagine how Mary Magdalene must have felt on the morning of the Resurrection, being the first person to see the risen Christ. Imagine too how she must have felt later on when she would be forever silenced for her testimony: “I have seen the Lord: such is the story of the Resurrection as told in the Gospel of John. With it begins the history of Christianity, and with it ends the New Testament history of Mary Magdalene.”(1)  And still the Church rests on a special commission given to her by Christ himself, “but go to my brethren and say unto them, I ascend unto my Father, and your Father; and to my God, and your God” (John 20: 17).

Tradition says Mary Magdalene did continue her earthly mission, but so much of that has been the stuff of legend. According to the Eastern Orthodox tradition, Mary Magdalene finished out her years in Ephesus, a city devoted to the goddess Artemis, while the Western medieval tradition maintains that she died in France and is laid to rest at Sainte Baume. (2)  In both traditions, she remained celibate and chaste following the Resurrection. The Gnostic Gospels, more specifically the Gospel of Philip, paint Mary Magdalene in a very different light, as Jesus’ chosen successor and most intimate companion, or perhaps even his wife. Still the question remains, “If Mary were so important to Jesus, why is there no mention of her in Acts, or in the Epistles?” (3)

And with that, the Mormon belief in Heavenly Mother faces the same set of challenges, except this time on a much grander scale; for in this case we are dealing with Deity. The problem here is not so much that She exists – as Latter-Day Saints we historically acknowledge as such – the problem is we operate on a stifled belief in Her that is used to perpetuate the status quo, when a doctrine of Her really should be used to promote an elevated view of women reflecting Her image: “From the point of view of Church authorities, then, Mother in Heaven seems to provide a role model for Mormon women. Patriarchy among Mormons is seen as justified by the order of Heaven.” (4)

In honor of July 22, St. Mary Madgalene’s Feast Day, a day historically set aside by the Catholic Church to honor Mary Magdalene, a woman silenced, marginalized, and unfairly shamed by the very institution she founded, I would like to revisit this question; why does the testimony of a woman continue to be “less than” that of a man? Will the tables ever be turned, and who will be the ones to turn them upside down? How shall we continue in the wake of this systematic silencing?  Women will rise up, sometimes in a unified voice, other times alone, but they will be quickly silenced and shut down. It is getting to the point where we are afraid to say anything anymore. Feminist organizations exist solely for the purpose of raising awareness (of women’s issues), but it seems that day has passed. Awareness has been raised, and the pressing question remains: what next?

If a woman were to stand up in church and say she felt called to be a prophetess, who would believe her? And yet prophetesses are mentioned throughout the Bible and include women such as Miriam, Deborah, Huldah, the wife of Isaiah, and Anna in the book of Luke, among others. In the Hebraic tradition, a prophet (nabi, masc., nebiah, fem.) (5)  is defined as “a person who serves as a channel of communication between the human and divine worlds.” (6) The topics section on the LDS church website defines a Prophetess as  “A woman who has received a testimony of Jesus and enjoys the spirit of revelation. A prophetess does not hold the priesthood or its keys.” (7) However, in light of this, there remains much confusion surrounding the role of a prophetess and there is an assumption that all prophecy has to come from the top down in the LDS church. Reminding us of the Seventh Article of Faith, a dear friend of mine (who will remain anonymous) – who has known from a young age she had a prophetic calling – tries to clear up some of the confusion; still it remains a struggle for her. She writes:

“I can’t tell you how scary it was the first few times that I spoke through the inspiration of the  Holy Ghost, and with the touch of the spirit of my Heavenly Mother. I knew Her touch, because She has answered my prayers, and She had spoken to me. I was very young though, and I did not yet understand that there is a difference between the calling of a Prophet and Apostle that is a Special Witness of Christ, and that holds the Administrative and Prophetic keys of the Church of Jesus Christ of Latter-day Saints, and a prophetess who has the spiritual gift of being able and willing to speak to, and for, our Heavenly Parents to an individual person with a specific revelation meant only for them.” (8)

Imagine if a woman were to claim she had a direct encounter with Heavenly Mother, her testimony would be muted; of that I am sure.

(4) Heeren, John, Lindsey, Donald B., Mason, Marylee. “The Mormon Concept of Mother in Heaven: A Sociological Account of its Origins and Development.” Journal for the Scientific Study of Religion 23, no. 4 (December 1984): 396-411. Heeren et al. further makes reference to Carol Lynn Pearson’s assertion (1982) that a belief in Heavenly Mother could be used to bring about greater gender equality in the LDS Church.

(7) “Prophetess” in The Guide to the Scriptures.  Intellectual Reserve, 2012-2015: https://www.lds.org/scriptures/gs/prophetess

The Seventh Article of Faith of the Church of Jesus Christ of Latter-Day Saints states: “We believe in the gift of tongues, prophecy, revelation, visions, healing, interpretation of tongues, and so forth.”