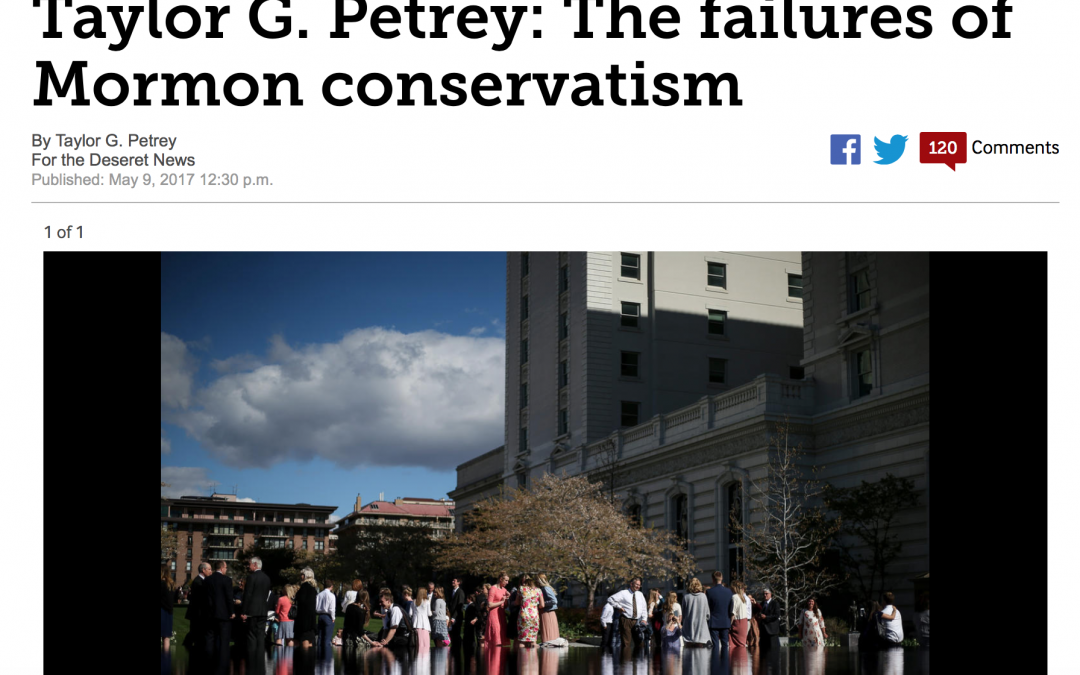 Over the past few weeks, the pages of the Deseret News have seen wonderful contentions (h/t to Alma for that phrase) about the relationship between Mormonism and politics. This is the sort of back-and-forth we need to see more of in discussions and disagreements about Mormonism.

I won’t weigh in on the conversation right now, but I do want to provide a quick primer on where things are–I’ll include the author, the title, a link to the full article (just click on the title), and a few select paragraphs. We’ll start with the essay that ignited this firestorm:

Mormon conservative politics is largely a moral failure. Too many Mormons have outsourced their morality to the false gods of trickle-down economics and nationalist protectionism. Conservatism reduced morality to a question of sexual conduct and how much of the body clothes cover. It turned moral analysis of wealth and poverty over to the amorality of libertarian economics. Mormon conservatism enabled plutocrats whose policies contributed to the massive transfer of wealth from the lower and middle classes to the top 1 percent and reduced economic mobility.

Political monopolies, like economic monopolies, are rarely conducive to the common good. In our efforts to be a united people, we have confused homogeneity with genuine unity. When Mormon progressives call for a revitalization of Mormonism’s past and potential, they do not mean that Mormons should all become Democrats. Rather, they mean that the political monopoly of one party distorts the community and its priorities by crowding out genuine conversations about the relationship between our religion and public values.

Having chosen a failed political path, a morally suspect social analysis and a self-destructive single-party system, it may be time for a re-evaluation of the role of this brand of conservatism in Mormon identity.

Boyd Matheson: The Case for Mormon Conservatism, a reply to Taylor Petrey

Mormon conservatism in Utah has produced unparalleled political success with practical, balanced solutions to social problems that are paralyzing the political class everywhere else. Utah is where significant reforms have not just been hypothesized or hyped but actually delivered and enacted. On critical issues including immigration, LGBT equality and religious freedom, Mormon conservatism has been able to incorporate the strongest aspects of views from across the spectrum to create meaningful solutions.

According to the Family Prosperity Index (FPI), Utah is producing the most stable and secure homes for women and children in America and leads the nation in bringing economic prosperity into families, neighborhoods and communities. The fruit of this kind of conservatism also lands Utah at the top of the upward mobility chart, according to a Harvard study, with the highest rates for children in poverty being able to climb the economic ladder into the middle and upper classes. Utah also boasts the nation’s top economy and lowest unemployment and is at or near the top for charitable giving, volunteerism and quality of life, just to name a few. Further, the principles of Mormon conservatism are driving innovative reforms to criminal justice, such as those proposed by Sen. Mike Lee and transformational training programs for those trapped in the penal system like those espoused by The Other Side Academy.

Utah is far from perfect, but as a laboratory of democracy it is doing exceptionally well. Mormon conservatism will continue to be a certain trumpet out to the world on principles and policies that produce real results. Utah will continue to provide a window in where the world can come and see those conservative principles in action.

Christian doctrine is quite clear that disciples of Jesus are to help those in need. This longstanding mandate applies to individuals — not institutions. Christ did not encourage his followers to lobby Herod to tax the rich and help the poor. His teachings did not condone incarcerating those who objected to such enforced obligations. The Sermon on the Mount did not commission Caesar to remedy what Petrey perceives as an “uneven distribution of wealth and power.”

Paul Mero: The true relationship between LDS and conservatism, a response to Taylor Petrey

Not unexpectedly, the more acceptable Mormonism has become in the eyes of progressives, the less it has grown. In the “radical right” years of President Ezra Taft Benson, in times no less culturally contentious as these, LDS Church annual growth hit a high of 8 percent. This year? One and a half percent. There is no progressive case for LDS Church growth. Petrey gets his cause and effect wrong.

But where Petrey really goes wrong is in his definition of conservatism. Like a Bible-thumper lecturing Latter-day Saints about what their faith really means, progressive Petrey thinks he knows what conservatism means. As a lifelong conservative and #NeverTrump voter, who accordingly formally dissociated with the Republican Party, let me set the record straight: Mormonism is inherently conservative.

There is an undeniably strong relationship between Mormonism and conservative intellectual thought. Our worldviews are the same.

Richard Davis: A call for political diversity, not conformity, within the LDS Church

Which is it? Have the predominant conservative forces in The Church of Jesus Christ of Latter-day Saints led church membership on a path to political failure, as Taylor Petrey suggests? Or is the church inherently conservative and therefore the calls for more progressivism essentially contrary to the basic nature of LDS doctrine?

Both views suggest a polar approach that writes out of acceptable LDS thought and practices the views of the other. For Petrey, it is the failure that inheres to accepting Mormon conservative views as LDS Church practice. He considers Mormon conservatism to be “self-destructive to the Mormon community itself.”

However, Petrey’s critics go further in seeking to push Petrey’s views out of the mainstream of Mormon political thought. Paul Mero writes Petrey “tempts members” with his views. He baldly states that “Mormonism is inherently conservative” and calls Petrey’s perspective “antithetical to our worldview.” Similarly, Connor Boyack asserts that the “correct application of church doctrine will actually lead one away” from Petrey’s views. For the critics of Petrey, progressivism is the antithesis of traditional Mormon views and does not fit within acceptable LDS perspectives.

Neither exclusive position should be adopted by church members. Just as political progressivism is not inherently contrary to the moral positions of the LDS Church, so conservatism is not the path to disaster. What this debate suggests is a tendency to write out of the church views that disagree with our own. If the question is which side shrinks church membership, the answer is that kind of demand for conformity will do so.

Over the years, I have talked with many former (or formerly active) members who no longer felt to have a place in the LDS Church because of their more progressive political views. Recently, I heard a conservative member say that he worried the church was becoming too progressive and no longer standing up for values. My guess is that his views are becoming increasingly common.

Even beyond our backgrounds, the reality is the gospel message leads church members to contrasting conclusions about government, as well as about particular current issues. We should accept that diversity and not seek to impose conformity in political views (or in many other areas either). We can coexist in a pluralistic church if we are willing to do the following: recognize our political views as not something the church and its members should clone, place our political views as lower priorities than gospel principles, and be willing to see others who disagree with us as faithful members as well.

The debate about whether a good Mormon can be a Democrat seems to still be raging on, especially in the pages of the Church-owned Deseret News. I hope it continues to rage on, and that both sides are heard and considered. We would do well to learn from Alma that some contentions are wonderful after all.