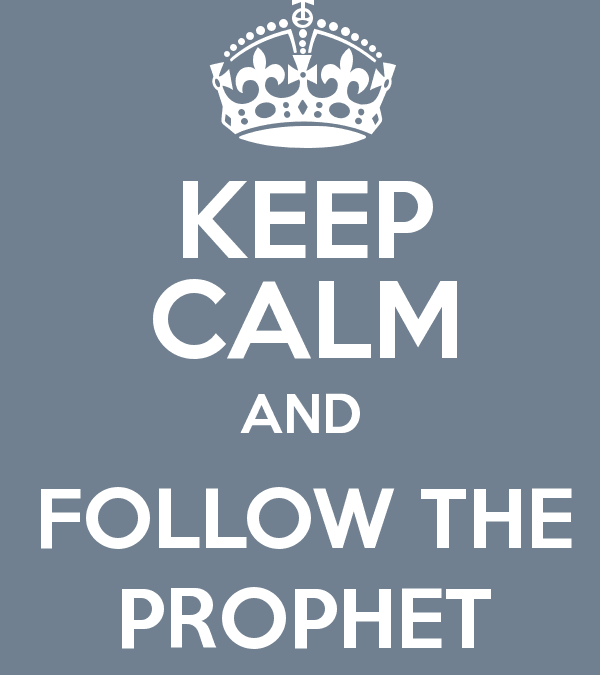 Being a parent features many cringe-inducing experiences. For my wife and I, one of those cringe-worthy moments was when we were at the home of my non-LDS parents-in-law and my children spontaneously decided to march around singing (at the top of their lungs) the Primary song “Follow the Prophet”:

The combination of the words, the marching, and the tune that sounds like it was adapted from a Soviet propaganda film doesn’t do me any favors in the “Honest, Mom and Dad, your daughter didn’t join a cult” department.

A few weeks ago I was playing piano for Primary sharing time when (surprise!) we sang “Follow the Prophet.” When not imagining the children on a long march through Siberia, I scanned the verses and reflected upon the various prophets that the children are urged to follow:

While we’re at it, let’s keep going down the list, just sticking with the Old Testament for now. Jacob deceives, Joseph deceives, Joshua commits genocide, David commits adultery, Elisha summons bears to kill forty-two children for calling him bald—and these are the good guys!

The stunning thing is that this was the narrative that was consciously preserved and held sacred by the Jews and then adopted by Christians—and now Latter-day Saints—as a meaningful and faith-promoting record of humanity’s relationship with God. If there was ever written a tell-all history with warts and all, the Old Testament is it. And it’s the prophets who often wear the warts.

In the very first revelation that the Lord gave to the organized Church of Christ in 1830, he spoke of what it means for us to follow a living, human prophet: “Wherefore, meaning the church, thou shall give heed unto all his words and commandments which he shall give unto you as he receiveth them, walking in all holiness before me; For his word ye shall receive, as if from mine own mouth, in all patience and faith” (D&C 21:4-5, emphasis added). As Latter-day Saints we have generally emphasized following the prophet in faith. But what does it mean for us to follow the Lord’s counsel to be patient with our prophets?

I believe the Lord has called prophets and apostles in modern times who are reliable guides for a life of faith in an age of doubt. I’m actually pleased that in a time when “every man walketh in his own way, and after the image of his own god” (D&C 1:16), my kids are learning to “Follow the Prophet” (annoyingly catchy tune and social embarrassments notwithstanding).

I don’t follow the prophets because they know the way. I follow the prophets because—and insofar as—they know the Way. Human prophets are only worth following when they point toward the Way, the Truth, and the Life. I follow them as apostles—messengers and witnesses—of the Lord Jesus Christ. I follow their lead, because they lead me to God. In actuality, it’s not really the prophets at all that I am following. I am responding to Christ’s invitation to follow him, and doing so in the company of fellow disciples, some of whom have been specially called by him to help lead the pack in our collective journey.

In a worldwide church when so few of us ever meet—let alone actually get to know—an apostle or prophet, the natural tendency is to turn them into spiritual celebrities (just like all the other people we only “know” from TV) and elevate them to demigod status. If we’re being honest, we must confess that the church leaders themselves have contributed significantly to this culture of adulation of the prophet in Salt Lake, that has at times obscured our adoration of the Prophet of Nazareth. To their credit, each and every one of our modern prophets and apostles would denounce such a thing with all the sincerity of their soul, and insist that salvation comes not through prophets but only through Christ. That undiluted, uncompromising testimony of Jesus is what gives them the spirit of prophecy.

One of the challenges of twenty-first-century Mormonism will be to develop a better theology of prophets and prophethood. We know they are mortal, we know they are fallible, we know there have been some real doozies in the past that we’re still suffering fallout from. (Let’s just say, 1850s Mormonism was not our best vintage.) So what does that mean, and how do we move forward without the cultural fiction of infallibility but with a steadfast faith that God can call the weak things of the world to be our inspired guides? In the meantime, while our theologians get to work—and yes, this is a call for Mormon theology—God has given the rest of us in the church a job to do. It is to be Christians.

The Lord told us how. On September 11, 1831, he informed the church that their prophet, Joseph Smith, “has sinned” (D&C 64:7). I’m not sure what Joseph had done to get called out like that, but can you imagine Official Declaration 3 or Section 139—whatever and whenever it will be—starting out that way? Anyhow, God tells the Saints what to do In Case of Prophetic Fallibility:

My disciples, in days of old, sought occasion against one another and forgave not one another in their hearts; and for this evil they were afflicted and sorely chastened.

Wherefore, I say unto you, that ye ought to forgive one another; for he that forgiveth not his brother his trespasses standeth condemned before the Lord; for there remaineth in him the greater sin.

Forgiveness is not easy or cheap. Forgiveness does not ignore pain, suffering, and sin—it stares it straight in the eye and declares that it will not triumph, not in a universe ruled by Christ. So following the prophet, especially when it demands our forgiveness in addition to our patience and faith, is first and foremost the call to be a Christian.

[Patrick Mason is the author of Planted: Belief and Belonging in an Age of Doubt, published by the Neal A. Maxwell Institute for Religious Scholarship and Deseret Book, from which this post was (rather liberally) adapted.]

Patrick Mason is Howard W. Hunter Chair of Mormon Studies and associate professor of Religion at Claremont Graduate University. He and co-author David Pulsipher are currently writing a book articulating a Mormon theology and ethic of peace and nonviolence.

All posts by Patrick Mason