Fix the Church with This One Weird Trick 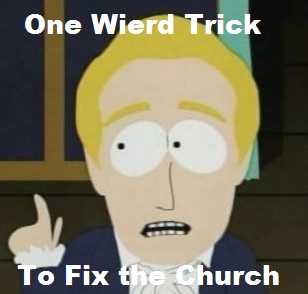 Former Church Historian Marlin K. Jensen was asked, “Has the church seen the effects of Google on membership? It seems like the people who I talk to about church history are people who find out and leave quickly. Is the church aware of that problem? What about the people who are already leaving in droves?” His reply: The fifteen men really do know, and they really care. And they realize that maybe since Kirtland, we never have had a period of, I’ll call it apostasy, like we’re having right now; largely over these issues.” He then said that the Church would begin to release answers to these “issues” on LDS.org, which I think we can assume are the essays that are currently being released.

I think the Church is handling this in exactly the wrong way. Yes, the issues need to be addressed. Many members have never been told about them. President Packer said, “There is a temptation for the writer or the teacher of Church history to want to tell everything, whether it is worthy or faith promoting or not. Some things that are true are not very useful.” That philosophy has filtered down through correlation and created a group of Mormons that don’t know the complete picture of Church History. Many members claim that they no longer believe in the Church because of what they’ve learned about Polygamy. The problem isn’t necessarily with Polygamy itself. It’s that people didn’t know about it, or didn’t know the details of it. Anti-Mormon literature often feeds on the things that believing members don’t know. The anti-Mormon literature that uses things that Mormons are already comfortable with causes no problems. It might be a problem for potential converts, but not for lifelong Mormons.

And so I propose a change: don’t teach these things as “problems” or “issues.” Don’t save them for LDS.org, or special adult classes to discuss them. That just keeps them as “issues.” Teach them to the youngest possible age group. I was taught about the loss of the 116 pages and Peter denying Christ from as far back as I can remember. These are not “issues,” they’re just part of scripture. You might think this sounds like indoctrination. That might be the case; I’m not here to judge. If it is indoctrination it’s already happening. I’m just proposing that we use similar teaching methods while including a more complete picture of history. If the ideas and events have already been taught then they are no longer new or shocking.

How do we teach our youth then about how our doctrine of blacks and the Priesthood has changed? Or that we now reject the Adam-God theory? Doesn’t this create a problem for believing in living Prophets? Only if they want it to be a problem. Elder Oaks said, “[U]nlike other organizations that can change their policies and even their doctrines, our policies are determined by the truths God has identified as unchangeable.” Are we fundamentalist Protestants believing in the unchanging completeness of the Bible? Are we fundamentalist Mormons clinging to Joseph Smith’s teachings and rejecting new ones? Do we not believe in continuing revelation? The key is to leave behind the idea of unchanging Mormon Doctrine, and to teach changing doctrine. God’s eternal doctrine does not change, but the church’s doctrine does and should change. Our doctrine changes to continually evolve to bring us closer to God’s eternal truths. We are not afraid of change, we embrace change. Some, like Elder Oaks, have chosen to rest in the comfort of unchanging truth rather than to believe in new revealed doctrine.

Continuing revelation does not reject our current leaders, it embraces them. We hunger for new revelation to teach us new revealed truths and to reject the old. We are not Protestants, we’re Mormons. Our current scripture and doctrine and policy is not enough, and nor will it be. It’s time to believe in Mormonism again. To return to the roots of Mormonism: the journey for Truth and continuing revelation. We must teach the truth: all of it. And we must expect revelation. Otherwise our Church’s “issues” will only continue to grow.