Exorcising demons of the past 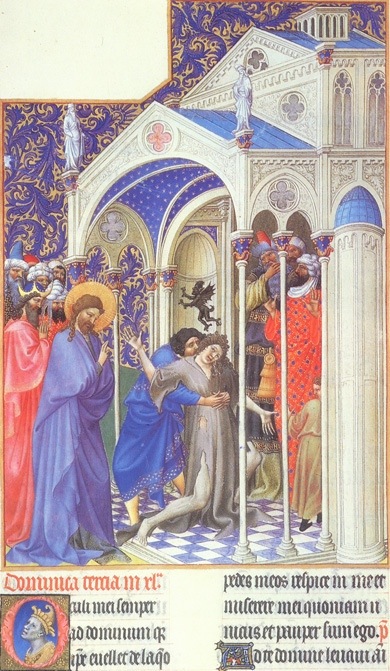 Matthew 17:15- “Lord, have mercy on my son: for he is lunatick, and sore vexed: for oft times he falleth into the fire, and oft into the water.”

Witnessing a seizure is a very frightening experience. Parents who witness seizures in children fear for their child’s life. It is extremely traumatic. Even now, as a trained professional, knowing all the steps I could ever need to take care of the problem, I will feel my heart rate climb with a knot in my stomach as adrenaline starts to flood my system to this day.

So it’s not surprising that in the past, seizures were thought to be caused by demonic possession. Many an epileptic in the middle ages were treated with exorcism.

More recently, many in the scientific world have tried to paint religion itself as founded on epilepsy and a diseased mind, as the religious experience of everyone from Mohammed to Joan of Arc to Joseph Smith have been ascribed to an epileptic fit.  Unfortunately, the EEG was not hooked up during the first vision or Moroni’s appearances, so the world may never know.  This is not to say that seizures with a religious/spiritual component do not exist.  They are unusual.  They are called ecstatic seizures.  They rare enough to be newsworthy and written up into case reports, though too rare to be easily studied.  19th century Russian author Fyodor Dostoevsky is probably the most famous to describe such seizures firsthand.

” For several instants I experience a happiness that is impossible in an ordinary state, and of which other people have no conception. I feel full harmony in myself and in the whole world, and the feeling is so strong and sweet that for a few seconds of such bliss one could give up ten years of life, perhaps all of life.  I felt that heaven descended to earth and swallowed me. I really attained god and was imbued with him. All of you healthy people don’t even suspect what happiness is , that happiness that we epileptics experience for a second before an attack.”

Generally ecstatic seizures involve an out of body sensation. Formed visions have also happened, but are extremely rare.  When the occur they are always the same with each seizure.  In Joseph Smith’s case they would have to have happened conveniently at the end of prayers, at meetings, and to witnesses besides himself, so I think it’s safe to say his visions were not epilepsy.  However, the insinuation and prejudice against the “diseased mind” are still very much at play in these modern science based accusations. It seems even the secular atheists still want to call those they feel are deluded  simply possessed by our modern day demons.

With the advent of modern medicine we have started to get a handle on what is happening in the brain during a seizure. We know a little group of renegade neurons somewhere in the brain start a regular firing pattern that recruits more and more of the brain until the signal grows so strong it wipes out regular brain activity. The tendency for this to happen periodically is known as epilepsy.

When interviewing the general public, however, an amazing amount of stigma remains in regard to epilepsy. This has generally improved slowly over time. In 1949, a Gallup poll revealed 57% of Americans thought epilepsy was a form of insanity, our own modern day equivalent of demonic possession. By 1979, the percentage decreased to around 8%.

In 1949, only 45% of people thought an epileptic could hold employment. Today 80% believe an epileptic can work. Still, finding employment can be difficult when one in five potential employers thinks you are inelegible to start with. In 1987, 92% of Americans were aware of epilepsy, a third of those surveyed thought epilepsy made other people think less of them or their families, and 12% thought people with epilepsy should never have children.

Considering how most epilepsy is quite treatable and controllable, and not genetically acquired in the vast majority, that last statistic is one of the most troubling. Even in our “enlightened” age, so many of us are troubled by the possessed. Many don’t want to see them propogate their inferior genes, or trouble us in the workplace.

Even worse is epilepsy as seen through the eyes of a child’s peer group. In 2006, a study by C. Cheung in the Journal of Child Neurology found that when asked, most teenagers agreed that Epilepsy commonly causes mental handicap, frequently leads to self injury and death, that people often injure bystanders when having a seizure, and that persons with epilepsy are less honest, popular, fun, and adept at sports than other teens.

In case you were wondering, all of these impressions are wildly exaggerated and not supported by reality. The fact is any of us, in the right circumstances and conditions can have a seizure. The dividing line between us and epileptics is actually that the seizures haven’t happened to “regular, healthy people” yet. But don’t fear, epilepsy ocurrence spikes a second time after childhood in old age. We all may all yet get our chance.

The vast majority of people are not killed or injured by their seizures. Such events are rare. Even more rare is being injured by standing next to someone with a seizure. Yet, so many fear that the demons are contagious.

These teenagers considered Epilepsy as socially disabling as HIV infection or leukemia, ranking it worse than any condition other than Down syndrome. It was considered worse than asthma, diabetes, migraines, or arthritis.

This perceived stigma aggravates real problems as a child ages. Parents that fear their child is dying subtly lower their expectations for the child. Very often, children with seizures acquire vulnerable child syndrome, even when their seizures stop and they go off of medications as they grow up.

The end result is that even in this majority of epileptics, devoid of medication or seizures for many years, unemployment is higher. They are less likely to go to college than people of the same socioeconomic background and intelligence. They are less likely to marry or have children (silanpaa M, shinnar S, NEJM 1998; 38:708). In the end, it seems those 12% who want to stop epilepsy gene spread and contact in the workplace are winning. It is aggravating as a child neurologist to know that even when I have done my job and stopped the demons, the stigma continues to limit these children far beyond what their condition demands. In the end, curing the disease is not enough. The demons will continue to haunt them even after the body is healed. My question is, whose demons are they, theirs or the rest of society? It is evident to me that we are not as far beyond the superstition and misunderstanding of ages past as we would like to believe.