Evolving Faith: Wanderings of an Mormon Biologist – A Review 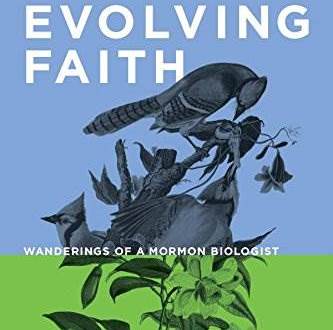 Steve Peck is one eclectic dude. The same guy that uses complex computer models to study evolutionary biology and researches tsetse flies for a living also writes fictional stories featuring characters like the Oxford failed conjoined twins (with a third conscious center comprised of a neural mass) living a cowboy life in Moab Utah, or a poor Soren Johansson who died early from brain cancer to find out that Zoroastrianism was the one true religion and he was stuck in an infinitely (effectively) large library condemned to the most mundane and impossible task imaginable before he could be released from this hell.  Well beyond that he dabbles in philosophy and theology (when I say dabble I mean to indicate that his works are published in top journals/venues, even his poetry has been published in Nature). So with a guy like this I didn’t know quite what to expect in his writing for this volume.

By way of critique I have to say that it is not clear who the audience for this book is. An essay collection, which is precisely what Evolving Faith is, can be quite coherent if the essay writer(s) has the collected works in mind. In this case the original writings span more than a decade and come from a range of different sources. So it is understandable that some towards the beginning are suited to a group of students in a selected readings of contemporary philosophy course and others towards the end are more of a general audience type of work (accessible to all that are literate). While I can understand the variance in the type of language used in each essay as well as the expected language/understanding/education of the reader for each essay, I think this volume could have benefited from more editing/curation than it has. I have a hard time imagining the typical undergrad confused by the disparate messages of the religion courses and science courses being able to wade through the ideas, arguments/logic, and vocabulary employed in many of the first few chapters.

Perhaps I don’t give enough credit to current students of science and religion but I know that a decade ago, when an LDS Institute instructor refused to retreat from his literalistic stance on the relative timing of death on earth and Adam’s Fall while I was taking geology courses, many of Peck’s essays would not have penetrated my thick skull. Though according to the Maxwell Institute the “Living Faith books are for readers who cherish the life of the mind and the things of the Spirit.” In this case the focus is not necessarily on the troubled college student but I suppose any Mormon who likes to think deeply and maintain a religiously devoted life. With that objective in hand I assume the primary readers of this book will be fellow scientifically literate theologians (as I view Peck to be) or those who happen to have a deep interest in philosophy outside of their formal education/training/profession.

If that is the case I think this book can be viewed in two ways (though I’m always open to more options than two). (1) Evolving Faith will confirm the reader’s scientific/religious worldview and perhaps stretch or illuminate particular ideas, or (2) the budding scholar will trudge through the book to find (and extract) the gems they are looking for and can revisit the more dense parts later as their interest in ontology, teleology and other fun words emerges later in life. I find myself somewhere between the two crowds as my interest in philosophy has been piqued only in recent years now that my formal education in science has been completed.

The first few chapters (2-5) are pretty heavy on philosophy and might discourage readers that were expecting a playbook in “advocating science in the 21st century.” Rather, we find deep and challenging ideas and paradigms that cause one to rethink what it means to know, and rethink the ideas that have been thought of as “scientific” but perhaps are merely “just-so” stories that make sense to us and our model of the world or are extrapolations that happen to sound like science. What Peck does is thoroughly define science’s boundaries and what its limitations are. He also points out that many statements from popular scientists are not actually objective scientific statements but rather subjective leaps of faith, not unlike ideas we hear at church.

He takes a great deal of time delineating between subjective and objective truth. He makes it clear that the subjective and objective are not to be equated but that the subjective is not to be disregarded either. I recently read Being Wrong by Kathryn Schulz who like Peck showed just how hard it is to get at objective truth. By its own definition it seems like it might actually be impossible to posses for according to Webster’s English dictionary to be objective is to have reality independent of the mind. How do we gain access to something that must be separate from our mind when the very thing we use to access it is our mind? This might seem like silly splitting of hairs but it is ideas like this that keep me from claiming to ‘know’ many things and helps me realize that much of our knowledge is often a blend of objective and subjective truths. Because we use models of the world to understand it we often confuse our model of reality for reality, meaning we readily confuse our subjective understanding with our objective understanding.

My one critique of or dissent from Peckianism is that I do not like attaching the word truth to subjective. I think our subjective experience is incredibly important to each of us and I do not mean to denigrate it in any way, but truth is a weighty word and should be something we strive for rather than claim to have, even if we throw the word subjective in front of it. It is important to look for counterexamples to our claims, analogous to falsifying our hypothesis, because many subjective experiences can be lovely, others are not, and I find it problematic to elevate them to the status of ‘truth.’ For example, one of the problems of the Salem Witch trials was the inclusion of subjective ghostly visions as evidence and those subjective truths helped expedite the unnecessary death of some poor innocent souls. It is instances like these that cause my hackles to raise when I see subjective and truth put together. I’d prefer to revere and cherish my own positive subjective precious moments but I am not going to call them truth of any sort.

Evolving Faith is not just a collection of “deep thoughts” it is a highly personal journey put out there for all to see. Steve tells a story of being embarrassed at his tuna salad lunch one day. It wasn’t that the lunch wasn’t good enough for him but rather that the realization of the ecological cost (isn’t the amount of packaging  for many meals designed for rapid consumption just ridiculous?) as well as the erasure of any sign of life or death found in his lunch (we forget that there is no such thing as life sustaining food without death of another life) that left him feeling at odds with his ideals. I have had similar moments and probably need to have more in order to provoke me to make a more meaningful and lasting change. Our modern world of packaged and processed everything separates us from how the real world works. In order for us to live other things must die, whether animal or plant there is a cost of life associated with every single day of our continued existence, and sadly the further we remove ourselves from that experience of seeing life snuffed out in order to live our own life serves to thicken the calluses on our soul and prevents us from noticing the unnecessary destruction that follows our march toward ‘progress.’ Seeing life taken sobers us and makes us rethink and re-evaluate the choices we make.

There are lots of well written bits in the book worth quoting that represent Peck’s sentiments. One regarding evolution and how it makes him feel about the rest of creation:

“Evolutionary views of creation also steer us into deeper engagement with the natural world, as we see ourselves quite literally connected to the creatures and ecologies around us.”

Another expresses, I think, his understanding that at times God is indeed distant but also that God wants us and needs us to carry out his work anyway:

“. . . much of how God works in the world seems to be that he communicates to and through conscious beings who then use their agency to act. Stories of people inspired to stop and help a widow take on new meaning if God cannot help the widow without us.”

An aspect of the Peck’s story telling that I really identify with in the final sections is the stories of rural Utah. I grew up in semi-rural Davis county (it isn’t rural at all any more but in the 90’s is was) and can recall similar tales. I also spent many vacations in my youth and nearly every spring break in college down in southern Utah exploring Arches National Park or the canyons surrounding Escalante. Seemingly barren vistas and red rocks have a special place in my heart. The starkness of the desert is sacred. It is a place I miss greatly having lived in the plains of the mid-west for over 7 years now. While reading about his exploration of a new canyon in the Moab area I became so jealous. It brought back good times finding zebra slot canyon or taking the dog with us through Bell and Little Wild Horse Canyons and also that time that my brother and I slept in the back of my truck in an unofficial garbage dump (we didn’t realize that at the time but we also weren’t about to find a campground at 1 am either) and being forced to cut our hiking plans short due to poorly cooked chicken legs (my bad Max), but that is a story for another day.

For me, Evolving Faith represents an ideal way to go about life. Think hard, rigorously, and deeply but also take time to enjoy the moment, go exploring, and strive to suffer the unexpected and undesired pain of life. Keep learning, keep feeling, keep going.

Note: There is much much more I’d like to say about this book and so many questions I have for Steve. It is very thought provoking and did cause me to shift in some of my positions a bit. But who wants to read a super duper long book review? Not me.