Elder Oaks Adds to the Scriptures 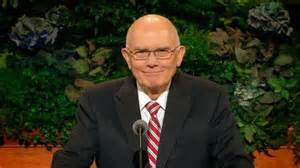 But last Saturday was different. In the afternoon session, Elder Oaks served up a lukewarm homily about how Mormons can show true love for their neighbors by publicly backing the Church’s anti-gay marriage agenda.

This type of message from Elder Oaks hardly raises an eyebrow anymore, so firmly has he snugged on Elder Packer’s tattered cowboy boots. It was the three words Elder Oaks added to the scriptures in the middle of his talk that caught my attention, though.

I. The Woman Taken in Adultery

Elder Oaks introduced the story at the 5:10 mark, speaking of “the woman who had been taken in adultery, in the very act. When shamed with their own hypocrisy, the accusers withdrew and left Jesus alone with the woman.

“He treated her with kindness by declining to condemn her at that time, but he also firmly directed her to sin no more.”

My wife and I looked at each other. “What on earth did he mean by that?” is a moderately altered version of what I asked out loud. “Why would he add those three words to the story?” 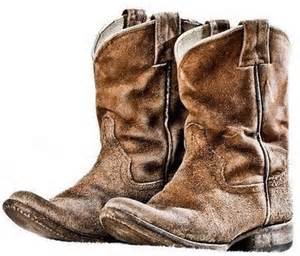 Both my wife and I were surprised by the extra-scriptural addition.

First, we have to understand that those words are found nowhere in the story, nor is there anything in the story to suggest that Jesus did something other than simply forgive the woman on the spot.

So why say that Jesus “treated her kindly by declining to condemn her at that time”?

Is Elder Oaks saying that Jesus will condemn her, but just not “at that time?” What “other time” could Elder Oaks be referring to? Is he saying there will still be a score to settle when Jesus comes again in glory? Is he saying there is an unrecorded story that happened subsequently where this woman underwent some form of Church discipline?

It was that last question that tripped the light-bulb for me.

This story standing alone seems not good enough for Elder Oaks. “At that time” must be added to restore the proper LDS disciplinary balance. Adultery is a serious sin. An adulteress in the LDS Church must go through a Church court, receive some form of discipline, and work her way back into the good graces of the Church.

But none of that happens in the story of the woman taken in adultery. Jesus just forgives her. On the spot. Case closed. No Church court. No discipline. No probation. Nada.

It seems this is too simple for Elder Oaks. There must be something more than just forgiveness. It can’t be that easy. The woman must have undergone Church discipline at some point and worked her way back into God’s favor by appeasing her priesthood leaders with a trail of tears. But none of that is recorded in the New Testament. Is that why Elder Oaks added the words, “at that time”?

At its heart, the story of the woman taken in adultery is a bugbear to those who believe forgiveness can be mediated only through a formalized Church disciplinary process. The story must not be allowed to stand unchallenged. The words must be modified.

Perhaps most disturbingly, with the addition of these three words, Elder Oaks seems to put himself squarely in the camp of the stone-throwers. A penalty must be paid. Not death perhaps, but some form of Church discipline. Only Elder Oaks is not ashamed into retreat by Jesus’s challenge that he who is without sin should cast the first stone. Perhaps this is because it is not proper to criticize Church leaders—even if the criticism is true.

II. The Parable of the Prodigal Son

Todd Compton observed a similar type of unconditional forgiveness in the parable of the prodigal son:

“In dealing with sexual transgression, Christ evidently would teach complete forgiveness and forgetting of the transgression for the repentant sinners; the value of the returning son is much greater than his mistakes. Furthermore, the loving father does not require the prodigal son to undergo an extended and humiliating public probation before he receives forgiveness; he is not accepted under a cloud; he does not have to wear a scarlet A on his clothes. Forgiveness, in the parable, is immediate and total.”[i]

As with the parable of the prodigal son, so with the story of the woman taken in adultery—Forgiveness is immediate and total.

III. The Sons of Mosiah

In a recent Mormon Stories interview, Brent Metcalf told of the disciplinary council that resulted in his excommunication. Brent’s stake president approached him after the proceeding and told Brent he hoped Brent would come back to full activity in the Church and do much good, like the sons of Mosiah.

Brent looked his stake president in the eye and silenced him with the words, “There’s just one difference—the sons of Mosiah weren’t excommunicated.” 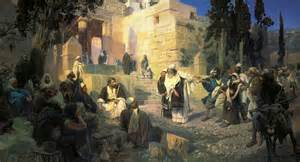 Is this what is behind Elder Oaks’ adding those three words to the story of the woman taken in adultery?

Why should we feel indignant or upset that Jesus can forgive sins outside a structured process administered by Church priesthood leaders? Is this not why the scribes and Pharisees got so mad at Jesus? “Who is this who is speaking blasphemies? Who can forgive sins but God alone?” (Luke 5:21). The scribes and Pharisees knew that forgiveness of sins came from God alone, but only through the structured process of temple sacrifice God had instituted through Moses. Where did Jesus get off saying he forgave sins apart from the established priesthood practices and procedures?

How could Jesus simply forgive the woman on the spot? Could he see into her heart that she was truly remorseful and repentant? Was his grace sufficient to cover her transgression with no strings attached? Could he tell she wasn’t just pretending to be remorseful in order to receive “cheap grace” and go out and continue her sinful ways?

If so, why cannot LDS priesthood leaders do the same? Why can they not use the spirit of discernment? Are they not denominated judges in Israel?

And is the modern LDS discipline process a tacit admission that the spirit of discernment is fled by which a priesthood holder may look upon the hearts of the penitent to forgive those who are truly remorseful, but instead put all through a rigorous re-unification program that the sincere may be made known by their works? Is this what requires the modification of the story of the woman taken in adultery?

VI. Who was that Woman I saw you with last night?

The historical context of Elder Oaks’ recasting of the scriptures must be taken into account. Only half a year ago, Elder Oaks was speaking from the same pulpit in General Conference Priesthood session explaining why it is that though women in the Church exercise priesthood power, they nevertheless cannot hold priesthood office, and certainly cannot be allowed into the Priesthood meeting. All this while members of Ordain Women were waiting for the second time in the stand-by line a stone’s throw away fruitlessly seeking admission.

What has happened in the interim? Well, for starters, some members of Ordain Women have been excommunicated or faced other Church discipline for their activities–activities which most would rank lower on the sin-scale than adultery.

How does this compare with the story of the woman taken in adultery? And what is that story about? The core of the story is about how Jesus rescued a woman from the hands of a mob of angry men determined to execute the penalty required by their religious code–the ancient version of the Church Handbook of Instruction.

Where was Jesus when Ordain Women members faced a similar scene? Where were the apostles? Where was Elder Oaks? Like Saul of Tarsus, Elder Oaks seems to have stood by as a silent witness and held the cloaks of those who did the stoning.

Viewed in this light, it is possible to see why Elder Oaks might be uncomfortable with the implications of the story of the woman taken in adultery, especially at this particular juncture, and why it is he felt the need to add those three words—“He treated her with kindness by declining to condemn her at that time.”

Viewed in this light, it is also possible to see how Elder Oaks may have added those three words as a justification of Church disciplinary action against some followers of Ordain Women.

In summary, Elder Oaks’ address raises more questions than answers. It is possible Elder Oaks meant none of the things proposed above when he added those three words to the story; although Elder Oaks is by profession an attorney, and attorneys tend to choose their words with care.

It is impossible to say for sure, because general authorities have removed themselves so far from the general membership of the Church that questions for clarification are not well-received and seldom answered. And so we are left to examine the words of Elder Oaks’ conference address for meaning, somewhat like scrutinizing the viscera of slaughtered chickens to divine the will of the gods who sit ensconced in the everlasting hills.

But it is also possible that by adding those three words, Elder Oaks has revealed more about himself than about Jesus. And it is possible that, after centuries of languishing in obscurity, Elder Oaks has finally revealed the name of the woman whom Jesus “treated with kindness by declining to condemn her at that time.”

She who has ears to hear, let her hear.