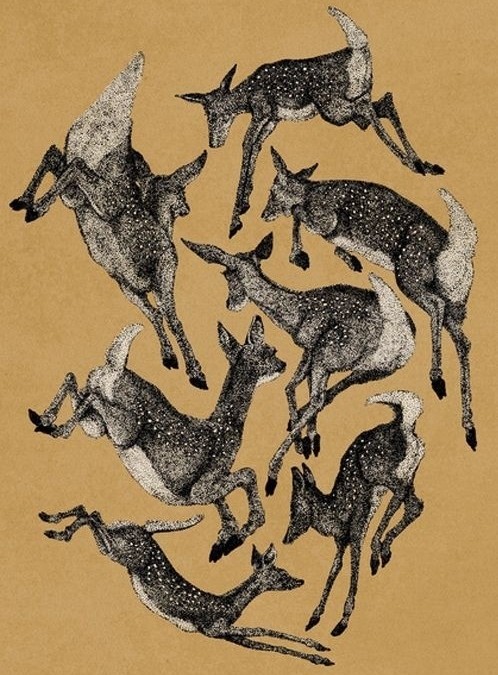 This is a story told by my father about an experience he had on Christmas Eve, although it is not a Christmas story. I was immediately struck by the allegorical implications, so while you read I invite you to consider the meaning of these four symbols: the fence, the deer, my father, and the knife.

‘Twas the night before Christmas 2015 and I had worked all day in my new shop getting it ready for the finish work we have yet to do in our newly remodeled house. I thought I would go home early so that Diane & I could enjoy putting a puzzle together. (That’s quite a switch from years past when we were busy with gift-wrapping and riddle writing late into the night.) Even still it was nearly 6:30 when I found a stopping place and turned the furnace down and the lights off and headed down the long driveway to the gate where my truck was parked.

It was quite dark but the moon was bright enough to give direction to my footsteps. Contemplating what the evening was going to bring as we prepare our thoughts for the commemoration of the birth of the Savior of the World, my thoughts were interrupted by a subtle rustling ahead near the gate. “What could it be” I wondered? As I looked closely I could clearly make out the shape of a deer.

Was I in danger? Was it cornered and couldn’t get past me? Things happened quickly as it became clear that this deer could not move from its place but only thrash about. It was in an odd position and could not leave the spot where it lay. Its hind legs were elevated high leaving its head down near the pavement. Quickly the scene dawned on my understanding: this deer had tried to jump the gate to get into the back yard where the apples and other things to eat were, and somehow got tripped up. Her back legs didn’t make it over the gate. She was caught and was caught tight enough that her thrashing could not break her loose and send her on her way. It was also evident that she had been there for some time. She was tired and could not stay up on her front legs for long but would lay her head down on the pavement to rest from her struggles.

How could I help? If I tried to help would I be hurt? Should I go for help? What should I do? Immediately I began talking to the deer. I spoke in a calm voice saying that I wanted to help her. As I spoke I moved closer until I was close enough to reach out and touch her on her rump. She did not flinch. She did not thrash to try to get away from me. I kept talking as calmly as I could – and she responded as though she understood the gravity of the situation and that she would welcome my help.

Slowly and calmly I came closer and cradled her back legs in my arms. It was then that I noticed that she was not just caught but impaled! One of the decorative tips along the rim of the scalloped top of the gate had pierced through the flesh of her right rear leg. She was bloody but blood was not surging. The spire had protruded through the flesh and was sticking out of the top part of her leg.

I had to get her off. I wasn’t sure if I could lift her and free her from this trap that would certainly end her life if she could not be freed, but I had to try. Occasionally she would turn her head and raise it up as if she wanted to see, but for the most part she remained calm and still. She was not a small deer, not a yearling but a full sized adult white-tailed mule deer. I got my feet firmly below me and positioned myself to lift with a good amount of strength. I proceeded slowly and applied some force – no response from the deer. I increased my effort giving full strength to lifting the deer up off the tapered spire that was acting like an arrow tip or the barb of a fishhook. There was nothing, not even the slightest movement to give me hope that I could do this but I tried again and again. Nothing moved. My hands were now covered with her blood and were warmed by the warmth of her body.

As my mind searched for answers about how I could help her best and quickest. Thoughts of levers or winches or rousing the neighbors on Christmas Eve dimmed as I came to realize that I had to cut her loose. I got out my trusty Leatherman tool and opened it up. What would this deer’s response be to this? I proceeded slowly and inserted the knife blade down alongside the gate spike and tried to cut the hide. It was not easily cut. With great effort I made a little progress as the flesh gave way to the blade of the knife. The deer remained motionless and soundless, as if to say ‘you have my trust’. With greater effort I proceeded. It seemed to me that not only was I cutting the furry hide but that tissue and sinew were in the path of the blade as well. The knife and both of my hands were covered in blood. The deer remained still. As I made my final thrust I cast my knife behind me on the pavement out of harm’s way for what might happen next. I then used both hands to lift gently and position the leg free of entrapment. Guiding the leg past the steel posts of the fence I was quite aware of the deer’s desire to take back control of her leg and I released hold of the leg to the freedom we both sought.

Without hesitation the deer took over. She put all four hoofs under her and leapt about for about half a second and then bounded off down the driveway to the rear of the house. She seemed to move without the reluctance I expected. Her head held high and she glided with the flow that deer are so famous for. It was a beauty to behold. A man being injured like that might have been able to limp but certainly not leap. I watched her bound out of sight – but not out of mind. My whole body seemed to be caught up in this most unusual experience. It was more than just a thought that my mind experienced; my whole self participated in an event not to be forgotten. Fear and faith and humility filled the fabric of my soul as this life-changing moment transpired – an exchange of thought and spirit with one of God’s creations – left me in awe of the stamina of life-seeking creatures!

Getting home was not easy. I was bloody and my knife was bloody. As I opened my truck door to go home, I found a gift on the seat from a neighbor. I wiped my hands on the snow and then put the gift and my bloody knife on the passenger’s seat and drove home.
As I entered the house looking like the victim of an accident, I called to Diane “Now don’t be alarmed, but I’ve got something to tell you”. . .