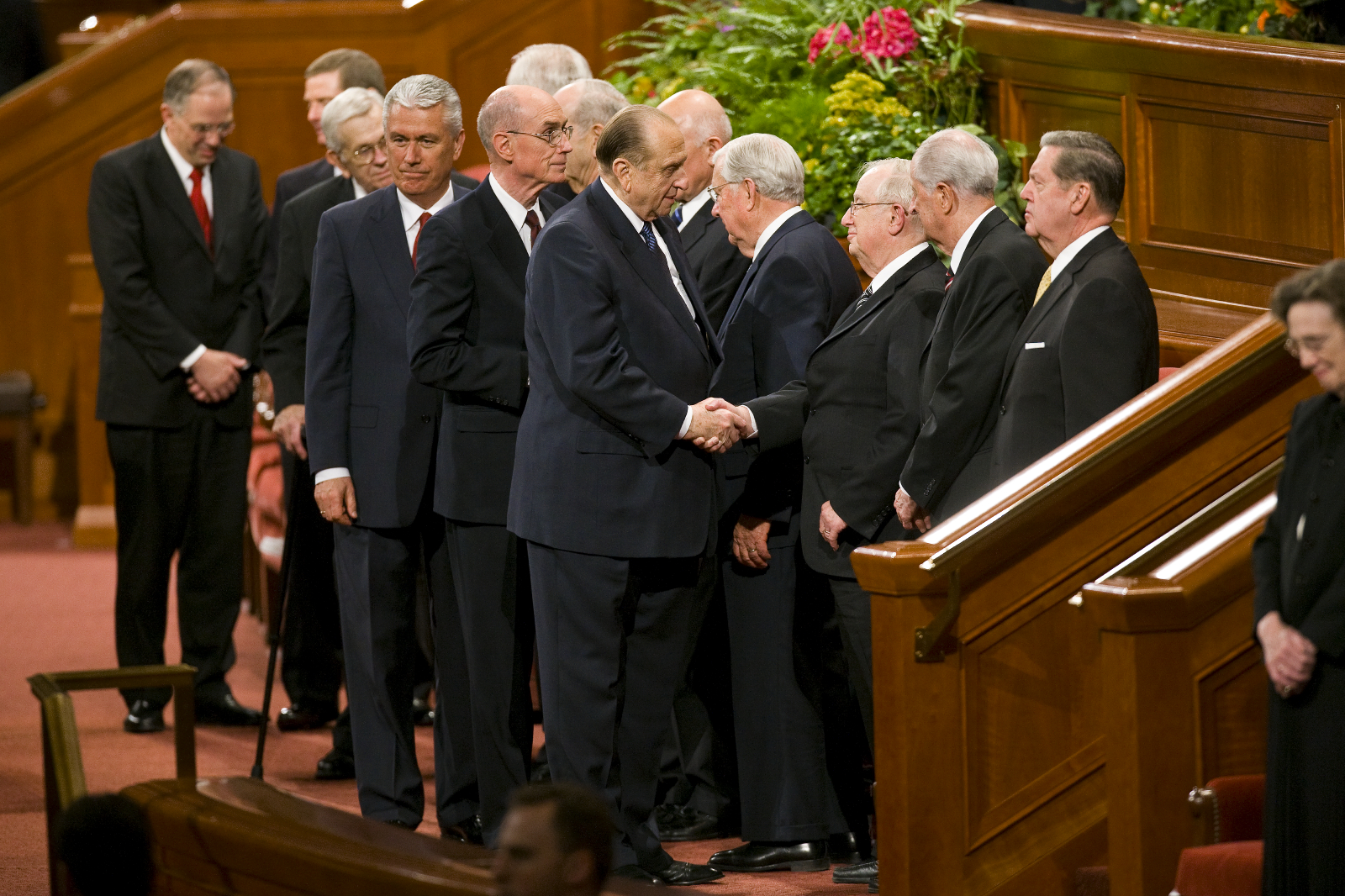 Continuing revelation is the foundation of Mormonism. It is one of the great differences between Mormonism and fundamentalist, “Bible-based” Christian churches. One might assume that having a belief in leaders who receive new revelation from God would push us into the forefront when it comes to progressive policies and doctrines when compared to other Christian religions. However, this belief caused a somewhat unexpected consequence: because past leaders must have been inspired, the past teachings are assumed to have been revealed by God. This has, in part, contributed to a culture of conservative religious ideals. Elder Spencer W. Kimball said that “even in the Church many are prone to garnish the sepulchres of yesterday’s prophets and mentally stone the living ones” (“. . . To His Servants the Prophets,” Instructor, Aug. 1960, p. 257). A changing policy or doctrine is an implicit rejection of past leaders. “Doctrine is eternal truth,” so therefore if our doctrine is changed, our claim to revealed doctrine may be disproved.

How are these beliefs evident in Mormonism by our leaders? After all, what the average member believes doesn’t necessarily affect the revelation of the First Presidency and Quorum of the Twelve. As one example, past statements by Prophets and Apostles were taken as revelation about blacks and the Priesthood by the First Presidency. As the 1949 First Presidency statement said: “The attitude of the Church with reference to Negroes remains as it has always stood. It is not a matter of the declaration of a policy but of direct commandment from the Lord, on which is founded the doctrine of the Church from the days of its organization, to the effect that Negroes may become members of the Church but that they are not entitled to the priesthood at the present time. The prophets of the Lord have made several statements as to the operation of the principle.”

No scriptures were quoted in the letter. Past statements in talks by former leaders were enough to set the policy. Of course, the Priesthood was eventually given to all worthy men. However, it can easily be argued that the process was slowed by the belief that past leaders had it right. These statements, after all, were the justification given for the continuation of the practice.

Gordon B. Hinckley said about receiving revelation for the Church: “Now we don’t need a lot of continuing revelation. We have a great, basic reservoir of revelation. But if a problem arises, as it does occasionally, a vexatious thing with which we have to deal, we go to the Lord in prayer. We discuss it as a First Presidency and as a Council of the Twelve Apostles. We pray about it and then comes the whisperings of a still small voice. And we know the direction we should take and we proceed accordingly.” (Compass Interview with Prophet Gordon B. Hinckley, aired Nov. 9, 1997)

Here President Hinckley stated directly that we don’t need much continuing revelation because we have already received a great reservoir of it. What about when prior revelation, practice, or doctrine is called into question? As President Uchtdorf stated, “We can block the growth and knowledge our Heavenly Father intends for us. How often has the Holy Spirit tried to tell us something we needed to know but couldn’t get past the massive iron gate of what we thought we already knew?” What if we as a society have learned new things, leading to a new evaluation of past thought? Is this God leading our society to new ideas or practices, or are these affronts to our past revelation that should be rejected?

This same pattern of following the prior practice which is assumed to be inspired continues in the matter of female Priesthood ordination. Elder Oaks, in his recent conference address on the topic, stated, “The Lord has directed that only men will be ordained to offices in the priesthood.” No citation was given for this statement. He does go on, however, to quote President J. Reuben Clark saying something similar. He quotes no scripture to support this point in his talk. Past practice, and quotes from former General Authorities, is enough reason to continue the current policy. He does not address any of the possible scriptural precedents of female prophetesses, deacons, or apostles.

Is this culture of respecting past prophets detrimental to the Church as a whole? It is hard to say. Some argue that if the leaders moved too quickly that it would lead to people leaving the Church. I think that takes a very low opinion of Church members. And, after all, respect for our leaders’ revelation is what makes Church members hold to current practice in the first place. There are examples, however, of people leaving the Church, or having doubts, because of seemingly outdated policies and doctrines. Should the Church change just because of these individuals? Of course not. I simply hope that the First Presidency and Quorum of the Twelve are trusting their ability to receive revelation, and not “garnish[ing] the sepulchres of yesterday’s prophets.”