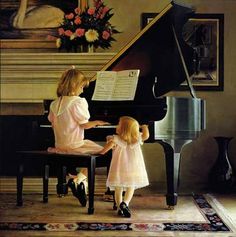 So growing up, I’d never been a big fan of most mainstream LDS art and music. I mean, sure, there was Minerva Teichert and a few choice others, but by and large our most culturally popular art and media tended to be pretty superficial or one-dimensional. Examples I think of are Greg Olson paintings, Michael Mclean songs, Saturday’s Warrior the musical, etc.  Though I do have to say that these examples are also truly sincere and earnest, and very clearly try to reach out to those to whom they are being presented to. That is more than I can say for a lot of better-crafted music and art outside the LDS sphere. I mean, sometimes it’s refreshing to not be surrounded by constant cynicism. In that sense, I occasionally do like to surrender to a simple, lovely painting that doesn’t make me think too hard, but soothes me with soft-focus colors and gentle faces. Or music that is basically just manipulating my emotions with simple, positive lyrics…kind of like an 80’s pop song. Or watch a wholesome, formulaic musical with awesome dancing and tons of delightfully false doctrine I believed in my youth.

Look, I’m not saying any of these things are bad or that we shouldn’t have them. I know there are thousands of people who have been benefited by these works, and I have too from time to time. I just teared up watching the baby be born on Saturday’s Warrior. Maybe it’s my pregnancy hormones, but whatever. However, what always bothered me, was that it felt like there was a surplus of this kind of art as well as a collective nervousness to move beyond this phase into the more complex and powerful purposes art can serve. It might not be as “pretty” anymore, and we might have to look at ourselves more honestly, and that’s something no one likes to do.

When God’s Army came out, there was a collective gasp from the LDS community. I think there were a lot of different reasons for the gasp, but I remember being at BYU when it was just out, and a particular kind of gasp abounded.   People were concerned with the righteousness or appropriateness of it all. Was it appropriate to show an ordinance, and were real missionaries really like the ones in that movie? Real missionaries were supposed to be pitch-perfect…or at least never doubt, and have great hair. 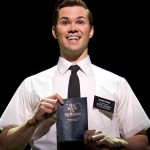 Around the same time we had The Singles Ward come out. Though the plot was still pretty one-dimensional and predictable, it was different in that the humor wasn’t quite as “aww shucks!” as Saturday’s Warrior. The humor this time was self-reflective with a little bite to it. We were laughing at ourselves and our idiosyncrasies as both people and Mormons. Gently, of course, but I think both God’s Army and The Singles Ward showed a growing desire in the general American Mormon populace of reflecting on ourselves just a bit more honestly. Humor is usually a very safe way to do this if it’s not done cruelly, and so we had a surge of “Mormon comedies” using Mormon culture or odd situations with Mormons as their basis. Of course, this got old within a few years as the jokes and stereotypes got recycled and many people I talked with had grown tired of the one-dimensional nature of these films. Not to mention that some of them were just plain…bad.

Honestly back in the day I joined in with many others in my arts major in harping on the ridiculous films made by Halestorm Entertainment, or occasionally on the self-importance of Richard Dutcher. However there is no denying that they opened Mormon media to a greater range of expectations. We were now becoming a little more accustomed to films that had a touch of realism or a bit of self-reflection in them, even if they were still faith-affirming happy-endings as in the film The Best Two Years (one of Halestorm’s better films about a missionary who’s lost his moxy, but of course makes an inspired change by the end.) Without these films, a movie as raw as the Saratov Approach may not have been so well-received.

Even within LDS music there seemed to be just a glimmer among all the very straight-forward EFY-type Mormon pop. As an aside, I used to joke with my mission companions that I could write an EFY song in 5 minutes. Give me 3-4 chords, a few key Gospel words to end phrases with, and then rhyme them. You know, “light”, “night”, “right”, “might.” I’m sure there’s 10 EFY songs in there. However, one artist, Julie De Azevaedo was pointed out by one of my companions when I was complaining. Her music had a lot of traditional themes, but usually with a more self-reflective and personal nature to them. She also had a song about trying to keep up with the Jones’ and the futility of it all. That was a unique thing to hear from an LDS artist at the time, and an issue that is incredibly pertinent to us as a people. I learned years later, that she was a licensed therapist and recently wrote this little diddy to promote her book aimed at Mormon women preventing burnout in their personal life.

Now I’m not saying any of the examples above are great pieces of art that will stand the test of time like Victor Hugo or Mozart, but they give me hope that as a people we are starting to move to a place where we are willing to explore and accept art that is a little more challenging, just a little more reflective of who we are and where our light and darkness lies. Within my studied medium of musical theater, I find that my favorite pieces are those that look at the reality of the darkness and chaos not just around us, but in us, and choose to move through the darkness hoping that there is good we can still choose even if what we see as good has changed because we’ve changed. I will share two of my favorite examples of this in the hopes that one day we’ll have the courage as a people to create art that looks at the darkness of our own choices and finds redemption in the honesty of all that we both do and don’t know.

“No One is Alone” Sondheim, Into the Woods
If you’re not familiar with this musical, you SHOULD be! Without giving too much away, I will simply say that at this point in the show, all the fairy-tale stories have soured because of the reality of choices having consequences. Several other characters have died, and no one is sure of what the right thing to do is anymore.

“Make Our Garden Grow”  Leonard Bernstein, Candide
This is based on the French satire by Voltaire. The full synopsis is here. At this point the two main characters, who were taught life was always pleasant and easy and good, have experienced some of the worst aspects of real life, and make a choice on their new understanding.

Let dreamers dream what worlds they please
Those Edens can’t be found
The sweetest flowers, the fairest trees
Are grown in solid ground
We’re neither pure, nor wise, nor good
We’ll do the best we know
We’ll build our house and chop our wood
And make our garden grow

Oh, just to wrap up, I do totes have a few favorite Mormon artists who  embody many of the the things I love about great art.
Brian Kershisnik
Melissa Leilani Larson (we just did a podcast with her)
Daniel E Borup
Who’s on your list?