Book of Mormon Stylometry in Pictures and Tables 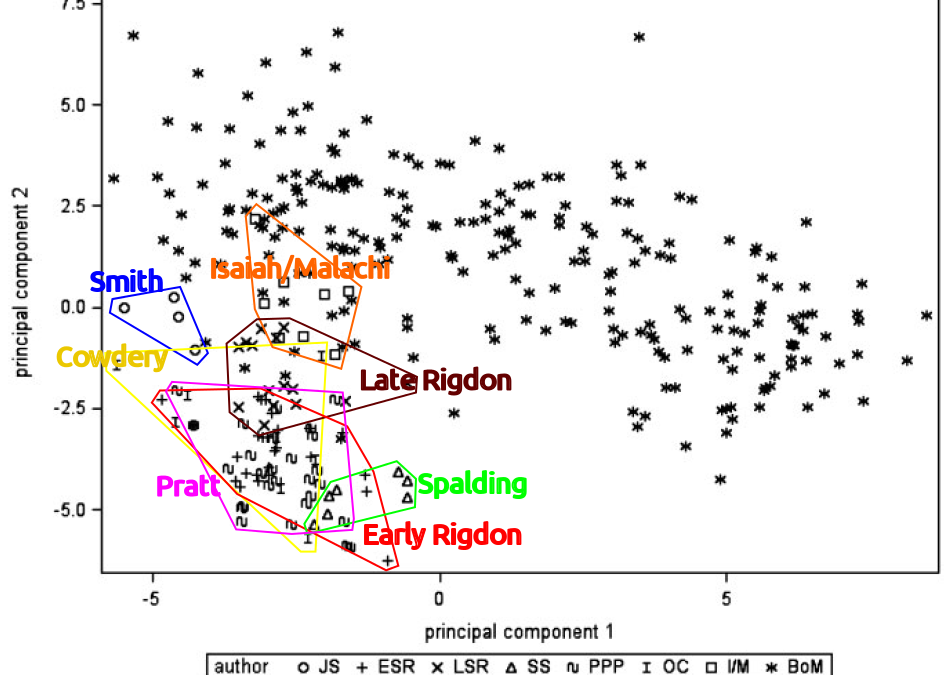 Measuring Style in the Book of Mormon

This blog post is long (3000 words, 28 images), and it is a quick, poor, and short summary of stylometry relevant to the Book of Mormon. I’ve left out some topics that were only covered with words. I’ve not included one Master’s Thesis that I was shown more recently that confirms 19th century word/phrase choice for most of the language used in dictating the Book of Mormon, nor examples showing extensive, anachronistic17th-18th century syntax in the Book of Mormon, but neither of these has significant new impact on what stylometry shows us about the Book of Mormon. It was written by several authors, and we don’t have any other writings from these authors. Enjoy the summary, or head on over here http://www.exploringsainthood.org/measuring-style-in-the-book-of-mormon/ and follow my whole exploration through, or download a pdf of all 22 posts here 4.4 MB PDF

Breaking up the Book of Mormon is a hard question. Here’s how one researcher did it: 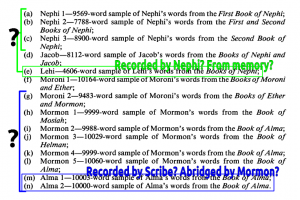 Note that all the segments have close to 10,000 words. This means that there are plenty of words to achieve statistical significance for many kinds of tests and comparisons.

Here’s what that author found: 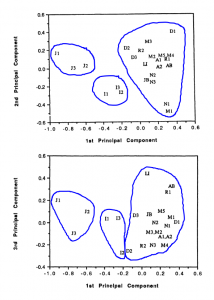 Holmes claimed Joseph had a personal voice, Isaiah had a voice, and all Mormon scripture had one single, additional voice—the prophetic voice of Joseph.

Reexamination of the Principle Component analysis 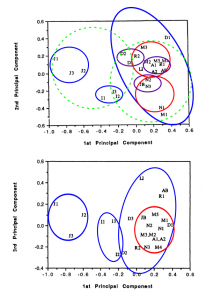 One “prophetic voice”, or multiple authors? Looks like many to me. 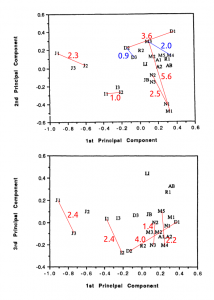 Put some normalized numbers of the variability, and it looks like 4-10 authors for Mormon scripture.

What Holmes Didn’t Do

Holmes could have easily predicted a number of expected authors based on the methods he used, like this author did before him: 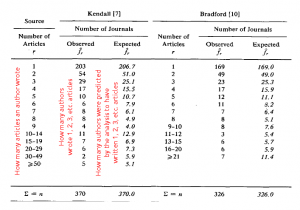 Here’s what the table would have looked like if Holmes had done all his work:

Next time, finish the work. And that’s poor peer reviewing.

Joseph Smith and the Prophetic Voice 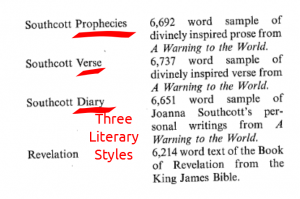 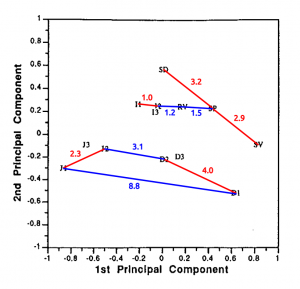 Joseph produced double the variability in the first two components, not including the third and fourth that Holmes showed were significant for the Book of Mormon (but ignored for Southcott). 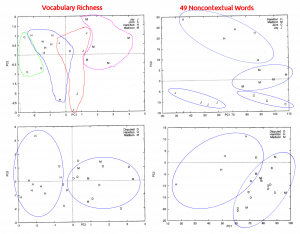 Holmes switched to non-contextual words, later. They are more discriminating. Kind of funny that non-contextual words were the measure used by Larsen et al. and by Hilton and coworkers in the studies of Book of Mormon stylometry that Holmes claimed his results disproved. We’ll take his apology as implicit.

Sometimes fraud or imitation fools stylometry, sometimes it doesn’t. Here’s a summary of factors involved in fooling stylometry and how they apply to Book of Mormon studies:

Nearly every consideration mentioned in studies on stylometric fraud disfavors the presence of fraud in Book of Mormon styles.

Some LDS researchers went looking for authors who created multiple styles when examined by strong stylometric measures (non-contextual word pairs). They did find one—Faulkner. They also found two more who were explicitly trying, but failed—Mark Twain and Robert Heinlein. 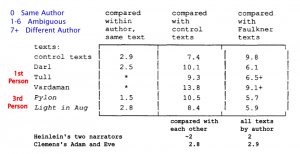 And Faulkner did it by making conscious contextual word pairs that are typically subconscious and non-contextual. He was imitating dialects, and he apparently had a really good ear for it. Add this to the studies on fraudulent stylometry, and it’s getting really hard to argue that Joseph made all the styles himself.

Joseph did a lot of dictations. How did that affect his personal style?

The following is an excerpt from the first table in a 2013 study by Jockers. It shows the number of the 96 texts dictated by Joseph with the author identified by stylometry that had a style most similar, or second most similar, to the text:

So Rigdon and Spalding yielded a total of 19.8 % false positives. 81.2 % of the passages were objectively misattributed. Whatever this method is, however good it is elsewhere, it’s hopeless for answering questions about Joseph’s dictation—which includes all of Mormon scripture.

If it’s even worth doing, here’s one way to explain how closed-set stylometry could so badly misattribute Joseph’s writings to others: 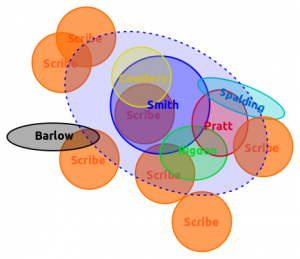 All it would take is Joseph’s style being more diffuse than those of the scribes, and their having some overlap in style. Then Joseph’s style would be attributed first to the scribe with a more focused style, and only later to Joseph. And if scribes were imperfect, not catching every word exactly as it was spoken? That could diffuse Joseph’s style even further without implying that Joseph had no personal style.

Closed-set Stylometry and the Book of Mormon

Here’s one of those charts, again, that had 80% errors on the last problem it was applied to. This from a 2008 paper by Jockers et al.:

Of the text that isn’t quotes from Isaiah or Malachi:

So 18.7% of the text is objectively (by any measure) false positives.

From the 2013 study we saw that Rigdon and Spalding showed up as false positives 19.8% of the time. In addition, Cowdery showed up most often when he wasn’t even scribe for the texts—31.3% of the total texts. We also saw that the NSC method got it “right” only 15.6% of the time. Something broke between the control tests and application to Joseph Smith’s dictations.

A closed-set method will always give a positive answer. Here’s a simplified visual representation of what this closed-set study has definitively shown us: 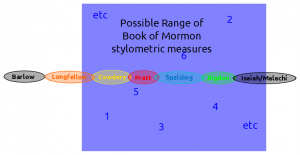 Chapter 1 would be assigned to Cowdery, chapter 5 to Pratt, 6 to Spalding, etc., despite none of the chapters matching the styles of the candidate authors.

The Book of Mormon Still Has Many Authors

The closed-set method may be poorly applied, but it did assign chapters of the Book of Mormon to 5 different authors. 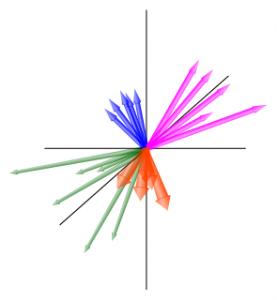 Stylometry is a multidimensional statistical problem. You observe all the features in multiple dimensions and look for clustering. Arrows represent the stylometric features vectors of four hypothetical authors. If the arrows are for different authors make different clusters, then you can tell them apart with your set of stylometric measurements.

The same thing can be done in classifying tumor cells. 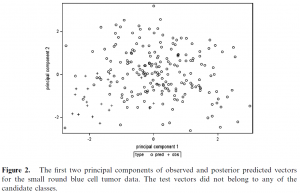 Test a fourth tumor type against three known tumor types in a closed-set problem, and the results tell you it is one of the first three types. Modify the method to be open-set, and the fourth type (+’s) clusters in one corner, while types 1-3 cluster in the middle. You can tell there is a new type.

The open-set method does much better, telling us there is an unknown author (Hamilton): 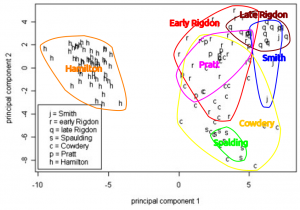 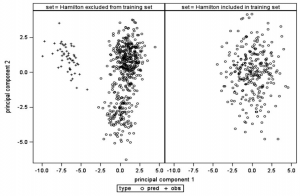 Closed-set methods are a bad idea if there might be an unknown author. 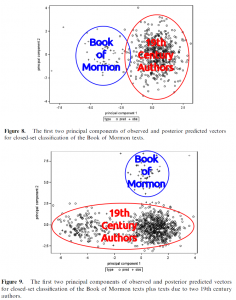 The closed-set study had plenty of evidence present in its own results to show that it was misapplied. Only the chapters with values above the line at 1.9 (figure below) could be confidently attributed by the closed-set method, and almost all of those were the Isaiah and Malachi quotes. 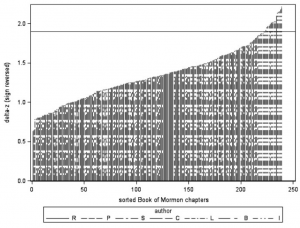 Again, the open-set method does better. And you will notice that Book of Mormon styles are all over the map compared with 19th century styles. 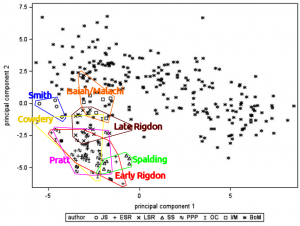 Nephi is not Alma is not Joseph 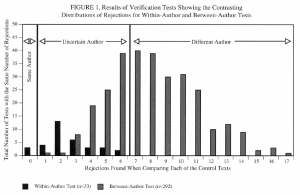 Using frequencies of non-contextual word pairs, the same author uses word pairs with almost the exact same frequency over different texts (0-6 rejections, or statistically significant differences in frequencies). Different authors often have 7 or more differences. When avoiding changes in genre, which can confuse stylometry, comparisons can be made between Joseph, Nephi, and Alma. Nephi matches his own style, as does Alma. 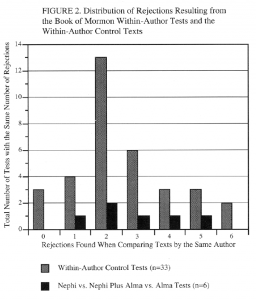 When you compare Nephi and Alma with each other they are different: 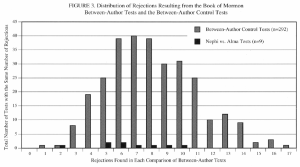 They are also different from Joseph, Oliver, and Solomon Spalding: 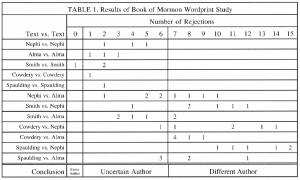 Once again, multiple authors in the Book of Mormon. 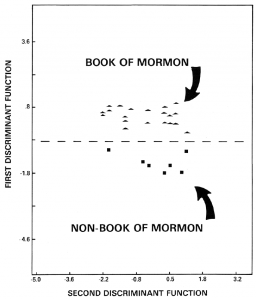 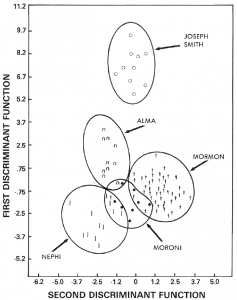 The Late War, The Book of Mormon, and Rare n-grams

Stylometric comparisons with The Late War uncovered the presence of many many short phrases in the Book of Mormon that are nearly unique to early 19th century pseudo-biblical writings. The Book of Mormon is written in Pseudo-Biblical, 19th century language. That’s terribly unsurprising, but truly interesting. As for the rest of the comparisons, keep in mind these observations if you choose to sift through them:

The Urantia Book and the Book of Mormon

The Urantia book is another purportedly multi-authored, revealed text. Some stylometric measures seemingly confirm multiple authorship, however, the differences are plausibly explained by shifts in genre and the passage of time—two criteria that cannot explain shifts in Book of Mormon styles. 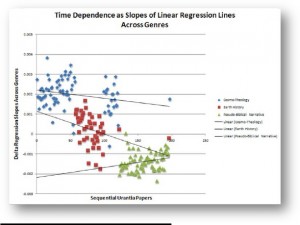 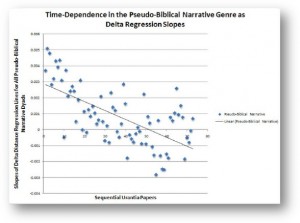 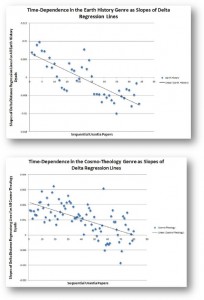 One author didn’t write the Book of Mormon. Two didn’t, either. And we don’t have anything else written by the people who did. For me, this is fact. Explain it how you will.