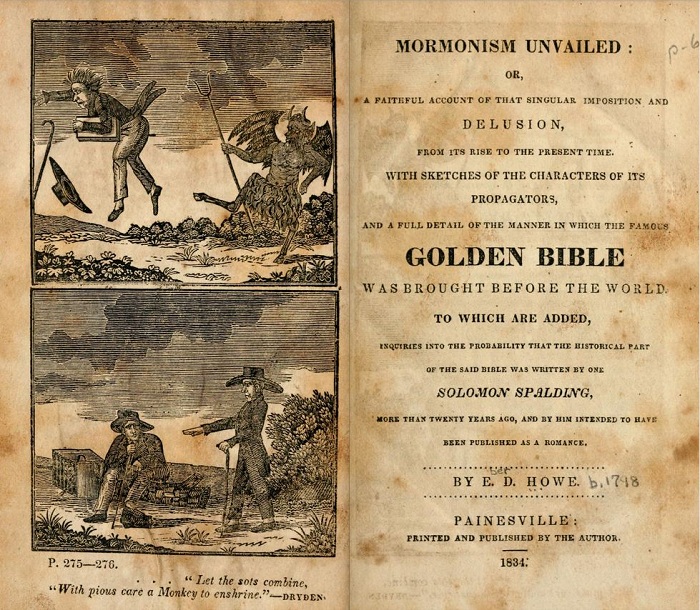 Thousands of people have responded to the Book of Mormon (BM) in print, and many thousands more in speech. There were several non-Mormon authors who commented on the book and its use of the King James Bible (KJV) immediately after it was published, and their statements are often left ignored for the simple fact that they wrote antagonistic literature. I think that at least one of the two authors that I will briefly discuss deserve more attention that he is usually given, but it is also important to note the first.

Alexander Campbell was the first to be acquainted with the contents of the BM and to respond at length to it in print.[1] Campbell was an important figure in the wider Restoration movement of the first half of the 19th century, and was the founder of the Disciples of Christ. He has been labeled “one of the country’s most notable theologians and preachers,”[2] and his comments on the BM have often been quoted in secondary scholarly literature. Sidney Rigdon, an important figure in the development of early Mormonism, was originally a part of Campbell’s movement, leaving that church as a convert to Mormonism.[4]

Many of Campbell’s remarks were centered on comparing Joseph Smith to other “impostors and delusions”[5] throughout history and on summarizing the narrative of the BM. He only made a single comment on the use of the KJV in the BM. Arguing that he found many “Smithisms” throughout the BM, Campbell stated that “It is patched up and cemented with ‘And it came to pass’–‘I sayeth unto you’–‘Ye saith unto him’–and all the King James’ haths, dids and doths–in the lowest imitation of the common version…”[6] He also went on to argue that the BM “has not one good sentence in it, save the profanation of those sentences quoted from the Oracles of the living God,”[7] meaning the direct quotations from the KJV.

Eber D. Howe, founder, editor, and publisher of the Painesville Telegraph from 1822 to 1835,[9] said at the beginning of his study Mormonism Unvailed that he undertook the book reluctantly,[10] but was convinced by friends to write and publish it anyway. His work has to turned out to be one of the most influential early works on Mormonism.

In discussing the use of King James English in the BM, Howe stated that “The whole work is written in a miserable attempt to imitate the style of king James the first…”[11] Statements such as this one show the strong bias that Howe had against the BM, but this should not distract from the comparatively sophisticated approach Howe takes through much of the book when discussing the use of the KJV in the BM. He notes that theologically he was not aware that the style of the KJV was better for revealing words from Heaven than that of the present day English he and Joseph Smith shared.[12]

He points out that in certain places where it would seem that the BM is quoting the OT it is actually quoting the NT. For example, he discusses 1 Ne. 10, where Nephi presents Lehi’s vision of John the Baptist in words that are seemingly dependent on Isa. 40. As Howe points out, it is “not so much on account of the prophecy as the language, in which he uses to express it,”[13] because upon closer review it is apparent that Lehi’s prophecy is actually dependent on Matthew’s and John’s gospels in the NT. When Nephi quotes Lehi’s prophecy in 1 Ne. 10:8, the use of the phrase “he should go forth and cry in the wilderness, Prepare ye the way of the Lord, and make his paths straight,” is exactly the same (excluding the second “and”) as it is found in Matt., Mark, and Luke. The use of the phrase “and he is mightier than I” in the next line confirms that it is, as Howe argued, Matt. that the BM is here dependent upon. For the phrase “there standeth one among you whom ye know not…whose shoe’s latchet I am not worthy to unloose” we must turn to John 1:26-27. Howe was ahead of his time in pointing out the use of the KJV in the BM where it was not pointed out in the text itself, especially considering the fact that he simply found these in reading the BM. Today it not only takes having a good methodology to locate these kinds of intertexts, but it also requires at the very least a concordance or a word searchable computer program.

Although writing in a polemical style against the BM and Mormonism, Howe was able to show early on that there were numerous places in the BM that were dependent on the KJV in a convincing way. It was definitely easier for Howe to recognize the dependence due to his polemic, but that should not stop potential readers from actually picking up and reading his book. Many studies have attempted to argue some of the most obvious places of dependence of the BM on the Bible away. Howe should at the very least be commended for his thorough research. There were many more places in his treatment that dealt with this topic, but the above is a good example of the accuracy of his work on the KJV in the BM.[14]

Signature Books has recently published a very nice reprint edition of Mormonism Unvailed edited by Dan Vogel. You can go here or here to find further information on the new printing.

[1] His later pamphlet entitled Delusions: An Analysis of the Book of Mormon; with an Examination of its Internal and External Evidences, and a Refutation of its Pretences to Divine Authority, was originally published as “Delusions,” ­The Millennial Harbinger Vol. II, No. 2 (Monday, February 7th, 1831), 85-96. It was republished as

[5] Campbell, Delusions: An Analysis of the Book of Mormon; with an Examination of its Internal and External Evidences, and a Refutation of its Pretences to Divine Authority (Boston: Benjamin H. Greene, 1832), 5.

[9] Eber D. Howe, Autobiography and Recollections of a Pioneer Printer: Together with Sketches of the War of 1812 on the Niagara Frontier (Painesville, OH: Telegraph Steam Printing House, 1878), 26-27.

[10] Eber D. Howe, Mormonism Unvailed: Or, A Faithful Account of that Singular Imposition and Delusion, from its Rise to the Present Time. With Sketches of the Characters of its Propagators, and a Full Detail of the Manner in which the Famous Golden Bible was Brought Before the World. To which are added, Inquiries into the Probability that the Historical Part of the Said Bible was Written by One Solomon Spaulding, More than Twenty Years Ago, and by him Intended to have Been Published as a Romance (Painesville: Printed and Published by the Author, 1834), “Advertisement” at the beginning of the book.