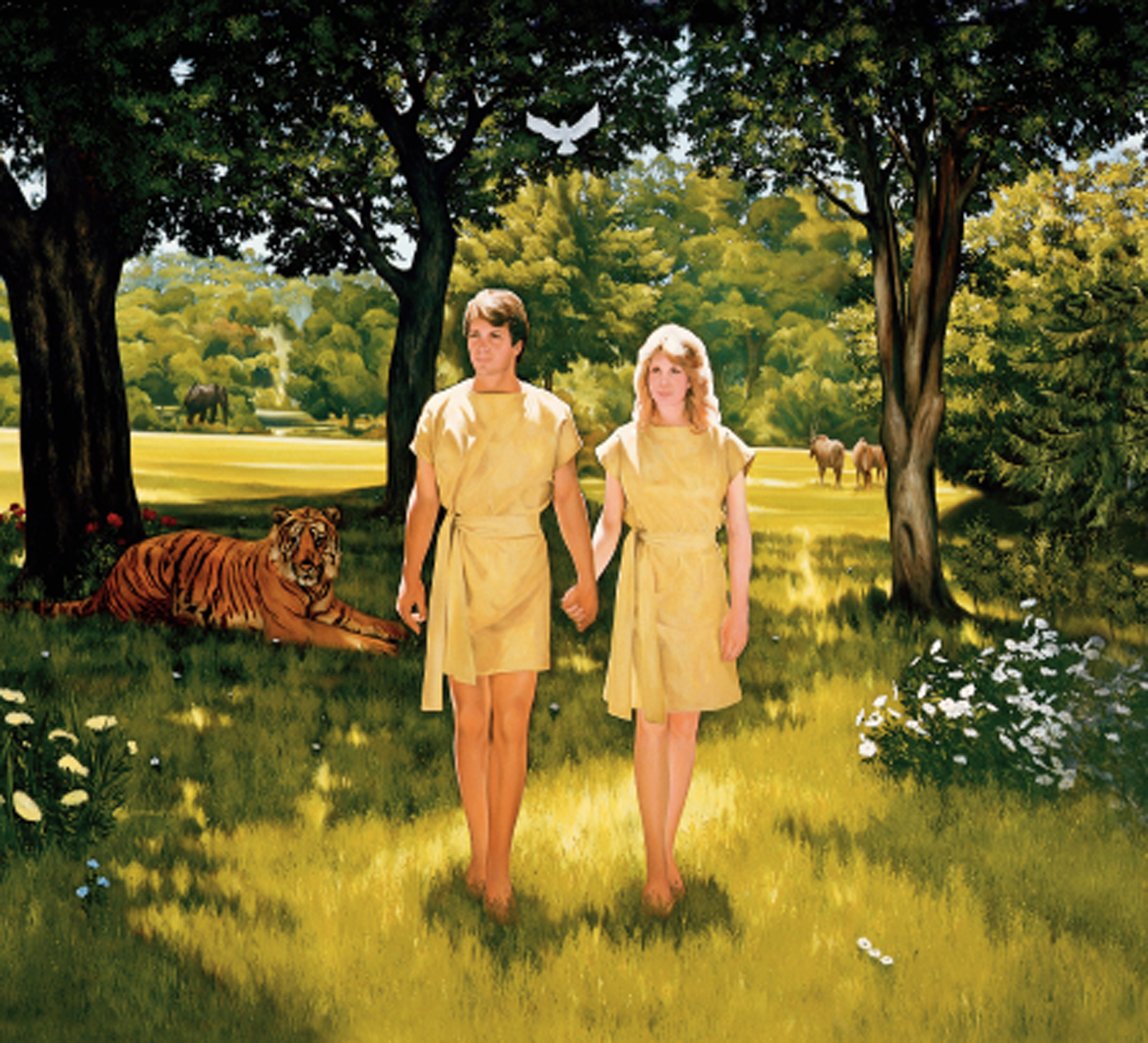 Last General Conference, Elder Jeffery R. Holland stated, “there was an actual Adam and Eve who fell from an actual Eden, with all the consequences that fall carried with it.” And he continued, “I do not know the details of what happened on this planet before that, but I do know these two were created under the divine hand of God, that for a time they lived alone in a paradisiacal setting where there was neither human death nor future family.” As I listened to this these statements I had mixed feelings, and I would like to examine these statements in the light of current scientific thinking on the issue of human evolution.

I was quite encouraged with the recognition that Mormon theology lacks knowledge of the details about what happened prior to Adam and Eve. It was refreshing to hear an apostle state that he does “not know the details” about creation and hominid evolution. I would argue that Elder Holland’s position is in line with the Church’s most authoritative statements on the subject of evolution, even though these may be less known for the majority of church members. The BYU Evolution Packet, perhaps the most authoritative document on the subject, leads one to also conclude that the best summary of the Church’s current position of evolution, is that there is no official position; the Church is neutral as to how the diversity of life was created on this planet, including the origin of the physical body of Homo sapiens.

Latter-day-saints, in general, believe that Adam and Eve, “were created under the divine hand of God, ” although the specifics of how (the exact methods) God might have brought about Adam and Eve are not understood. In 1910, the First Presidency delivered instructions to priesthood quorums (not the general membership and thus was not considered “official” enough to be included in the BYU Evolution packet) essentially outlining three acceptable possibilities for the origin of the physical body: 1) “the mortal bodies of man evolved in natural processes to present perfection, through the direction and power of God”, 2) they “were transplanted from another sphere”, or 3) “they were born here in mortality.” Significantly, the literal scriptural interpretation of man being formed from the ground and the women from a rib do not seem to be represented in the three possible scenarios suggested by the first presidency. The scientific evidence seems to align almost entirely with the first option. Thus, given that the Lord has not revealed the specifics of creation (D&C 101:32-34), we are encouraged to “seek… out of the best books” (D&C 88:118), which one can interpret infers that we are to learn as much as we can from other forms of acquiring knowledge, including science. And there is an immense amount of knowledge and evidence supporting the idea that the physical bodies of Homo sapiens came about via the process of evolution.

Elder Holland then asserts that “[Adam and Eve] lived alone in a paradisiacal setting where there was neither human death nor future family.”This statement perhaps, at least on the surface, seems to be the most problematic to reconcile with scientific evidence. However, we should remind ourselves that the role of the Garden of Eden in the creation account is also not clear. We have no idea how long they lived before being “placed” there. We also do not know how long they lived in the Garden of Eden before entering the “lone and dreary world” or what were the exact boundaries or conditions of the garden before and after the fall. Furthermore, I find it interesting that the three new temple movies (and previous versions) of the endowment, while using the exact same script, exhibit very different points of emphasis, meaning, interpretation, feeling, etc. This is significant because it demonstrates that diversity of interpretation is welcome in the Church and that we don’t know exactly what happened.

Our understanding of “death before the fall” is not complete and many different positions have been proposed throughout the years (see here). The current Gospel Principles manual states that, “There was no death” in the Garden, and yet Holland adds the clarification “human death” in his talk. This statement seems to contradict the previously held idea of no deaths any kind of life before the fall. The ample amount of fossil evidence clearly has demonstrated that death and extinction have been occurring for billions of years. Still, the conclusion that there was no human death before Adam and Eve is extremely problematic, given our current understanding of hominid evolution (see links for great website examples Smithsonian Institute, Berkeley, Natural History Museum, and Becoming Human).

I find it helpful to remember that knowledge and acceptance of fossils, extinction, and evolution does not decrease the value of faith and belief in a supreme being. In fact, there is good evidence that increased knowledge of evolution can help reduce one’s perception of conflict between science and religion (Ogden, 2015). Moreover, it does not help the cause of truth to defend unsupported ideas with bad arguments. Saying that fossils are not real or that evolution is invalid are bad arguments in light of current scientific theory. Dr. Henry Eyring wrote: “There are few ways in which good people do more harm to those who take them seriously than to defend the gospel with arguments that won’t hold water. Many of the difficulties encountered by young people going to college would be avoided if parents and teachers were more careful to distinguish between what they know to be true and what they think may be true.”

Reconciling the idea of Elder Holland of “no human death”and the idea highlighted in the BYU Evolution packet and the scriptures that Adam was “the first man of all men” (Moses 1:34) to the notion that other humans were living before and/or contemporary to Adam and Eve is possible. This hypothesis of reconciliation includes a redefining of  “human” or “man” as having three characteristics: 1) inhabits a Homo sapiens physical body; 2) possesses a spirit body inside of the physical body that is a spiritual offspring of Heavenly Mother and Heavenly Father; and 3) was taught the gospel and made covenants with God. In this scenario, Adam and Eve represent the first time the Lord made covenants with spiritual offspring inside Homo sapiens bodies; “If thou wilt turn unto me, and hearken unto my voice, and believe, and repent of all thy transgressions, and be baptized, even in water, in the name of mine Only Begotten Son, who is full of grace and truth, which is Jesus Christ, the only name which shall be given under heaven, whereby salvation shall come unto the children of men, ye shall receive the gift of the Holy Ghost, asking all things in his name, and whatsoever ye shall ask, it shall be given you” (Moses 6:52). With this definition of “human” or “man”,  Adam and Eve could have lived at any time during the last 200 thousand years of Homo sapiens evolutionary history; the important thing is that they were the first Homo sapiens, as spiritual offspring of God, to learn the gospel and make covenants with God. The timing of Adam and Eve’s existence is not nearly as important as the fact that they began a covenant-making process (exemplified in the current temple ceremony) that will eventually enable spiritual offspring of God, independent of when they occupied their physical bodies, to be exalted, through adoption into their family (akin to adoption in the family of Moses, Aaron, and Abraham; D&C 84:34, Romans 9:4) through the priesthood. Why is it not possible that vicarious work can be performed for all Homo sapiens housing spiritual offspring of God, just as vicarious work for the dead can be performed for those living during the Apostasy or other times. This idea may be completely wrong, but at least this option allows for the evidence we find in science, particularly concerning human evolution, to reconcile with the essential doctrines of Adam and Eve as proclaimed by Elder Holland and with the Church’s position.

Perhaps, there are other scenarios that could allow reconciliation that include more scripturally literal interpretations on the one extreme and, on the other extreme, more symbolic interpretations, including the notion that Adam and Eve were not necessarily real people and that elements of the creation story come from other cultures and beliefs. The latter interpretation seems to be in direct conflict with Elder Holland’s statement that, “there was an actual Adam and Eve who fell from an actual Eden.” In any case, I still argue that covenant making and covenant keeping is at the heart of the issue, and maybe we should not be so concerned with the particulars of literal interpretations of the Adam and Eve account. After reading his talk over again, I realized that it was a shame that I originally let the statements about Adam and Eve cause me some anxiety, because the remaining parts of his talk were absolutely beautiful.

Dr. Ogden is a Professor of Biology at Utah Valley University. His basic research interests are in evolutionary biology, science education, bioinformatics, systematics, phylogenetics, comparative genomics, and entomology. He is married to Dr. Lida Jimena Ogden. She is a family Medicine Physician at the BYU Health Center. They have four children and enjoy spending time with my family, traveling, hiking, singing, watching Broadway shows, art (closet water color painter), digital scrapbooking, and playing and watching sports. Dr. Ogden served a full time mission to Chile, Concepcion and is currently serve as the first counselor in the bishopric of his ward.

All posts by Heath Ogden