A Response to John Dominic Crossan, ‘How to Read the Bible and Still be a Christian’ 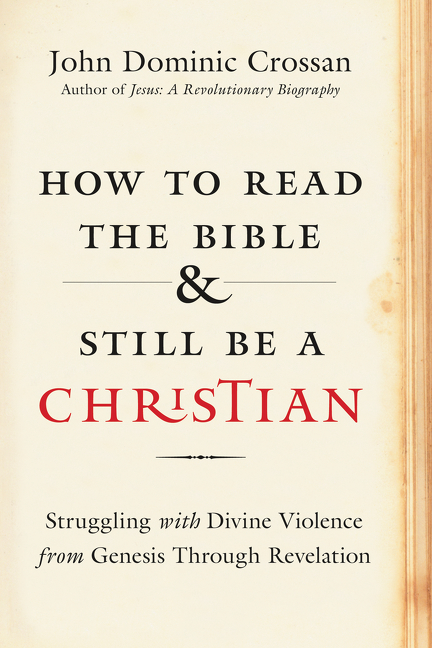 I was invited to respond to John Dominic Crossan a few weeks ago at a book event at Writ & Vision in Provo, Utah. I was honored to spend the time getting to know Dom, and greatly respect his honesty, scholarship, and kindness in allowing me to share a few of my thoughts with him and the audience about his book. The following were my remarks that night in response to his book.

The first session that I attended at the annual meeting of the Society of Biblical Literature was titled “Use, Misuse, and Impact of the Bible,” and its theme was “Biblical Genocide in Biblical Scholarship.” The session experienced a lively debate, especially between two of the four panelists, Eric Seibert and Hector Avalos on the topic of the conquest of Canaan by the Israelites. Dr. Seibert is a Professor of Old Testament at Messiah College and identifies as a believing Evangelical Christian. Dr. Avalos is a Professor of Religious Studies at Iowa State University and is no longer an Evangelical Christian, and identifies as an atheist. Seibert wanted to make clear that the genocide of the Canaanites and the conquest of Israel/Palestine in the Book of Joshua were morally reprehensible events, and something that the God of the Bible would not have commanded. Avalos agreed that this was not something a god would command, but for very different reasons. While Seibert walks the line of calling into question the authority of the Bible and being a traditional believing Christian, Avalos concluded that god does not exist and that we should discard texts that teach divine violence like the Book of Joshua.

Although I use the example of these two scholars I do not mean to portray that there are only two paths in approaching how to understand divine violence in the Bible, or that either of those two paths is a better one over the other. John Dominic Crossan’s new book is an example of creating a different path, that I think works well in the middle of the two perspectives seen in Seibert and Avalos. Crossan argues that God is not a violent god, but reveals non-violence, which is then turned into violence by civilization. In doing so he points out the necessity of recognizing (and even learning) the problematic nature of violent texts in the Hebrew Bible, while still maintaining their importance within the Bible for understanding the growth of the Judeo-Christian tradition.

In the book Crossan continuously argues that God asserts a radical non-violent “distributive justice” and that humans later subvert that with the normalcy of civilization’s violent retributive justice.[1] He does this through a series of chapters that examine several sections of the Bible that he sees as representative of differing traditions. These include the Priestly, Wisdom, Deuteronomic, Prophetic, Psalmic, and Kingdom traditions, and span, quite literally as the subtitle suggests, from Genesis to Revelation. The book is aimed at taking both the Christian faith and modern academic scholarship seriously, placing them on equal footing.

Some may want to debate whether or not that is accomplished, but that is not what I will be discussing tonight. I agreed with the main thrust and conclusions of Crossan’s book, and appreciated the perspective that Dr. Crossan provides throughout the study. I think it is healthy to ask questions, as he invites us to do, after realizing (for example) that in Matt. 5:21-22 Jesus forbids “anger, insult, and name-calling” and demands “‘Love your enemies and pray for those who persecute you’ (5:44),”[2] but then later in the same gospel Jesus is quoted by the author as calling the Pharisees hypocrites, blind guides, blind fools, snakes, vipers, and going to hell. As Crossan asks, “Did Jesus change his mind, or did Matthew change his Jesus?”[3] I think it is a healthy experience to realize that the Christian Bible is not a monolithic unity, and that there are varying perspectives within the collection, sometimes in a single book, on who God is in both the Hebrew Bible and the New Testament. In that respect, I welcome this new book and invite many to read it. It is a worthwhile contribution to this area of study, and I think many Christians will really enjoy the experience as they read and are challenged by Crossan’s assertions.

With that in mind, I would like to make a few short comments on areas that, although they seem small, I think are important enough to make a few remarks. I will keep my comments strictly to the chapters that discuss the ancient Near Eastern world of the Hebrew Bible, mainly because this is the area that I have spent my academic study. This will deal mostly with the influence of other ancient Near Eastern texts on the Hebrew Bible.

After discussing the Hittite treaty formula a few pages before, Crossan states that “I agree completely with the last half century’s consensus of scholarship that the Hittite-style suzerain-treaty was the metaphor, model, and matrix for the divine covenant in the biblical tradition.”[4] When Dr. Crossan uses the term “matrix” throughout the rest of his book he means, “the background you cannot skip, the context you cannot avoid.”[5] If I understand him correctly, then I think I will have to differ with him on the idea that there is a consensus that the Hittite-treaty formula, per se, was the major background for texts in the Hebrew Bible like the Covenant Code (Ex. 20:19-23:33), Josh. 24, and Deuteronomy. On the contrary, some scholars have advised against this view.

To share a couple of examples, David P. Wright recently wrote a book looking at the use of the Code of Hammurabi in writing the Covenant Code. In his book he cautions against making connections between early Hittite treaties and biblical texts because “The similarity of CC’s laws to the HtL may be explained by the influence of Mesopotamia on Hittite law.”[6] The parallel might not be coming from Hittite treaties directly. Rather, both traditions may have been influenced by Mesopotamian law formulae like the Code of Hammurabi. This is something similar to T. L. Donaldson’s “Weak Genealogical Parallel” when discussing intertextual connections.[7]

As Billie Jean Collins has pointed out in her essay “Hittitology and Biblical Interpretation” for the Oxford Encyclopedia of Biblical Interpretation, “The geographical, chronological, and cultural remoteness of the Hittites from Israel have been taken as insurmountable barriers to any direct influence between the Hittites and Israelites.”[8] For the Covenant Code it would be wrong to choose the Hittite-treaty as the “matrix” of this literature. It is more correct to state that earlier Mesopotamian law influenced both traditions, the Hittite and the Israelite, especially if one accepts Wright’s argument that the author(s) of the Covenant Code directly used the Code of Hamurrabi. One point that needs to be kept in mind is the fact that the Code of Hammurabi continued to be copied in Mesopotamia during the Neo-Assyrian period, when Mesopotamia, as Wright states, “exerted strong and relatively continuous political control and cultural sway over the kingdoms of Israel and Judah, and at a time when the Laws of Hammurabi were actively copied in Mesopotamia as a literary-canonical text.”[9]

In 1971 Moshe Weinfeld argued against G. E. Mendenhall’s thesis that the Deuteronomic covenant was dependent on Hittite Law. He said,

Although all the elements of the Deuteronomic covenant are found in the Hittite treaty, one element at least points to the later neo-Assyrian and Aramean treaty pattern. The Hittite treaty has very short and generalized curse formulae, while Deuteronomy like the Assyrian treaties and the Sefire steles contains a series of elaborate curses.[10]

To be fair, Crossan does later discuss the influence of neo-Assyrian treaties on Deuteronomy. He makes a similar argument as Weinfeld when he states that “the Deuteronomic tradition’s vision of…covenant…was modeled on contemporary Assyrian-style treaties and thereby greatly enlarged the role of Sanction within the covenant and curses and punishments within Sanction.”[11] But, this is where Crossan could have stated that he agreed with the academic consensus because there is one. Weinfeld, McCarthy, Hillers, Frankena, Steymans, Otto, and more recently Crouch, among many others, have all emphasized this influence.[12] There are very few, if any, scholars today who would argue against the influence of neo-Assyrian treaties, with the best exemplar being the Vassal Treaties of Esarhaddon, on Deuteronomy. The reason I find it necessary to discuss Deuteronomy and neo-Assyrian treaties is that Crossan includes several chapters of Deuteronomy in the section where he claims that the Hittite treaties were the “matrix” of the these texts. Again, some may find these points tedious and maybe even irrelevant for his overall argument, but as many have said before me, the devil is in the details.

To conclude, I would like to return to my first Society of Biblical Literature session with you. I found myself in a room with several scholars deliberating and debating several aspects of the conquest narrative and genocide of the Canaanites in the Deuteronomist History (Joshua-2 Kings, excluding Ruth). This is a troubling text because it is not simply about a political force moving in to gain or even retake supposed ancestral land. Instead, this narrative is a religio-political account where the God of Israel actually commands Joshua and the Israelites to kill all men, women, children, and animals.[13]

In my own personal experience discussing faith with Christians, both in the Mormon tradition and out of it, I have found that many Christians struggle with the Conquest narrative. It shouldn’t come as a surprise, then, that I was disappointed that Crossan leaves the conquest of Canaan entirely out of his book. He moves from the early chapters of Genesis to Deuteronomy, then straight to Isaiah. I would have expected a book grappling with divine violence in the Christian Bible to include this central text on this important topic. Thank you.

[7] See Christopher Beetham, Echoes of Scripture in the Letter of Paul to the Colossians (Leiden: Brill, 2008), 26.

[12] For examples of these writings see Weinfeld, 59; and C. L. Crouch, Israel & the Assyrians: Deuteronomy, the Succession Treaty of Esarhaddon, & the Nature of Subversion (Ancient Near Eastern Monographs, Num. 8; Atlanta: SBL Press, 2014), 49-50.