95: When Race, Religion, and Sport Collide – Black Athletes at BYU and Beyond 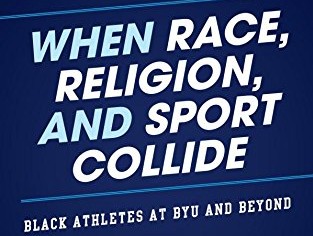 While reading Darron Smith’s excellent work on race and sport two concepts kept coming to my mind as some of the most nefarious ideas to espouse. Though they may not seem so bad at first glance the reality is that (in my mind) bootstrapping and libertarian free will are destructive to society. Both ideas produce hallucination in individual people. In this visionary state they all that they have accomplished a mere product of their own will, and not only that but inherent in themselves (and presumably every other human being) is the transcendent ability to make choices that are immune to outside influence. Why are these notions so pernicious you may ask? They are pernicious because they deny reality.

The ‘do it all by myself’ mentality rejects that we human beings are actually social animals and function in social groups to achieve greatness. It rejects the fact that most jobs are obtained via networking, its who you know more than what you know. Nobody gets to a solid career or stable station in life by mailing off a list of credentials on a resume or warmth in an interview, the people all around us help us get almost everything we have. For those who have been given much these two ideas provide a free massage to our ego and not only that but a logic supporting the derision of those who have been given less. For if we really are uncaused causers and truly can pull ourselves up by our bootstraps (an absurd idea if you actually think about it) than those who have not succeeded in life must at the very least have a character flaw and at worst not be a real human. Everybody wants to succeed right? So if the reason a person hasn’t is merely that they haven’t put their shoulder to the wheel, or simply haven’t wanted it then they deserve what they have and there is not a good reason to put a hand out because ‘I worked for what I have and they can earn their own just like I did.’ Or in religiously justified cases of race as a class marker, it is because of their ‘proper’ station in life

We need to recognize the shoulders we are standing on and the privilege that we may have undeserved access to. We also need to recognize that trial, suffering, and hardship are not earned or deserved either, and perhaps when we start recognizing those facts of life we’ll be able to start functioning as a real equality based society rather than continuing oppression in our delusion of equity and colorblindness.

By the title of the book, and this blog post, you know that I’m talking about race: an identity construction tool that has been destroying lives for as long as I know. In a world dominated by white males (like myself), we white males need to recognize that a huge part our ‘success’ has been handed to us because our racial and power holding peers liked us, saw us as whole people, and believed that we had something important to contribute to the world. Sadly, the same can’t be said for women, people of color, and many other marginalized groups.

It was shocking to me, to have all the barriers that black student athletes have in their way so clearly described by Smith. Racism is a big problem, we’ve discussed it here before on the podcast, join me as I talk with Darron about the the experience of playing in high performance sport as a person of color.

Darron’s article at Deadspin: The Truth About Race, Religion, And The Honor Code At BYU

Jose vs. Joe: A case of resume racism

All Abraham’s Children: Changing Mormon Conceptions of Race and Lineage by Armand Mauss

Black and Mormon by Newell Bringhurst and Darron Smith

Standing on The Promises by Margaret Blair Young and Darius Aiden Gray (Vol. 1, Vol. 2, and Vol. 3)

Religion of a Different Color: Race and the Mormon Struggle for Whiteness by W. Paul Reeve

Why Are All the Black Kids Sitting Together in the Cafeteria: And Other Conversations About Race by Beverly Daniel Tatum