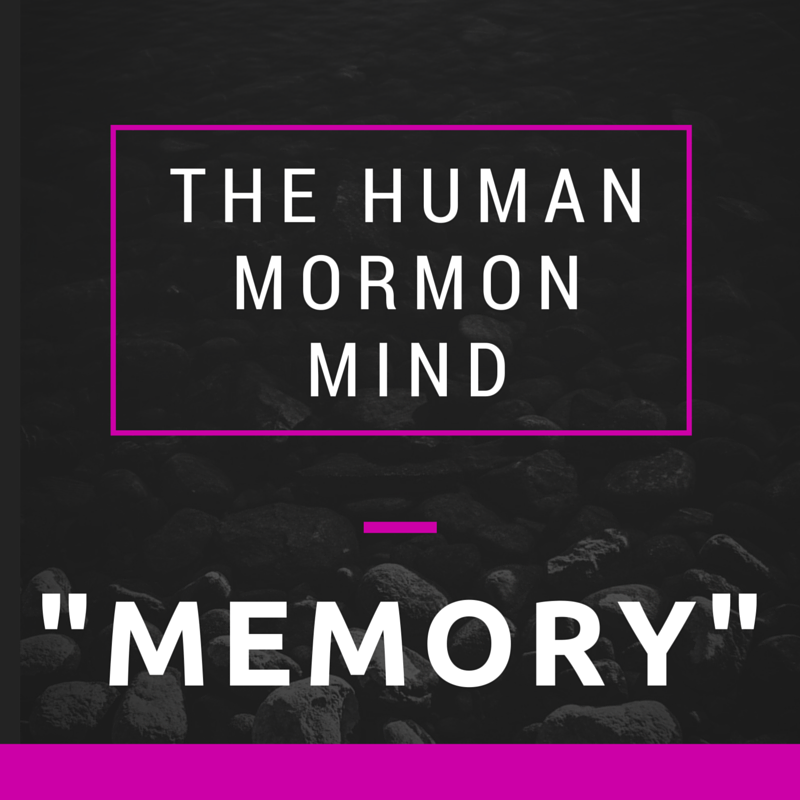 Little Brother: “Hey remember than time when we all jumped off the ski lift?”

Older Brother: “Dude you weren’t even there. In fact you were 5. I told you that story.”

Memory is a funny thing. We all know that it is fallible and that we forget stuff or misremember stuff all the time. Yet, when a memory is vivid it is deeply upsetting to find out that it is false or even flawed in some way. In this episode Mica, LaShawn, Thomas, and I discuss how memory is experienced, how memory is understood according to modern psychologists, and how this understanding of memory should inform our interpretation of history.

Please check out the RF-LCF fundraiser page and donate while you are there (and nab some sweet Mormon swag).

I spent much time playing guitar through my high school years, and like other guitar nuts I never learned to read music like those who went through piano lessons did. I learned new songs through guitar tablature found on the internet. I remember several times visualizing in my mind, what I thought was a memory of previously seeing a link to tablature for a song I wanted to learn on a website. When I went to look for the actual link my brain was telling me existed I could not find it. It simply wasn’t there. This kind of experience is not unique to only me. Similarly, a memory researcher “Dr. Neisser, came to the realization that his own memory was as fragile as [anyone else’s]. For years, he had said that he was listening to a baseball game on the radio when he heard about the attack on Pearl Harbor on Dec. 7, 1941. Finally, he said, it dawned on him that he could not have been listening to a baseball game in December.” They don’t play baseball in the winter. What he thought was a vivid memory was at least in part. . . fabricated. This fabrication went on unbeknownst to Neisser, or likely any other human being experiencing such a “false” memory.

Even more challenging than this is a deeply troubling story of Penny Ann Beernsten who was out running along the Lake Michigan shoreline and was apprehended by an unknown man who forced her into a wooded area and sexually assaulted her on July 29, 1985 while on vacation. She recalls making an effort to etch her assailant’s face in her mind and later when a lineup was produced she confidently picked out Steven Avery as the perpetrator, or who she thought was her attacker. Later, that is 17 years later, DNA testing advocated through the Innocence Project which first started in 1989, demonstrated that Steven Avery who had spent nearly two decades in prison wasn’t at the scene of the crime and did not commit that crime, it was a man named Gregory Allen.[1] How does this happen? How do we confidently recall facts, of traumatic events or seemingly trivial details yet be wrong, when we feel that we can only be right?

In 1977 Harvard researchers published an article about memory in the journal Cognition. In questioning individuals about the assassination of president John F Kennedy, surely an emotionally arousing event that rocked the nation, the term “flashbulb memories” was coined. The questionnaires revealed that “almost everyone can remember, with an almost perceptual clarity, where he was when he heard, what he was doing at the time, who told him, what was the immediate aftermath, how he felt about it, and also one or more totally idiosyncratic and often trivial” details of event. While the memories of the murder were indeed vivid the study was not designed to establish whether the memories were accurate. Later Ulrich Neisser came along as a cognitive psychology researcher. When the Challenger Space Shuttle disastrously exploded Neisser prepared a questionnaire for his freshman psychology students to fill out, including the details of their very new and disturbing memory of the shuttle explosion. They recorded where they were and how they learned of the event. Then 3 years later during their senior year they were tracked down again and asked to recall the memory. When the old and new questionnaires were compared the details were quite often, off. “One of them, who confidently remembered learning about the disaster from TV when an announcer broke in with the news, had in fact heard about it from fellow students in her Religion class. Another, who was quite sure he had been at home breakfasting with his family, had in fact been on campus. A woman student gave a dramatic account of a girl running through the dorm screaming `The space shuttle blew up’; in fact, she had heard about it from friends over lunch. Of course not everyone was mistaken to this extent; many reports were partially right and a few almost completely so. But the means score on [their] seven-point accuracy scale was only 2.95, and a quarter of the subjects were at zero. Nevertheless, almost all of them were very sure they were right.” Other researchers have conducted similar experiments following other emotionally arousing public events such as the O.J. Simpson trial and the 9/11 attacks.

In general, the findings show that over time, on average, the fidelity between reality and our memory of it reliably deteriorates. What authors, historians, and most people have known or assumed to be true is being fleshed out in detail through psychological scientific inquiry, and that is that, memories fade. In the famous biography of Joseph Smith “No Man Knows My History” Fawn Brodie wrote the following “a man’s memory is bound to be a distortion of his past in accordance with his present interests, and the most faithful autobiography is likely to mirror less what a man was than what he has become.”[2] Brodies assessment is true, we recreate our memories to cohere with our present state. Though I think it would be a mistake to conclude that the distortions of memories arise from a conscious choice to wipe the slate clean and fabricate a more favorable history of ourselves. In fact, the research I have cited here suggests the opposite. That is that when we recall false or flawed memories we think of them and understand them to be true recollections dug out of our gray matter hard drive. In reality we are reconstructing our memory constantly to fit into some narrative that makes sense of the world as we currently see it.

The field of memory research is fascinating and troubling. For example, recently experimenters have successfully implanted false memories of violent episodes into subjects brains, which the subjects accepted to be true accounts of their own lives, until they were debriefed later. It seems that in order to really have a memory that we can rely on we need to record our life and have the recordings available and ready for later examination. Rather than committing to tediously documenting our lives I think we just need to get used to the idea that our memories may very well be wrong and that to rely on them as depictions of reality is a mistake. Whether we like it or not, this, is the state of human memory.