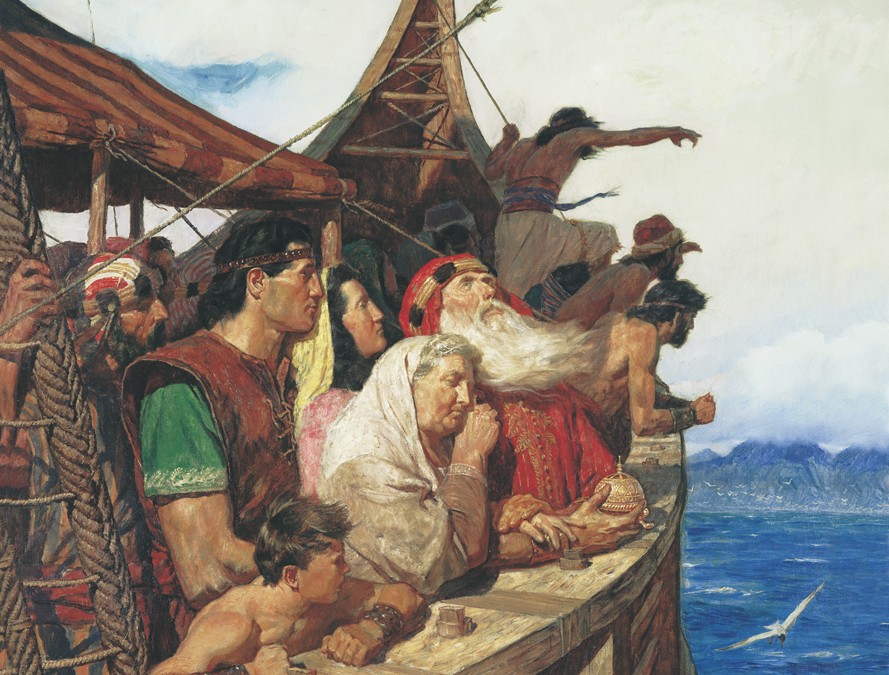 For what could I write more than my fathers have written? For have not they revealed the plan of salvation? I say unto you, Yea; and this sufficeth me. (Jarom 1:2)

Scripture, as we know, can be interpreted in a variety of different ways. Individuals, cultures, and religious traditions can and do read scripture literally, historically, theologically, metaphorically, culturally, etc. While the post-Enlightenment Western Christian world (especially conservative Protestantism) developed an affinity for literalism and historicity, it is important to keep in mind that this is a fairly recent development. For most of Christian history, it was taken as a given that Bible was to be read and interpreted metaphorically or theologically, certainly not literally (see here, here, and here, e.g.).

These past two months the LDS adult Sunday School curriculum has focused on 1 Nephi in the Book the Mormon. This chapter tells the familiar story of how Lehi and his family left Jerusalem, tarried in the wilderness, crossed the ocean, and arrived in the American continent (the “Promised Land”). While most Mormons read this narrative with a literal/historical frame of mind, what might be gained by looking at this narrative through a more metaphorical or theological lens?

Here’s one way that the “Nephi story”’ might be interpreted in a non-literal fashion: as a “type and a shadow” of the Josephine Plan of Salvation. After all, Mormons often argue that scriptural prophets are a “type of Christ.” What might the traditional Nephi story look like when we read Nephi as Jesus and then carry the analogy even further?

LAMAN AND LEMUEL: Those of us who “kick against the pricks.” Laman and Lemuel were also “born of goodly parents” but ultimately chose not to follow their brother Nephi.

SAM AND OTHER SIBLINGS: Those of us why try our best to follow Jesus. Sam and other siblings were faithful to Nephi and followed his lead.

JERUSALEM: The premortal existence. After all, ancient Hebrews believed that Yahweh dwelt in the temple in Jerusalem. Just as Lehi and his family left the city with the temple where God dwelt, so do we as spirits leave the premortal sphere were our Heavenly Parents dwell.

LIAHONA: The words of Christ / Holy Spirit. (This interpretation is explicitly given in the Book of Mormon.)

BOUNTIFUL: The spirit world. (A brief place of rest before the final leg of the journey.)

OCEAN: Sin and death. (Obstacles on the path to the Promised Land that we’re not able to overcome on our own.)

BOAT: The Atonement. (The vehicle that enables us to overcome the obstacle separating us from the Promised Land.)

THE STORM: The Passion of Christ, or potentially also a foreshadowing of the storm that would hit the New World at the time of Christ’s death according to the Book of Mormon.

With this in mind, what if we read Nephi story like this: Lehi and his family (all of us / the human family) leave the place where God dwelt (Jerusalem / preexistence) to travel in the wilderness (earth life / “lone and dreary world”) for a number of years. The Liahona (Holy Spirit) guides them in their journey. At the end of their journey, they reach a place where they are able to rest for a time (Bountiful / spirit world). They are unable to get across the ocean (sin and death) by their own efforts, though, so Nephi (Jesus) builds them a boat (works out the Atonement and Resurrection) to carry them over the ocean (overcome sin and death) to the Promised Land (Celestial Kingdom).

1 Nephi 18:11 And it came to pass that Laman and Lemuel did take me and bind me with cords, and they did treat me with much harshness; nevertheless, the Lord did suffer it that he might show forth his power, unto the fulfilling of his word which he had spoken concerning the wicked.

1 Nephi 18:15 And it came to pass that we were about to be swallowed up in the depths of the sea. And after we had been driven back upon the waters for the space of four days, my brethren began to see that the judgments of God were upon them, and that they must perish save that they should repent of their iniquities; wherefore, they came unto me, and loosed the bands which were upon my wrists, and behold they had swollen exceedingly; and also mine ankles were much swollen, and great was the soreness thereof.

Interesting that Nephi was “swollen exceedingly” after being bound by his brothers specifically at his wrists and ankles during the time they were on the boat overcoming the obstacle of the ocean… What analogy might we readily read into this?

2 Nephi 2:24 Rebel no more against your brother, whose views have been glorious, and who hath kept the commandments from the time that we left Jerusalem; and who hath been an instrument in the hands of God, in bringing us forth into the land of promise; for were it not for him, we must have perished with hunger in the wilderness; nevertheless, ye sought to take away his life; yea, and he hath suffered much sorrow because of you.

This is Lehi speaking to Laman and Lemuel. How might this passage be interpreted using the narrative framework outlined above?

Now, the skeptic/agnostic in me must candidly admit that this all may simply be a coincidence. Or that the similarity between the two narratives may be indicative of larger arch-typical structures underlying most epic narratives that gifted story-tellers (like Joseph Smith) have a keen ability to channel.

Or perhaps Joseph the Seer was tapping into something a little more profound as he dictated this portion of the text of the Book of Mormon.

Try pulling that out of your hat.[1]