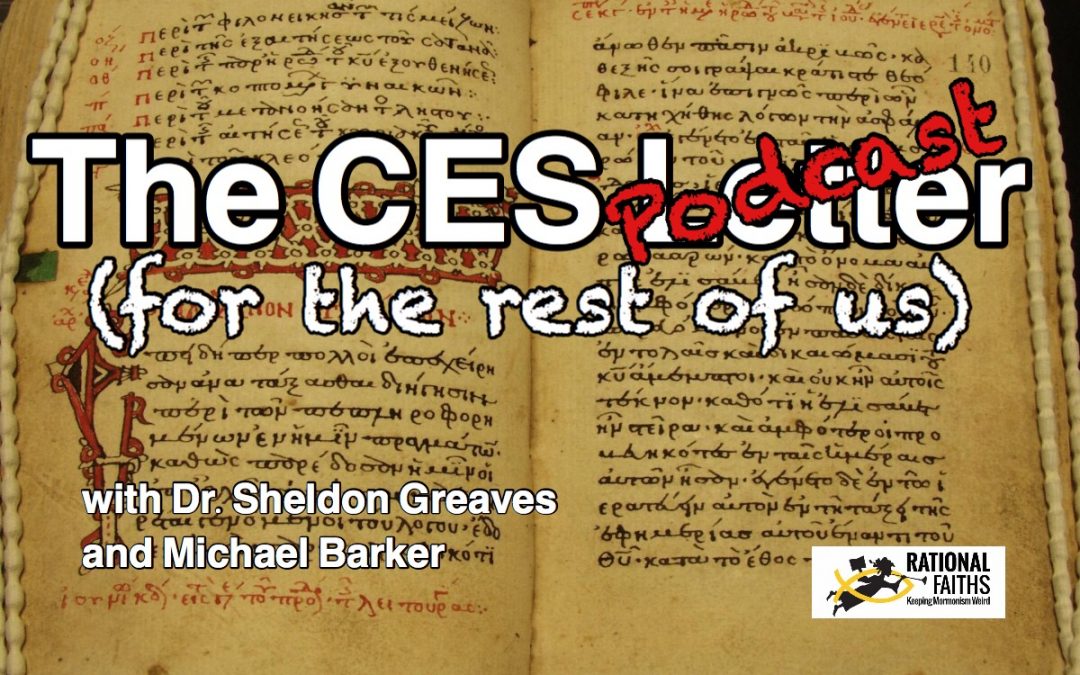 What’s with the young naked dude running off in the Garden of Gethsemane? Why  would Jesus preach so much regarding taking care of the poor yet be totally okay with an unnamed woman anointing him with super expensive perfume?  What did Jesus do to get the high priest and chief priests so dang angry? Was Pilate really as nice as the Gospels make him out to be? Why does Mark have two different endings? All these questions are discussed in this episode of The CES Podcast (for the rest of us).

Welcome to episode 9b of Rational Faiths’ newest podcat series, The CES Podcast (for the rest of us), with Bible scholar, Dr. Sheldon Greaves and his co-host, Michael Barker. Dr. Greaves and Mike Barker will be looking at this year’s seminary and institute curriculum, which covers the New Testament, and will be distilling a week’s worth of lessons and readings down to a half hour podcast. Episode 9b will cover Mark chapters 14-16.

Please leave us feedback and rate us on iTunes if you like what we are doing or if there is an area upon which we can improve.

CHAPTER 14
Plot to Kill Jesus
vs 1: It’s the chief priests (Sadducees) and the scribes (Sadducees) but not the pharisees. The pharisees would have not power with the local Roman government.

The symbolism is thick. Jesus trial, death, resurrection which redeems all of mankind comes during a time when Jews celebrated Jehovah’s salvation of the Israelites (not all humanity). It speaks to the universality of Jesus’ salvific atonement.
Anointing at Bethany in the house of Simon the Leper
Judas agrees to Betray Jesus
The Passover with the Disciples
The Institution of the Lord’s Supper
Peter’s denial foretold
Jesus Prays in Gethsemane
The Betrayal and Arrest
vs. 51 has the out-of-nowhere story about a young naked dude. Matthew leaves that out.
vs 58 gives us an idea of what angered the high priest, chief priests, and the scribes. That is, Jesus’ claim to destroy and rebuild the temple in 3 days.”
and
vs. 61: Jeus’ claim to being the Messiah. Which Mark never records Jesus actually saying.
Peter denies Jesus

CHAPTER 15
Jesus before Pilate. Pilates question is more about Jesus being an insurrectionist
vs. 2 “Are you the King of the Jews?”
Mark has nothing about Pilate’s wife’s dream which we find in Matthew. Which is one reason scholars think Mark was written first. Mark is less anti-Jewish than Matthew. Mark also has nothing about Pilate washing his hands of Jesus’ death like Matthew has.
vs. 21 “Simon of Cyrene, the father of Alexander and Rufus.”
Who the heck are Alexander and Rufus?
vs31 is full of irony
“He saved others; he cannot save himself.” Jesus atonement will also save the chief priests.
Death of Jesus
vs. 33-42 Matthew has some saints being resurrected before Jesus’ resurrection. Mark does not have this story.
Both Mark and Matthew have the Aramaic:
“Elon, Eloi, lema sabachtani?”
Which is interesting since Mark’s Gospel was written for a Gentile and presumably a non-Aramaic speaking group. This lead me to believe this part of the Passion Story was important to early Christians – both Jew and Gentile.
vs. 39 Centurion guard:
“Truly this man was God’s Son.”
What would that title mean to a presumably polytheistic Roman soldier?
What would this mean for a Gentile Christian audience living in Rome?
This statement is also in Matthew which was written for a Jewish audience.
What would that title mean to a Jewish audience?
vs 40 The woman
Mary Magdalene
Martha mother of James the younger and Joses
Salome
Matthew 27:55
Mary Magdalene
Mary the mother of James and Joseph
mother of the sons of Zebedee

The Burial of Jesus
vs. 43
“Joseph of Arimathea, a respected member of the council, who was also himself waiting expectantly for the Kingdom of God…”
Matthew 27:57 changes Joseph’s description
“a rich man from Arimathea, named Joseph, who was also a disciple of Jesus.”
Matthew takes out Joseph’s tie to the Sanhedrin. Make Joseph seem less Jewish.
Why would Matthew do this?
It seems to follow the theory that the later Gospels acme more and more anti-Jewish.
Aslo Matthew has the Pharisees (not the Sadducees oddly enough) thinking that Jesus body will be taken away and so they ask Pilate to put some guards to protect the tomb.
vs 47
Has Mary Magdalene and Mary “the mothproof Joses” being where the body of Jesus was laid.
Matthew 27:61
Mary Magdalene and the “other Mary” were there “sitting opposite of the tomb”.
Is the “other Mary,” Mary the mother of James and Joseph mentioned in vs. 55 or a different Mary?
Why does Matthew include the two Marrys “sitting opposite of the tomb” while Mark does not?
If Matthew was written for a Jewish audience, could it be that audience understood what corpses made one ceremonially unclean? Maybe this would not have been important for Mark’s Gentile Christian audience where Mark just describes Mary and Mary seeing where the body was laid?
Matthew adds a guard at the tomb. Why?
CHAPTER 16
Mary and Mary the mother of James, and Salome come to the tomb.
Perhaps this is why Mark includes Mary and Mary as witnesses that Jesus body was actually laid in the tomb.
Matthew has the same witnesses of Jesus burial as the one’s coming to the tomb in the morning.
If they hand’t seen Jesus’ body in the tomb, then they cannot be witnesses that the tomb is empty.
Mark’s story is simple.
They get there and the tomb is open. No earthquake and not angel as Matthew records. There is instead an open tomb and a young man dressed in a white rob (any connection to the naked young man in Mark 14:51, 52?)
MARK’S SHORT ENDING
Mark suddenly ends with Mary and Mary running off and not following the young man’s instructions.
NRSV includes this after verse 8, which the KJV does not:
[And all that had been commanded them they told briefly to those around Peter. And afterward Jesus himself sent out through them, from the east to west, the sacred and imperishable proclamation of eternal salvation]
No verse number is attached to that^^^^^^
vs 9 the story starts again
Notice that only Mary Magdalene is there and connects her to a woman who had evil spirits casted out of her.
The story of Mary Magdalene having being exorcised occurs nowhere in the Gospel of Mark. We are not even introduced to Mary Magdalene until the crucifixion. Luke mentions Mary Magdalene as having devils and introduces her to his audience before the crucifixion. He is the Gospel writer that introduces her the earliest (Luke 8:2).
This seems to be one more piece of evidence that the earliest manuscripts of Mark ended with vs. 8. Vs. 9 of Mark seems to indicate a awareness of Luke, which was written after Mark.
vs. 10 she follows the young man’s command.
Jesus commission
vs 18 in Mark has the apostles being divinely protected. Something which Matthew leaves out.
Why the differences? Would it have to do with the audience of Matthew vs. Mark?
vs 19 has Jesus’ ascension which Matthew leave out too.
Why the differences? Would it have to do with the audiences of Matthew vs. Mark?