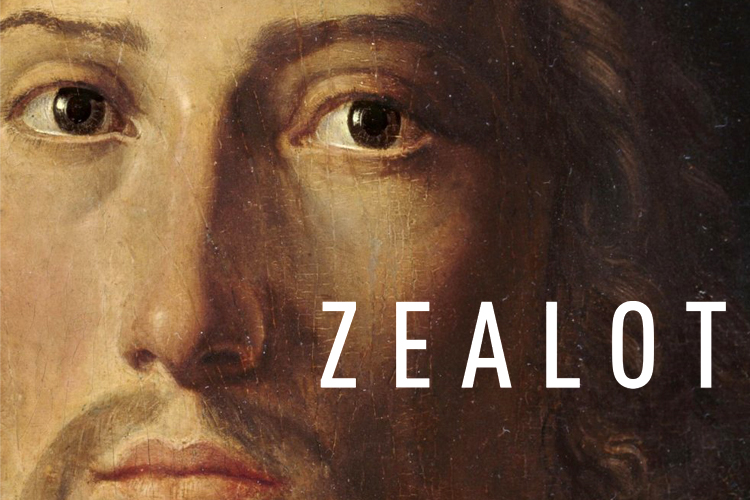 Zealot first came to my attention when I was teaching classes on the New Testament early Christianity at Stanford University the year the book was published. Several people in my classes had read it, but I did not get the opportunity to read it for myself until some time later.

Ever since the Jesus Seminar rocketed into the public eye with their radical approach to the much older question of the “historical Jesus,” books about the central figure of Christianity have continued to appear in a steady stream. They range across the spectrum of faith, skepticism, and cynicism. I applaud this activity, both out of personal intellectual interest, but also because for far too long the persona of Jesus or, more precisely, a heavily edited and even stylized persona, has distorted both the significance of Christianity and its message.

Enter Reza Aslan, a Muslim who has acquired the academic tools needed to seriously study and write about Christianity, much to the confusion of a certain news network. He has also willingly thrust himself into the public debate on religion in general as an informed and reasonable voice to counter the intellectual dilettantism found among the so-called “New Atheists.” His is a welcome addition to the public intellectual landscape.

Aslan’s book is a worthwhile read on several points. First and foremost, it delivers on its subtitle; it is an outstanding introduction to the “Life and Times of Jesus of Nazareth.” I still maintain that the best description of those times is the opening paragraph of Dicken’s A Tale of Two Cities, but Aslan gives us the details. He describes a people riven by political, religious, and economic strife, much of it self-inflicted, but taking place under the Roman occupation. We see the fragmented society, the gaping chasm between Haves and Have Nots, and the growth of an ill-defined but very present apocalyptic and messianic hope that Christian theologian Hans Küng summarized thus, “The world must be changed! Positively and radically changed.”

What many casual readers on Christianity do not know is that there were multiple uprisings and rebellions, all of them bloody, all of them not ending well for those who joined them. Further, each of the bandits, pretenders, madmen, or wannabes wrapped their anti-establishment ardor in a messianic mantle. The vast disagreements about the Messiah–even how many of them there would be—made it easy for fraudsters to claim that role. Aslan reviews this aspect of history with clarity and excellent detail. He is well-acquainted with his sources and, for the most part, uses them well.

The primary problem with the book is its title, Zealot. It is easy for the casual reader to assume that Aslan assumes that Jesus was a member of the Zealot party, which he most definitely was not. Even Aslan himself acknowledges this well into the book. However, “zealot” is also a generic term for someone of that period who had a higher-than normal antagonism towards Roman rule. If we accept this adjustment, then Jesus can fairly be called a Zealot; there is very little we can verify about him historically, but one thing we do know is that he was executed as an enemy of the Roman state. This is a separate question from that of the redemptive sacrifice that lies at the root of Christian theology. The historical fact is that Jesus was executed because he pissed off a Roman named Status Quo.

This antipathy between Jesus and Rome is the guiding star for Aslan’s reading of and interpretation of Jesus in the New Testament. He presents a Jesus defined mainly by an implacable opposition to Roman rule. While readers, myself included, may quibble that his political and economic agenda was broader than that, Aslan’s book is still valuable because it provides a good foundation for further discussion into the nature of his teaching and activism. This is fortunate, because the details of his ministry are where we find some of the truly puzzling aspects of Jesus and the movement he began.

One puzzle we have already alluded to, which is the exact reason why Jesus was put to death. Walter Herzog, in his wonderful study Parables as Subversive Speech; Jesus as Pedagogue of the Oppressed takes the same point of departure as Aslan, that the defining historical fact of Jesus’ life is his execution as an enemy of Rome. He points out that time and necessity can alter or distort the original intent of teachings, and then goes on to show how non-traditional readings of the parables show them in many cases to be narratives that unmask the mechanisms that oppress the vulnerable and preserve the power structures that are responsible. Herzog’s analysis is that Jesus’ radicalism was not so much anti-Roman as anti-inequality. Indeed, the earliest Christian hymns such as the Magnificat/Song of Mary (Luke 1:46-55) or the Nunc dimitus/Song of Simeon (Luke 2:29–32) make no mention of overthrowing Rome per se, but do speak of elevating the downtrodden at the expense of the rich and powerful. In Herzog’s reading, this did not become a problem until it threatened Roman interests, at which point Jesus was taken and crucified.

Another, equally challenging puzzle, is why Christianity survived at all. In all likelihood, it should have died along with its namesake, since it was Roman policy to kill not only the ringleaders of revolt or sedition but everyone associated with them; hence Peter’s panicked denials that he had anything to do with Jesus. Yet the movement survived. Why?

While Aslan points to the cleansing of the Temple as a violent act of sedition—one that is recorded in all four Gospels—I question whether this was as great an affront to the Romans as Aslan claims it to be. It was certainly a wild dust-up, and a direct challenge to the High Priesthood, and the triumphal entry into Jerusalem might have raised some Roman eyebrows, but we have no evidence that there was lethal force implied or involved. Nor do we see a direct call for the overthrow of Rome, in spite of the urging of Jesus’ followers. Aslan points out, as Herzog does, that texts and events are commonly repackaged to meet the needs of the hour, and the Gospels may have been sanitized to tone down the true nature of Jesus’ movement. But this does not ring true; had the movement been otherwise, if it had not embraced the nonviolence that we see in the Gospels, it seems all but impossible that the Romans would have tolerated it.

Instead, not only were the disciples allowed to live, they operated quite openly in Jerusalem, apparently with the approval of the authorities. Another fascinating clue comes to us via Rodney Stark’s excellent study The Rise of Christianity, where he points to evidence that Jesus had sympathizers in some high places, and that this is another reason, if not the main reason, why the followers of Jesus were not eliminated along with their leader.

Zealot provides plenty of grist for exploring these and other questions too often passed over when considering the life and ministry of Jesus. Apart from the unfortunate title choice, it is an interesting and quite painless introduction to the earliest days of Christianity and the sacred rage to shape a better world.