Why God Allowed Gays to Marry 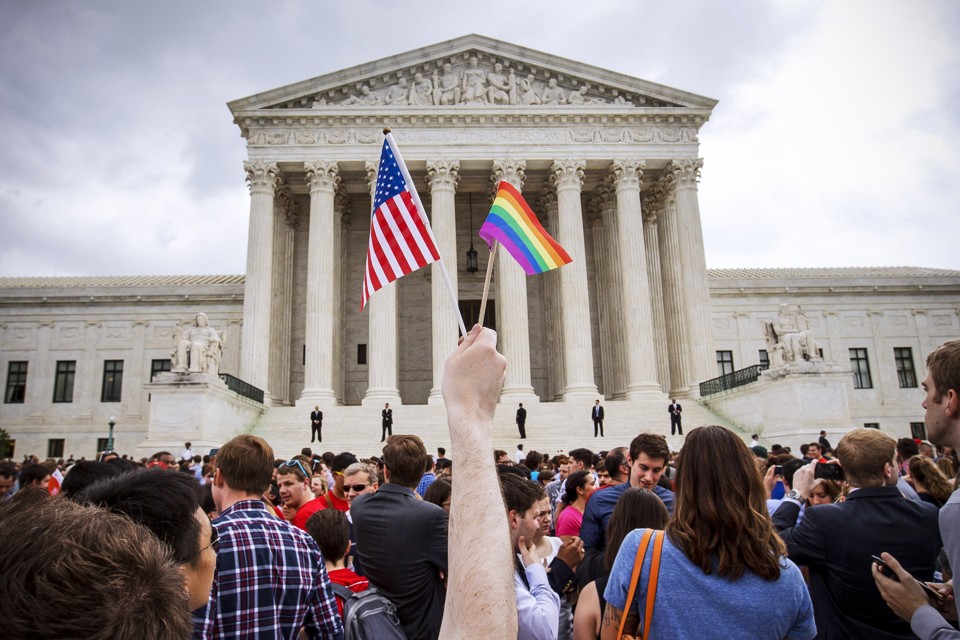 It’s been a wild and crazy week! Even though states have been legalizing gay marriage throughout the individual states, the Supreme Court just made it legal in all 50 states. For many Mormons and Christians this has been a troubling dark time. How could God allow this to happen? How could we lose?  Many end of the world scenarios have already been predicted along with people thinking this was the “darkest day” in American history. It really is gloomsville for many of my Mormon friends. Over the years the LDS Church has fought so hard and have spent millions of dollars to avoid this day, but alas this day has come all the same…

CHEER UP MY FELLOW BELIEVERS!

This isn’t a day to be down—the Lord works in mysterious ways! Even though the family is under major attack with gays waving their flags everywhere, now a small door has opened to strengthen the true family. Because God has allowed gay marriage to happen, the true Celestial order of marriage is just right around the corner! POLYGAMY! Justice John Roberts even stated: “I … can’t help but think this decision opens the door to legal polygamy”.  Already many of the news headlines have captured this same sentiment.

Just think about it:
Why else would God allow for his church to spend millions of millions of dollars (est. $45 M) and time on a losing campaign instead of using those dollars to help the poor? You can also blame the LDS Church for bringing marriage equality into the public conversation. The LDS Church literally shined a spotlight when it spent millions of dollars and man/woman hours for the cause of Prop 8 in California. (Members, not the LDS Church because the organization can’t get involved in politics) We even produced a document about the family solely on the basis of fighting gay marriage. This document has now been framed and hung in millions of Mormon homes.

Why have we done all this for a losing cause? Because it now has opened the door for polygamy! See how the Lord works? Mysterious ways, I tell you!

But wait a second Paul, we don’t practice polygamy anymore! Or don’t we? Let’s say a man and a woman are sealed in the temple and that woman happens to die years later. Tragic. But don’t worry that same man can now go and get married again. But wait, not only can he get married again, he could get sealed for time and all eternity even though he has another wife already waiting for him in the eternities. So when everyone dies, this man will live in the eternities with two women! Polygamy! Now let’s say a woman that was sealed to her husband loses him to death, is she able to get sealed to another man? No of course not, because this isn’t how polygamy works. Polygamy is ONE man, many woman. Could you imagine one woman with multiple men? Gross. Besides we all know why polygamy is to “raise up seed” and you can’t do that with a woman being sealed to multiple men. Why would this policy exist if we didn’t believe in the true doctrines of polygamy?

So you see, we practice polygamy! If we are going to be living this doctrine in the eternities, then we should probably get to practicing it as soon as possible – especially since it will no longer be against the law! Still not convinced? Here are some quotes to help you see the evils of your monogamous ways.

“This law of monogamy, or the monogamic system, laid the foundation for prostitution and the evils and diseases of the most revolting nature and character under which modern Christendom groans…” – Apostle Orson Pratt, Journal of Discourses, v. 13, p. 195

“Some of the nations of Europe who believe in the one wife system have actually forbidden a plurality of wives by their laws; and the consequences are that the whole country among them is overrun with the most abominable practices: adulteries and unlawful connections through all their villages, towns, cities, and country places to a most fearful extent.” – Apostle Orson Pratt, The Seer, p. 12

“Yes, [polygamy is] one of the relics of Adam, of Enoch, of Noah, of Abraham, of Isaac, of Jacob, of Moses, David, Solomon, the Prophets, of Jesus, and his apostles.” – Prophet Brigham Young, Journal of Discourses, v. 11, p. 328

“… it will be seen that the great Messiah who was the founder of the Christian religion was a polygamist… the Messiah chose… by marrying many honorable wives himself, to show to all future generations that he approbated the plurality of wives under the Christian dispensation in which His polygamist ancestors lived.
“We have clearly show that God the Father had a plurality of wives, one or more being in eternity, by whom He begat our spirits as well as the spirit of Jesus His First Born, and another being upon the earth by whom He begat the tabernacle of Jesus, as his only begotten in this world. We have also proved most clearly that the Son followed the example of his Father, and became the great Bridegroom to whom Kings’ daughters and many honorable wives were to be married. We have also proved that both God the Father and our Lord Jesus Christ inherit their wives in eternity as well as in time… And then it would be so shocking to the modesty of the very pious ladies of Christendom to see Abraham and his wives, Jacob and his wives, Jesus and his honorable wives, all eating occasionally at the same table, and visiting one another, and conversing about their numerous children and their kingdoms. Oh, ye delicate ladies of Christendom, how can you endure such a scene as this?… If you do not want your morals corrupted, and your delicate ears shocked, and your pious modesty put to the blush by the society of Polygamists and their wives, do not venture near the New Earth; for polygamists will be honored there, and will be among the chief rules in that Kingdom.” – Apostle Orson Pratt, The Seer, p. 172

“…the one-wife system not only degenerates the human family, both physically and intellectually, but it is entirely incompatible with philosophical notions of immortality; it is a lure to temptation, and has always proved a curse to a people.” – Prophet John Taylor, Millennial Star, Vol. 15, p. 227

“Monogamy, or restrictions by law to one wife, is no part of the economy of heaven among men. Such a system was commenced by the founders of the Roman empire….Rome became the mistress of the world, and introduced this order of monogamy wherever her sway was acknowledged. Thus this monogamic order of marriage, so esteemed by modern Christians as a holy sacrament and divine institution, is nothing but a system established by a set of robbers…. Why do we believe in and practice polygamy? Because the Lord introduced it to his servants in a revelation given to Joseph Smith, and the Lord’s servants have always practiced it. ‘And is that religion popular in heaven?’ it is the only popular religion there,…” – The Prophet Brigham Young, The Deseret News, August 6, 1862

“We breathe the free air, we have the best looking men and handsomest women, and if they (Non-Mormons) envy us our position, well they may, for they are a poor, narrow-minded, pinch-backed race of men, who chain themselves down to the law of monogamy, and live all their days under the dominion of one wife. They ought to be ashamed of such conduct, and the still fouler channel which flows from their practices; and it is not to be wondered at that they should envy those who so much better understand the social relations.” – Apostle George A Smith, Journal of Discourses, Vol. 3, page 291

“I have noticed that a man who has but one wife, and is inclined to that doctrine, soon begins to wither and dry up, while a man who goes into plurality [of wives] looks fresh, young, and sprightly. Why is this? Because God loves that man, and because he honors his word. Some of you may not believe this, but I not only believe it but I also know it. For a man of God to be confined to one woman is small business. I do not know what we would do if we had only one wife apiece.” – Apostle Heber C. Kimball, Journal of Discourses Vol 5, page 22

“Just ask yourselves, historians, when was monogamy introduced on to the face of the earth? When those buccaneers, who settled on the peninsula where Rome now stands, could not steal women enough to have two or three apiece, they passed a law that a man should have but one woman. And this started monogamy and the downfall of the plurality system. In the days of Jesus, Rome, having dominion over Jerusalem, they carried out the doctrine more or less. This was the rise, start and foundation of the doctrine of monogamy; and never till then was there a law passed, that we have any knowledge of, that a man should have but one wife.” – The Prophet Brigham Young, Journal of Discourses Vol. 12, page 262

“This monogamic order of marriage, so esteemed by modern Christians as a holy sacrament and divine institution, is nothing but a system established by a set of robbers… Why do we believe in and practice polygamy? Because the Lord introduced it to his servants in a revelation given to Joseph Smith, and the Lord’s servants have always practiced it. ‘And is that religion popular in heaven?’ It is the only popular religion there.” — Brigham Young (Deseret News, August 6, 1862)

“… [Joseph Smith taught] the doctrine of plural and celestial marriage is the most holy and important doctrine ever revealed to man on the earth, and that without obedience to that principle no man can ever attain to the fullness of exaltation in the celestial glory.” — William Clayton (Historical Record, vol. 6, p. 226)

How could we not want this? Do we not want a “fullness of exaltation in the celestial glory”? Do we not want to “become Gods” or even “Sons of God”? This is the celestial law laid out in the Doctrine & Covenants.  It is the “ONLY popular religion in heaven”. These blessings are now ours for the taking. What a blessed day this truely is! Thank you gays!!

Bonus – now we don’t have to spend anymore time or money fighting gay marriage! Now we can really focus on what really matters, polygamy… err feeding the poor. Thank you again gays!