“Where’s da mama in this story?” 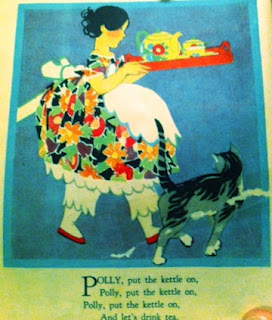 From the story book.

I spent one lovely evening of my winter break in a cozy home in Arizona with new friends, drinking herbal tea, eating delicious homemade treats, and of course, talking. The friends’ two year daughter reached that point beyond tired, where her little child’s eyes were flooded with giant tears. The mother whisked off to draw a bath, and the child’s sobs grew louder. “Do you want a bath?” A quiet, yet elongated, “No…” “Do you just want to go to bed?” A wimper of resignation and more tears, “Yes.” And so she did. But not before stories were read at bedside. When the mother returned, she explained that she didn’t know what happened, but that her young child was “nice as pie during story time.” I asked her what kind of stories her daughter liked, and was given a real answer: she liked complex, dramatic stories. Always. The more complicated and dramatic the plots, the better.

At that point, the mother pulled out a very old, but very beautiful book that I soon learned had once belonged to her husband’s great-grandmother. It was filled with vibrant illustrations in vivid, bold colors, drawn by different hands, in different styles. After showing me a few of her favorite illustrations, she turned to the story that she had just read, two times. It was the one about a mother goat who left her young kids at home, with a warning about a wolf who would come to trick them. Come the wolf did, and despite the warning they had received, the kids let the wolf in, to very unfortunately, be eaten. Thankfully, the mother goat returned just in time to cut her (still alive) babies out of the wolf’s tummy. It is a more grisly version of The Three Little Pigs, I know. And that was my friend’s point. That is the type of story that her two-year old loves. That is the type of story that her two-year old longs to hear.

And then my friend told me something else. Every time she reads her daughter a book or tale, the daughter asks, “Where’s da mama in this story?” because at two, she is young enough to know that there should be a mama there, but just old enough to know that there often isn’t. Another friend (from Exponent) once theorized that the phenomena of absent mothers shows up in children’s stories generally and Disney movies more specifically, because losing one’s mother is the scariest thing a child can think of, and, it can be thought by any child, no matter how young. As such, that storyline is able to speak to children in ways that others are not.

I thought of the child’s question again, “Where’s da mama in this story?” and then I thought of something else: Where is the mama in this theology? In this faith? In that Sacrament talk? Are we young enough to know that there should be a mama there, but also old enough to know that there often isn’t? That is how I feel: Young and old at the same time. Then there is the rejoicing and mourning I also feel—the first to know with Eliza that there is “a mother there,” the second for the darkness of the glass and the thickness of the veil: The absence of Heavenly Mother is one of the most frightening things that I can think of. It is something that I can understand. And, it speaks to me in ways that other theological story-lines do not.

This might explain why I was so struck by another quote and conversation shared with me some time ago, by one of my philosophy (of religion) friends, following his return to theism after many years of being away. The quote he introduced me to was from Meister Eckhart, who asked very simply, “What does God do all day long?” before answering even more simply, “God gives birth. From all eternity God lies on a maternity bed giving birth.” Someone restated, “The essence of God is birthing.” My friend affirmed: “I think so. It is odd that with all the birthing God does, i.e., birthing a Son, a Holy Spirit, and a creation, that God is called ‘Dad.'” “Rather than a mother?” I chimed in. “Rather than ‘Mommy.’ Instead of calling God ‘Abba,’ Jesus should have called him, ‘Mommy.'”

I think there is something there. If only because it would make a beautiful (and complete) fairy tale.