We’ve heard these arguments before… 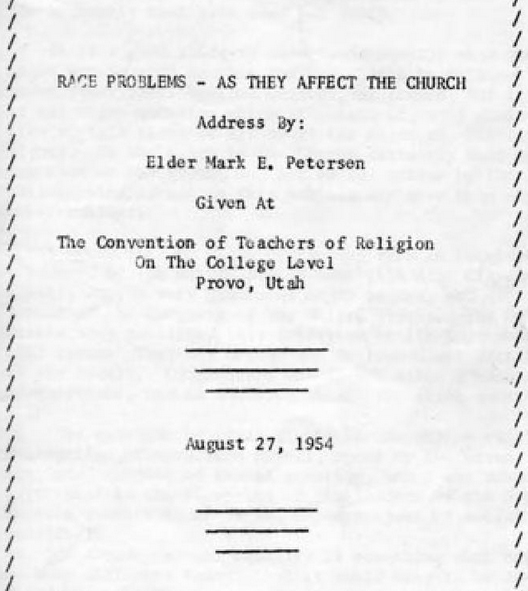 On August 27, 1954 Elder Mark E. Peterson of the Quorum of the Twelve Apostles delivered an address to a gathering of church religion teachers entitled “Race Problems – As They Affect The Church.”

He began by cautioning listeners that many in the Church have been deceived by the philosophies of men on the issue of civil rights:

“The discussion of civil rights, especially over the last 20 years, has drawn some very sharp lines. It has blinded the thinking of some of our own people, I believe. They have allowed their political affiliations to color their thinking to some extent, and then, of course, they have been persuaded by some of the arguments that have been put forth. …We who teach in the Church certainly must have our feet on the ground and not be led astray by the philosophies of men on this subject any more than on any other subject.”

He then summarized the problem as he perceived it:

“I think I have read enough to give you an idea of what the Negro is after. He is not just seeking the opportunity of sitting down in a cafe where white people eat. He isn’t just trying to ride on the same street-car or the same Pullman car with white people. It isn’t that he just desires to go to the same theater as the white people. From this, and other interviews I have read, it appears that the Negro seeks absorption with the white race. He will not be satisfied until he achieves it by intermarriage. That is his objective and we must face it.”

Elder Peterson continued by contextualizing the problem within the wider plan of salvation:

“With that in mind, can we account in any other way for the birth of some of the children of God in darkest Africa, or in flood-ridden China, or among the starving hordes of India, while some of the rest of us are born here in the United States? We cannot escape the conclusion that because of performance in our pre-existence some of us are born as Chinese, some as Japanese, some as Indians, some as Negroes, some as Americans, some as Latter-day Saints. These are rewards and punishments, fully in harmony with His established policy in dealing with sinners and saints, rewarding all according to their deeds.”

How do blacks fit into the plan of salvation, then?

“Think of the Negro, cursed as to the Priesthood. Are we prejudiced against him? Unjustly, sometimes we are accused of having such a prejudice. But what does the mercy of God have for him? This negro, who, in the pre-existence lived the type of life which justified the Lord in sending him to the earth in the lineage of Cain with a black skin, and possibly being born in darkest Africa—if that negro is willing when he hears the gospel to accept it, he may have many of the blessings of the gospel. In spite of all he did in the pre-existent life, the Lord is willing, if the Negro accepts the gospel with real, sincere faith, and is really converted, to give him the blessings of baptism and the gift of the Holy Ghost. If that Negro is faithful all his days, he can and will enter the celestial kingdom. He will go there as a servant, but he will get a celestial resurrection. He will get a place in the celestial glory.”

“Some years ago, back in 1936 to be exact, I became acquainted with a Negro family in Cincinnati, Ohio. I was back there for three months in connection with a newspaper assignment. I went to Church there and became acquainted with the family of a Negro man named Len Hope. Accidentally he had found some of our tracts when he lived down in Mississippi. He read them and became interested. He wrote to the mission headquarters for a Book of Mormon, and by his own study, converted himself. Later he met the Elders and joined the Church. … Up in Cincinnati, some of the members of the Church became extremely prejudiced against this Negro family. They met in a group, decided what to do and went to the Branch President, and said that either the Hope family must leave or they would all leave. The Branch President ruled that Brother Hope and his family could not come to Church meetings. It broke their hearts. But, the missionaries went out to the Hope home and there conducted Sunday School every Sunday, and served them the Sacrament. I had the privilege of visiting with the Hope family. I was in their home. I saw how their song book had been literally worn out and likewise their Doctrine and Covenants and Book of Mormon. As soon as I got to my hotel that Sunday afternoon, I wrote home to my wife and had her send them a supply of books.”

But what of those who argue for intermarriage?

“Now what is our policy in regard to inter-marriage? As to the Negro, of course, there is only one possible answer. We must not intermarry with the Negro. Why? If I were to marry a Negro woman and have children by her, my children would all be cursed as to the priesthood. Do I want my children cursed as to the priesthood? If there is one drop of Negro blood in my children, as I have read to you, they receive the curse. There isn’t any argument, therefore, as to inter-marriage with the Negro, is there? There are 50 million Negroes in the United States. If they were to achieve complete absorption with the white race, think what that would do. With 50 million Negroes inter-married with us, where would the priesthood be? Who could hold it, in all America? Think what that would do to the work of the Church!”

“Now we are generous with the Negro. We are willing that the Negro have the highest kind of education. I would be willing to let every Negro drive a Cadillac if they could afford it. I would be willing that they have all the advantages they can get out of life in the world. But let them enjoy these things among themselves. I think the Lord segregated the Negro and who is man to change that segregation? It reminds me of the scripture on marriage, ‘what God hath joined together, let not man put asunder.’ Only here we have the reverse of the thing—what God hath separated, let not man bring together again.”

Obviously the vast majority of Mormons no longer teach or believe any of this. The priesthood was extended to all worthy males in 1978 and the Church’s Gospel Topics essay on Race and the Priesthood now teaches that “the Church disavows the theories advanced in the past that black skin is a sign of divine disfavor or curse, or that it reflects unrighteous actions in a premortal life; that mixed-race marriages are a sin; or that blacks or people of any other race or ethnicity are inferior in any way to anyone else.”

Several questions then arise, including these:

1. Was Elder Peterson’s perspective on racial integration and intermarriage unique to himself at the time, or was he typical of the general consensus of either LDS Church leaders or broader Mormon culture in the 1950s? (Or both?)

2. How should we understand the contrast between Elder Peterson’s remarks of 1954 and the Race and the Priesthood essay of 2013?

4. How did blacks fit into Elder Peterson’s religious worldview? To him, how did they fit into the plan of salvation and what was their ultimate potential for salvation or exaltation?

5. Elder Peterson began his remarks by arguing that those who supported racial integration or intermarriage were deceived by the “philosophies of men.” Given that the Church now fully supports both racial integration as well as intermarriage, what does that imply for how we should interpret current cautions by our leaders about being deceived by the “philosophies of men”?

6. What is your reaction to the personal story about Elder Peterson’s visit to the Hope family? Was he right to implicitly endorse the decision of the branch to exclude them from their community while congratulating the Hope family for their faithfulness despite their ostracism? Should he have instead ordered their Branch President to “integrate” them back into the branch community? What would the consequences have been in each case?

8. Most faithful Mormons would likely not object to the conclusion that time has shown that Elder Peterson was simply wrong on this issue, despite his status as a “prophet, seer, and revelator.” What implications (if any) does this have for any other pressing contemporary issues, questions, or policies on which current “prophets, seers, and revelators” have taken strong positions, especially those that concern other minority groups in society or in the Church?

9. Some have argued that some or all of the current LDS Church policies regarding homosexuals and same-sex marriage, including the new handbook policy regarding children in such family arrangements, are to one degree or another the moral equivalent to the priesthood ban on those of African descent. Is this a reasonable argument? Why or why not?