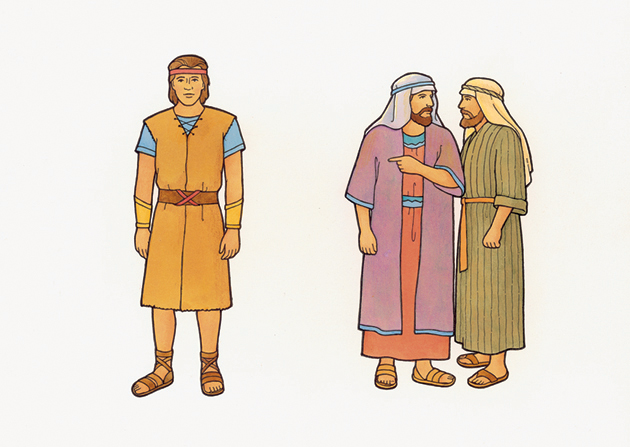 I was born of goodly parents. Both from a long line of Pioneer stock Mormons. One day my father awoke from a dream and announced we would be moving to a small town he had never visited. We had no family there. We had no friends there. Considering it was a town of 700 people, it might as well have been the wilderness. Because I was 8 years old, I had little say in the matter. However, like Nephi, I was ready and willing. From my Mormon upbringing, the thought of an inspired move didn’t seem all that odd to me. My father often claimed inspiration from the Lord, so revelations were a typical occurrence. Like Nephi, “I did believe all the words which had been spoken by my father” (1 Nephi 2:16). 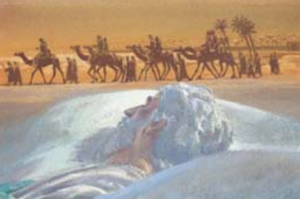 As a boy, Mormonism was very important to me. It was a large part of my identity. Almost all of my friends were Mormon, and all of my family was Mormon. When I thought people were nice or fun I automatically assumed they were Mormon. I was sure that with enough scripture study and prayer I was destined for leadership positions in the Church. As God told Nephi, “inasmuch as thou shalt keep my commandments, thou shalt be made a ruler and a teacher over they brethren” (1 Nephi 2:22). It was exhilerating to belong to the one True Church. I knew I was valiant in the pre-existence; not only did I choose to come to Earth, but I was also born into the Church! I was prepared and ready. “I will go and do the things which the Lord hath commanded” (1 Nephi 3:7). 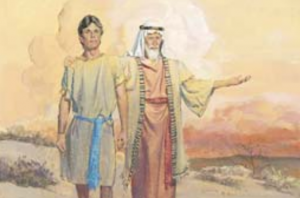 As I’ve gotten older, Nephi looks more and more self-righteous. He always complains about the faults of his brothers, and condescendingly tells them to pray harder for the confirmations he has received. The murmurings of Laman and Lemuel start to look more and more reasonable. They still come off as whiney complainers, but the record was writen by Nephi, after all. I feel similar to Laman and Lemuel as my faith in the Church has changed and evolved. Where I once resolutely answered questions in Sunday School, sure in my knowledge of the truth, things are much murkier now. Where before I might have asked with Nephi, “How is it that ye have not hearkened unto the word of the Lord?” now I question along with Laman and Lemuel (1 Nephi 7:9). How can you know that the Godhead is made up of three distinct beings when the First Vision story originally only had one being? Why is a literal angelically-derived Priesthood a requirement when in very early Mormonism they never claimed that angels conferred the Priesthood? Where earlier in my life I might have asked, “Have ye inquired of the Lord?” (1 Nephi 15:8) now I can only respond with “the Lord maketh no such thing known unto [me]” (1 Nephi 15:9). 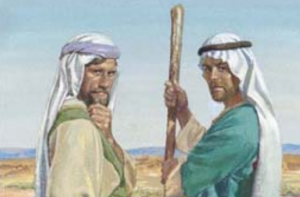 Perhaps even more reviled than Laman and Lemuel, Korihor starts to make more and more sense as my faith changes. While he is a caricature of a non-believer, he still makes some valid points. Some things that are taught in Church definitely feel like “foolish traditions of your fathers “(Alma 30:14). I have often asked those who bear their testimony of “knowing” something is true: “How do you know of their surety? Behold, ye cannot know of things which ye do not see” (Alma 30:15). The Nephites didn’t like Korihor’s teaching, but they were stuck because “there was no law against a man’s belief” (Alma 30:11). However, a loophole was found because he was bound and carried to the High Priest. There are many theories on what Korihor’s crime was but I won’t spend time discussing that here. When Korihor was brought before the High Priest, rather than being taken at his word that “I do not believe that there is a God,” (Alma 30:48) instead his sincerity was questioned. “Behold, I know that thou believest, but thou art possessed with a lying spirit” (Alma 30:42). When Korihor asks for a sign, he is struck dumb, and is left to begging. Do the Nephites help him after his mistake? Does someone take him in and help him? Apparently not, as he is eventually “run upon and trodden down, even until he was dead” (Alma 30:59). The fact that in the story Korihor admits he did know there is a God and an angel of Satan told him what to say reinforces negative stereotypes about doubters in the Church. 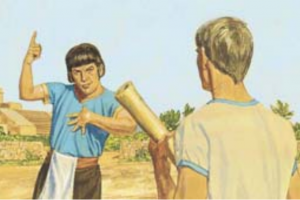 In the modern Church we appear to be making some strides in accepting those that do not have a strong and simple faith. President Uchtdorf said, “[R]egardless of your circumstances, your personal history, or the strength of your testimony, there is room for you in this Church.” However even now, as in Book of Mormon times, the sincerity of the doubter is often as big a concern as helping the doubter. In response to questions about Kate Kelly’s excommunication, the Church released this statement: “There is room for questions and we welcome sincere conversations” (emphasis added). The implication seems to be that if the questioner isn’t sincere, then he doesn’t deserve help. I have had my sincerity questioned at Church. It seems similar to the loophole employed with Korihor. We only need to help those with sincere questions. 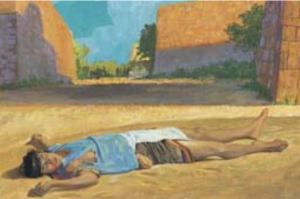 Once in an Elder’s Quorum meeting we read a quote from a former President of the Church to the effect that the Melchizedek Priesthood is a requirement for salvation. I asked how that can be true since women do not need the Priesthood for salvation. A member of the quorum said that I was trying to take everyone “down a path.” After Church I invited him to an empty classroom and stated that I thought his comment was inappropriate. He began yelling at me and claimed that he could see what I’m really trying to do with my questions in class. It is all too easy to accuse the questioner of ulterior motives rather than listening to the questions. It is easier to question another person’s sincerity than to answer questions.

During testimony meeting I once invited any who are discouraged to speak to me because I know what it is like to be discouraged. My bishop called me into his office and asked if I was starting an apostate group. Apparently it is easier to assume apostasy than to think that members would be helped by supporting each other. When I expressed concerns or doubts to my former bishop his first question was similar to Nephi’s to his brothers: “Are you reading your scriptures and praying?” It is easy to assume that those without answers aren’t putting enough work in. Those of us without answers aren’t sincerely seeking those answers.

It may be that experiences like mine are rare, and that most members of the Church are patient and willing to help those with questions. Or it could be that I’m just a particulary abrasive person. I hope that our Church has come farther than the Nephites that offered no help to Korihor after he was struck dumb and begging. Talks like President Uchtdorf’s are hopefully a sign of change when it comes to dealing with those that may not fit the mold. Though I might be like Korihor in some ways, my experiences have made me more sensitive to those that are a little different. The “crazy people” in Sunday School don’t sound quite so crazy anymore. I’m going to do my part to make others feel like they are part of the ward. If we all help the beggars, those that have been ostracized from the community like Korihor, maybe we can stop them from being trampled.