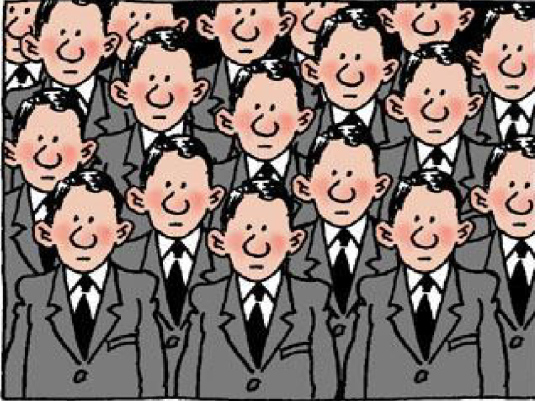 There was a time when I just wanted to fit in. I wanted to be liked. It’s a basic human need but I think that it’s also a fairly universal desire. Unfortunately, I was an awkward kid, transplanted mid-year in a small school in a small town where the cliques were already established. I made good friends in time, and got along just fine, but I didn’t ever “fit in”. By sixth grade, I was a hopeless outsider. I was okay with that, but there was this girl…and I suddenly wanted to be one of the popular kids. I knew that if I got some sweet designer jeans and a round backed comb to put in the back pocket, I would be in like Flynn. I got the jeans, I got the comb, and in my new-found confidence I declared my romantic intent to her. She told me to kiss-off. Kiss off!? I was devastated. Soon she and her group of friends started to poke fun at me in the good-natured (and sometimes not) way that kids do. I was eventually okay with that too, but at a pivotal time when I was beginning to explore ideas of personal identity, the ridicule had a significant effect. I wasn’t sure who I wanted to be, but I knew I didn’t want to be like them. I started doing everything I could to be different from them, which produced some very interesting results. 12-year-olds rarely have a well developed sense of style. When I got into Jr. High, I found a group of like-minded kids who had all been through similar experiences and together we discovered New-Wave and Punk Rock. We reinforced each others ideas about individuality and counter culturalism and we conformed in our rebellion. Now overlay all of this with the fact that I was going to Church with the same kids who were mocking me and you’ve got a potentially damaging situation. Many of my fellow rebels rejected the Church or, at least, the common standards. Luckily, my Parents provided support and a very safe home environment. I felt free to explore new ideas and to develop my own opinions, about society at large, and about the Church. This sense of individuality became very important to me, and it still is, although it manifests now in very different ways. It has prompted me to wonder, what is the value of individuality?

It seems obvious that unity provides strength. The combined efforts of many can accomplish what a single effort cannot. Aesop illustrated this concept in his fable about a farmer, with bickering sons, who demonstrated the strength of unity by bundling sticks. Each son could easily break a single stick, but none of them could break the bundle alone. In the Church we are encouraged to “Meet together oft” to discuss the principles of the Gospel and to, hopefully, benefit from a variety of opinions and perspectives. Together we learn more about the purposes of life than we could by searching alone. Our potential for experience is finite but when we are able to commune with others who have had different experiences, we may understand a much broader view of the world.

When a certain task requires a greater diversity of skills than any single person has, then it becomes beneficial to work together. Steve Jobs couldn’t have possibly built an ipod by himself. Each member of the group or committee, contributes her individual skill and strength to the task. So if each person hadn’t developed unique skills, the task would be impossible. Hypothetically, if all members in a culture were the same, if no one had individual or exceptional abilities, the community would stagnate, atrophy, and dwindle. Only when individuality can be expressed, will a culture advance. So if it is to the advantage of a culture to include and promote strong individuals then why are we constantly encouraged socially to conform? why this grand homogenization? Innovation is almost always faced with opposition. It has gotten to the point where a persons individual worth is challenged if they do not demonstrate outward signs of conformity or comply with some pre-determined arbitrary public standard. The culture of the Church is no different, we are each participants in the society where we live regardless of our efforts to not be “of the world”. Beardliness, modesty and white shirts have become clubs to beat each other with rather than expressions of personality, individual respect or reverence. On the other hand, some personal achievement is publicly celebrated. Our cultural values don’t seem to correspond to what, historically, has promoted or advanced our civilizations. Pop culture values entertainment more than science, religion, law, or art. We reward actors and athletes with celebrity and wealth while scientists and teachers have to struggle and sacrifice to make their contributions.

When I left the sheltered valleys of Utah to live in Seattle, my naive sensibilities were constantly challenged. Attending a very liberal Art School didn’t make things any easier but I haven’t experienced a richer season of personal and spiritual growth. I attended Episcopal, Catholic and Hindu services, meditated with Buddhist monks, learned Yoga, went to the Gay pride parade and a lesbian commitment ceremony. I had fellow students and new friends from every race, age group, and philosophical background. All of these experiences strengthened my faith in Gospel principles and contributed, in no small part, to the person I am today, and I really like this guy. In a global Church that represents a hugely diverse membership, we will benefit from a correspondingly large diversity of opinion, experience and culture. Rather than avoiding the “other” or fearing the unfamiliar, we should allow all the benefits that it can offer. The discomfort will pass, and the reward is the change that we came to Earth for.

So, I’m a weirdo now. I think it’s funny how defensive some people get when I tell them that. They want me to be comfortable in sameness but I don’t want to fit in anymore, and I have plenty of people who like me just like this. I like people who are different from me, including some of the kids from that elementary school class many (many, many) years ago. I learn about myself from them and I value their perspective on the world. By refusing to just comply with the “norm” I’ve learned to think conscientiously and independently, and I’ve learned that unity doesn’t require homogeneity.