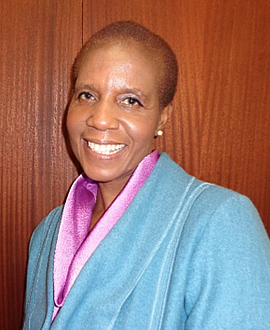 It occurred to me that I’d never seen a black woman sitting in those red chairs in the Conference Center before this past Saturday night. I’d never seen a black woman speak her Father’s name before the stand let alone leave us with her words of worship and praise. Sister Mkhabela is not the first woman of color to pray in the Women’s Meeting. Sister Ofa Kaufusi shared her prayer in March of this year. However, Mkhabela is the first black woman to do so in what is now being described as a session of General Conference. Admittedly, I was somewhat skeptical of Dorah Mkhabela’s appointment to the Young Women’s board. While I was glad to be represented in some capacity, the varied histories of colonization in Africa and chattel slavery in the United States can make for different experiences in the Church and interactions with other races. But in this moment of faith, I was brought to tears. It matters when you don’t see yourself standing amongst those whom Saints hold as modern day prophets and apostles as well as General Relief Society, Young Women’s and Primary presidents and councilors. Looking at a chart of General Authorities and Auxiliaries, there seems to be a disconnect between the “global Church” and what is being seen amongst our leaders in Salt Lake. Such a pronouncement of faith before a global audience was endearing not only as a Latter-day Saint but also as a person of black African descent.

Sister Mkhabela’s presence marks an important point in a history marred by anti-black racism conflated with an interpretation of the Curses of Ham and Cain and other scriptures pertaining to physical bondage. It’s been less than 125 years since one of the first black Mormons, Jane Elizabeth Manning James was sealed by proxy (as she was not allowed to perform the ordinance) to Joseph Smith, Jr. as “a Servitor for eternity to the prophet Joseph Smith and in this capacity be connected with his family and be obedient to him in all things in the Lord as a faithful Servitor.” (Salt Lake Temple Adoption Record, May 18, 1894, Book A, p. 26) So to hear Sister Mkhabela’s prayer and to see her stand before us was not just an act of faith; it challenged the theology that drove various prophets, apostles and other Church leaders to declare that people of black African descent were under a curse. In many ways, it reaffirmed for me that faith and prayer can be an act of liberation; from the spiritual bondage that was placed on black people by denying us access to the highest level of the Celestial Kingdom to the physical barriers that kept us from appearing before our brothers and sisters. That is what makes the moment so memorable for me and perhaps so many black Saints.

In an existence that shifts between the hyper-visible and invisible, black Saints can flourish in the teachings of the Savior despite white supremacist narratives that would suggest otherwise. Sister Mkhabela’s prayer serves as a testament that we are here in this Church, in this Gospel and no one can make us leave our Parents’ house.