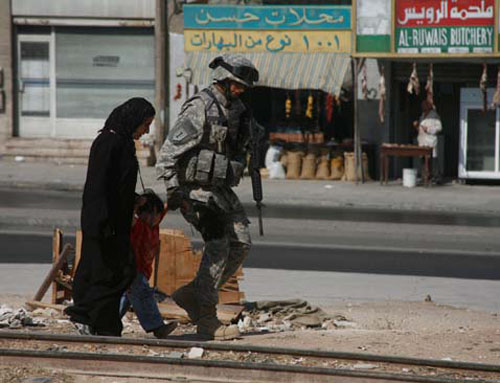 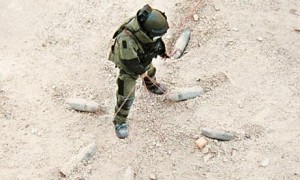 Scene from “The Hurt Locker”

Recently I have been affected deeply by shows and movies that have opened my eyes to the ugliness of war. Shows like Band of Brothers, Letters from Iwo Jima, Black Hawk Down, Saving Private Ryan, and, most recently, The Hurt Locker have left me speechless – speechless due to the evil displayed in these movies and speechless for those that paid a price mentally as well as physically, some paying the ultimate price. There were soldiers with many flaws looking after their comrades, making sure they were safe on every corner. Soldiers were put into situations where no human should be. With all this in my head, I wanted to have better insight into a Mormon’s experience of war. I knew of one friend that could give an honest view within the Mormon realm of what war meant to him. Because he is an active member of the military, we decided it would be best to keep his real name private. I was happy when he chose the name “Atticus” because that is the name of my all time favorite character in any book or movie (To Kill a Mockingbird). We hope that Atticus will be back to post more insightful views of his experiences. When commenting on this post, he will reply using my account.

I served in Iraq during the surge. Serving in Iraq is, like all things, good and bad. The work is very rewarding – what you’re doing really matters. But it’s also quite painful – you see a lot of terrible things and you are so far from your family.

Serving in a combat zone can give someone new insight into the war chapters of the Book of Mormon. I remember sitting in our LDS group meeting one Sunday morning when the teacher/speaker (we had a one hour combined sacrament-Sunday school meeting) reminded us of the sacred support of our wives and children back home (Alma 44:5). I wonder how many people have ever read that verse and been motivated to work harder and be more dedicated because their heart breaks for their loved ones back home who support them.

Another part of the Book of Mormon that gains a new perspective is the story of Helaman and his 2,000 Stripling Soldiers (the phrase “Stripling Warriors” does not exist in the Book of Mormon). The story is found in Alma 53:8-23 and Alma 56-57. These 2,000 Stripling Soldiers are in two major engagements: one in Alma 56 and one in Alma 57. In both engagements, not a single one of the 2,000 Stripling Soldiers dies. In the second engagement, 200 of them are badly wounded, but none of them die (Alma 56:56; 57:24). In contrast, while fighting along side the Stripling Warriors in the first engagement, Antipus and many of his officers (Mormon uses the term leaders, but I will use officers to describe the class of warriors who direct a battle and make strategy) die, and 1,000 men die in the second engagement (Alma 56:51; 57:26). 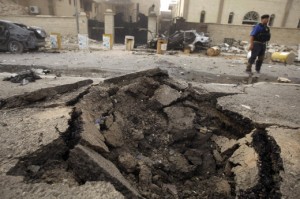 Scene from “The Hurt Locker”

While in Baghdad, I witnessed a modern day version of this story on a much smaller scale. It started one night when the base was hit by 120 milometer Katyusha rockets. A giant voice alerted us: “INCOMING! INCOMING! INCOMING!” You could feel the ground bump and the shock wave with every rocket. It was my first indirect fire incident and pretty scary. At this same time, a pickup truck was driving on the base complex from one place to another inside the wire where it’s “safe.” According to a witness who arrived on the scene shortly after the attack, the truck was a four door “mini-truck” with a person in the front seat and two people in the back seat; the front passenger seat was empty. At a stop sign a rocket landed in the truck-bed. The witness told me the rocket left a big hole in the ground under the truck, ripped the rear-differential apart, and killed the two people in the back seat. One of the dead was a young mother of three (it is possible that my memory fails me and she only had two young children). The driver lived. He was gravely injured – just like many of the Stripling Soldiers – but he made it. He made it because the two people in the back seat absorbed the blast. They died and he lived.

Helaman does a headcount

This is just like the Stripling Warriors. They survive the first engagement because Antipus and his men absorb the blast. Same for the second engagement where 1,000 men die. However, I never hear anyone in church praise Antipus and his men for their sacrifice. I’ve also never heard anyone mourn the loss of the 1,000 men who died absorbing the blast from the Lamanites in the second engagement. In that second engagement, the rest of the army’s casualties equaled 50 percent of the Stripling Soldier’s total end strength. 50 percent! (The Stripling Warriors must have been a small percentage of the Nephite army because the number of casualties the army suffered compared to the Stripling Soldier’s end strength and when they are reinforced in Alma 57:6, they get three times the number of Stripling Soldiers and it is not described as a massive increase in their numbers.)

In the first engagement, many of the officers die. That means many of their “enlisted” men would likely have died first because by the time the officers start dying in large numbers your lines have broken; you protect your leadership so they can direct the battle. I know officers die in battle without the lines breaking; however, Antipus appears to be the equivalent of a general officer who would not be risked because of his value as a strategist. It also says that so many of them died that it caused confusion. This was a devastating and bloody loss for the Nephites, but no one remembers what they did to save those 2,000 boys.

Speaking of leadership directing the battle, Helaman says his 2,000 soldiers obeyed him with “exactness” in the second engagement, and he attributes this to their survival (Alma 57:21). We will never know what Helaman left out when he wrote Moroni, but I suspect, based on the high casualty rate amongst the other men fighting along side the Stripling Soldiers, that the leadership was maneuvering those young men to keep them alive. This doesn’t mean they didn’t fight well as Helaman claims, but as a small percentage of the total Nephite army end strength, they could have easily been kept where the Lamanites were the weakest. In this way, Helaman and the others were placing them in the “front seat” with human shields behind them absorbing the blast. Of course they survived by obeying Helaman with exactness – he kept them out of the worst of it.

Now, I could be wrong. Perhaps Helaman ordered those men into the center of the battle in the second engagement even though they were a minority of the army, and God only saved those young soldiers while leaving Antipus, his officers and the other men to die in mass. But what kind of God does that? More likely, Helaman maneuvered his men in a way, and the other leaders maneuvered their men in a way, that kept the boys alive. Why else would Helaman make such a big deal of his young soldiers doing what soldiers do – obey orders with “exactness”? Later when Helaman writes to Moroni, another general officer who will quickly recognize what happened, he shifts the focus from how he sacrificed 1,000 other men to save his boys to divine intervention. 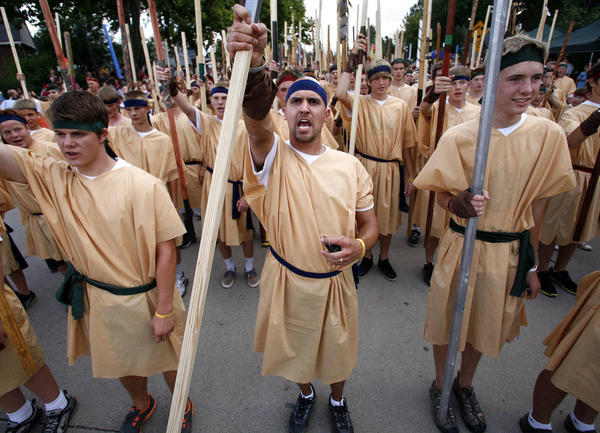 Every culture on Earth celebrates those who die to save another’s life. Why don’t we do the same when we retell this story? Why don’t we celebrate Antipus and his men? Why don’t we celebrate the 1,000 men who died in the second engagement? Because of their sacrifice, those boys went home to their families. It’s just like the person in the front seat of the truck who went home to his family because two people in the back seat did not go home to theirs. This kind of thing happens all the time in war, only no one is inhuman enough to say God saved the person in the front seat for being more righteous than the mother of three young children who died in the back seat.