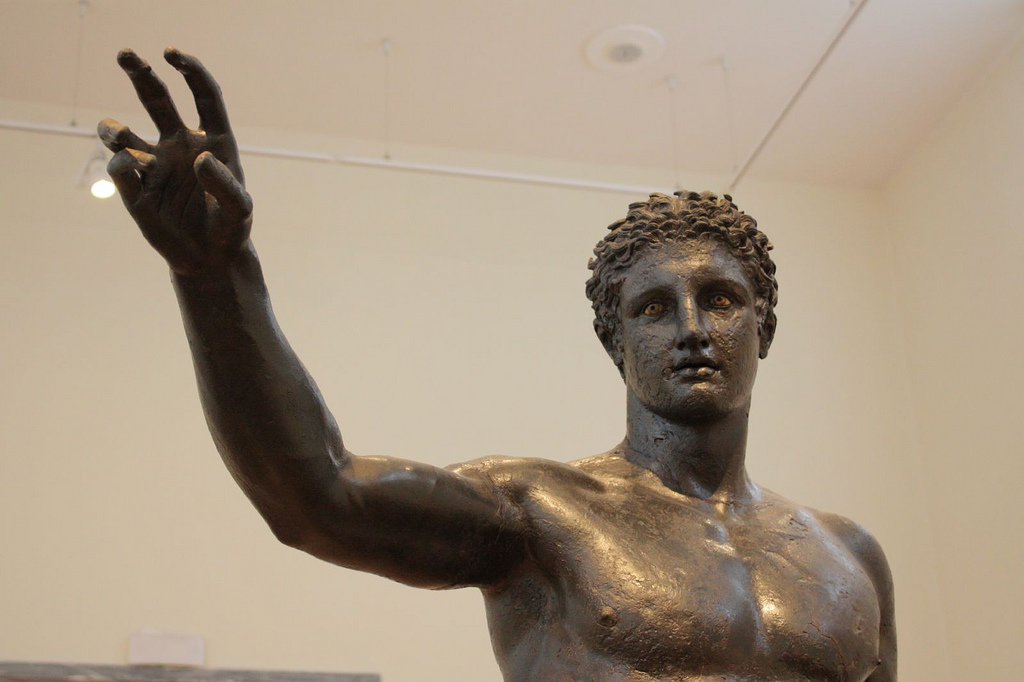 It was early 2012, and Alain de Botton had just published Religion for Atheists, a book which asserts that everyone — even non-believers — should embrace the good features of religion, like community and service.

When Religion for Atheists was published, de Botton assumed it wouldn’t have a sizeable audience in Utah (what, with all the Mormons and all),  and so he didn’t include my state in the list of places to visit during his book tour.

Imagine his surprise, then, when he discovered that book sales were eight times higher in Utah than in any other state.

Eight times higher in Utah? Why would that be?

De Botton postulated that there’s a crowd of people in Utah who love the good and beautiful features of Mormonism but who struggle with some of the religion’s literal truth claims. That is, they recognize that the organization of the Church is amazing, but they’re unsettled by Mormonism’s historical narrative so much that they leave the Church.

My personal experience reflects this. I’ve seen the goodness and beauty in Mormonism, but I’ve also seen family members and friends leave the Church over the truth claims, which has in turn led me to reflect more fully on my religion.

Based on my experience, I assume that lots of people are in a similar situation, so I wrote this essay in order to navigate through some tensions and hopefully, more than anything, help the community I grew up in move forward in a healthy way.

To that end, I’ll talk about three Mormonisms:

These three ideals — goodness, beauty, and truth — were a focal point for ancient Athenian philosophers, and I’ve found that they’re just as relevant today. At the very least, I’ve found that breaking my religion down like this has helped me make sense of what’s going on in my community.

The Mormonism of Goodness

Religion that is pure and undefiled before God, the Father, is this: to visit orphans and widows in their affliction, and to keep oneself unstained from the world. – James 1:27

For many Mormons, church is mostly about doing good.

I’ve seen it hundreds of times: Mormons bring food to neighbors who’ve recently had a baby, spend time with the sick, help people move out of their homes, etc. The church is a well-oiled service machine, and it helps that people meet for three hours each Sunday to (hopefully!) talk about how they can serve better.

It’s one reason why when I was a teenager my family would visit the lonely and elderly in our neighborhood every Sunday afternoon.

It’s also one reason why many active Mormons are sad when people leave. They think that by leaving, the dissenters reject goodness. And that line of thinking it isn’t entirely unreasonable.

For instance, many of the teenagers in my neighborhood left the Church, and when they did they were suddenly less likely to show up for community service projects and more likely to invest their time in general punkery — you know, kicking trash cans over and smoking cigarettes by the bus stop.

So Mormons see a correlation between activity in the church and activity in good things, and they therefore worry about people who stop participating. For most Mormons the church equals goodness, and there is some legitimacy to that formula.

The Mormonism of Beauty

In addition to striving for goodness, Mormons talk a lot about the Spirit of God, which is generally conveyed in a beautiful feeling of awe.

I’ve experienced this feeling myself while singing hymns like “Be Still My Soul” and “The Spirit of God,” as well as through hearing people bear their own feelings of awe in Mormon testimony meetings.

I also felt the Spirit when, as a teenager, I watched a film about the martyrdom of Joseph Smith.

It was in seminary, the lights were out, and there was silence in the room as the events unfolded. Smith stood bravely against a mob of men who rushed into Carthage Jail and gunned him down. After he fell from a window and died, the orchestral score swelled and these words from John Taylor were shown on the screen:

Joseph Smith, the Prophet and Seer of the Lord, has done more, save Jesus only, for the salvation of men in this world, than any other man that ever lived in it.

It was an emotional experience for my teenage self and therefore a touchstone in my testimony of Joseph Smith as a prophet of God.

The Mormonism of Truth, Part One: Discovering That I Didn’t Know

However, there was a problem with the video about Joseph Smith’s martyrdom — a problem I didn’t discover until years later when I was a missionary in California. It was my second week in the field, and my companion and I had knocked on the door of a religious nutjob who immediately and excitedly let us in (as religious nutjobs were prone to do).

For some reason our conversation centered on Joseph Smith’s death at Carthage. The guy insisted that Smith wasn’t martyred — that he instead died in a gunfight.

I told him he was wrong, and as proof I showed him the official account of Smith’s martyrdom in Doctrine and Covenants, section 135. But the guy wasn’t persuaded, and we left without accomplishing much.

A few months later I was digging around an LDS library and found A Comprehensive History of the Church by B.H. Roberts, a Mormon general authority. There I discovered that Joseph and Hyrum had pistols in Carthage, pistols they used to defend themselves.

Now, in the grand scheme of things, the fact that Joseph and Hyrum had pistols in Carthage isn’t a big deal. It was the wild west, and they were scared for their lives. It hardly makes Carthage a gunfight.

But it sparked questions. I had grown up in the Church, and yet I hadn’t known Joseph and Hyrum had guns in Carthage. What other truths didn’t I know about Mormon history?

The Mormonism of Truth, Part Two: Asking Questions about the Truth Claims

I began to be more inquisitive. I dug into extraneous church materials whenever I could (which wasn’t often because missionaries don’t get access to a wide range of books), and I discovered enough questions to fill my head:

I won’t repeat the full list here. I just mean to say that I filled my head with questions and this was a good thing. As Dieter F. Uchtdorf says, “I’m not sure how one can discover truth without asking questions. …  Asking questions isn’t a sign of weakness. It’s a precursor to growth.”

Unfortunately, my questions largely faded away when I returned home from my mission.

At that point I was focused on school, work, and dating. I shelved my religious inquiry and stopped reading church history altogether. It’s incredible how quickly worries disappear when you ignore them.

To understand their concerns, I dove back into church history in earnest, reading books like Rough Stone Rolling, People of Paradox, David O. McKay and The Rise of Modern Mormonism, and so on. I also read about different Mormon topics across the Internet, topics that revealed truths about the origins of the church that were (once again) new to me.

Around the same time, I was randomly chosen by the Church to participate in a lengthy six-part survey. One part asked for my thoughts about the historicity of Mormonism. I responded with candor, saying the Church should be as transparent as possible when retelling its history so members won’t feel hurt when they discover (as they eventually will) more details about the Church’s truth claims.

I suspect a lot of people share my feelings because the Church is starting to open up more and more.

The Mormonism of Truth, Part Three: The Church Opens Up about Its History

The Church has recently been publishing articles about controversial topics.

For example, two months ago they published an essay on the differing accounts of Joseph Smith’s first vision. You can now read each account on the Church’s own site, and you can see that the official version (the one most Mormons have read) differs from the original version.

Something similar happened for lots of events and revelations in early Church history. Two more examples: The original version of the Book of Mormon repeatedly says that Jesus is God the Father (three times in 1 Nephi 11, and many places elsewhere), and chapter 28 of the Book of Commandments doesn’t say that Peter, James, and John ordained Joseph Smith to the priesthood while section 27 of the Doctrine & Covenants (the equivalent revelation) does.

The Book of Mormon
The Restoration of the Priesthood

The Doctrine and Covenants

The Endowment
The Celestial Law of Marriage
The Martyrdom

My guess is that the Church will soon publish articles about each of these topics (though they may remain sensitive to some changes in the endowment ceremony and the Book of Mormon).

For instance, they recently published an article describing how Smith looked into a hat to translate the Book of Mormon and an article about how church leaders continued to allow new plural marriages even after the 1890 manifesto banning polygamy was revealed.

We’re moving toward a more transparent era in Church history, and as a result people are discovering more about the Church’s truth claims.

What should we Mormons do as a result?

A Possible Way Forward for a Maturing Faith, or: Goodness, Beauty, and Truth Redux

For me, the answer lies in the three Athenian ideals — goodness, beauty, and truth.

First, we should recognize that no organization has fully reached any of these ideals. While the Mormon Church tends to prioritize goodness and beauty over truth, it has shortcomings in all three areas — the same way all of us do.

Third, we should recognize we all need to pursue goodness, beauty, and truth — regardless of our religious belief. Those who stay LDS shouldn’t shirk from learning about the truths of Church history, and those who leave shouldn’t let go of the goodness and beauty (and truth) they’ve found in the Church. Whatever our decision about belief, we should be moving forward with each step.

To do so, we can consistently reflect on how we’re doing by asking ourselves:

Is my desire to be good (to family, friends, and strangers) growing or diminishing?

When was the last time I really experienced beauty?

Do I hide from truth, or do I seek it out?

If we can respond positively to these questions without deceiving ourselves, we’re moving forward. That goes for everyone, across the world.

Jon received his master's degree in writing and rhetoric from BYU.

All posts by Jon Ogden