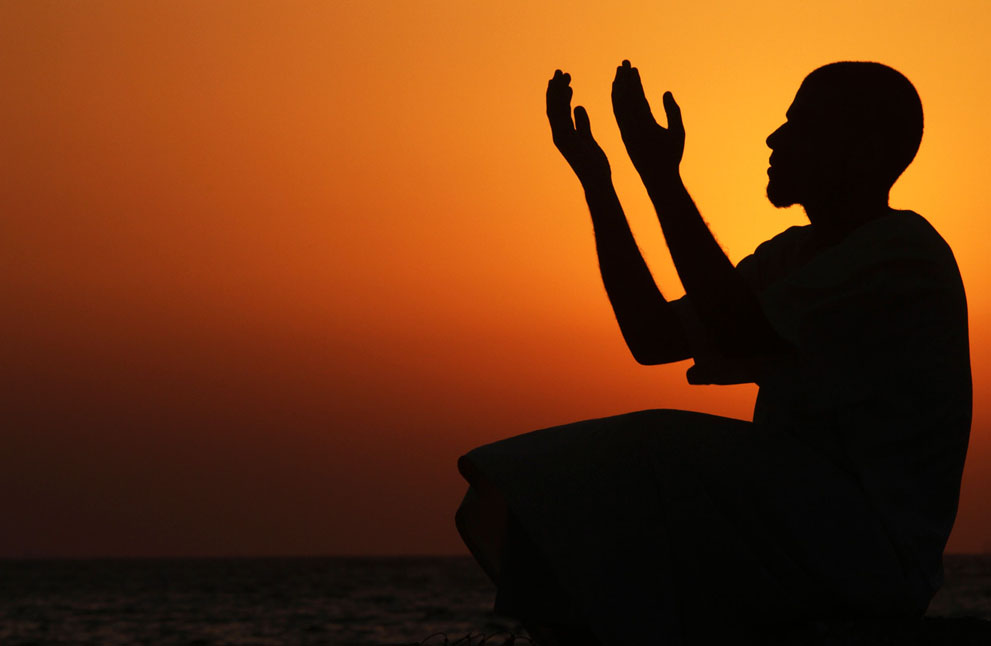 To the woman healed from disease, without any physical ministration whatsoever, Jesus simply said “thy faith hath made thee whole.” However, to the blind men, instead of simply healing them with his words, he actually spit in the dirt and covered their eyes with the mud before restoring sight. For the one who could calm a storm simply by raising his hand, applying makeshift clay to the face is a fairly odd and inconvenient process of healing someone. James E. Talmage gives us this great insight:

“In no case can such treatment be regarded as medicinal or therapeutic… It is conceivable that confidence, which is a stepping-stone to belief, as that in turn is to faith, may have been encouraged by these physical ministrations, strengthened, and advanced to a higher and more abiding trust in Christ, on the part of the afflicted who had not sight to look upon the Master’s face and derive inspiration therefrom, nor hearing to hear His uplifting words. There is apparent not alone an entire absence of formula and formalism in His ministration, but a lack of uniformity of procedure quite as impressive.” Jesus the Christ, pg. 320-321

In another account, a blind man was also instructed to wash himself in a nearby river to complete the healing process. Same miracle. Different procedure. Lack of uniformity.

If healing is indeed an ordinance, it’s one that’s not contingent on specific language or procedure. The power to heal is only dependent on the exact wording of the prayer to the extent that the perfect recitation acts as a stepping-stone to confidence and actionable faith to those involved, similar to putting clay on the face or washing in a river.

As mortals, we often need tangible, material things, which act as crutches to prop up our faith. Our bottles of consecrated oil don’t really contain healing power. But the oil is a tangible token in which we place our faith, which does have power. Similarly, Joseph Smith’s seer stone was just a worthless rock he found in a ditch. But because he believed in it, it became a portal to receive heavenly messages. As he matured, he stopped using the seer stone since he was, we believe, experienced enough to access heaven without it. And as a case in point, the new LDS Topics essay on the Book of Abraham attempts to alleviate any concern of those muddling through the reality of the documentary evidence by asserting that “the physical artifacts provided an occasion for meditation, reflection, and revelation. They catalyzed a process…”

Likewise, ordinances are more about stepping up our own spirituality, confidence, and pointing us in the right direction than they are Godly checkboxes. The real conversion and the real manifestation of our righteousness is how we treat those covenants and commitments throughout our lives, not the ordinances themselves. The parable of the talents comes to mind – what we have pales in comparison to what we actually do with whatever it is that we have. Our covenants and ordinances wouldn’t mean very much if we didn’t endeavor to live by them. The more meaningful destination of a temple marriage, for example, is not the actual ceremony, but the years of growing together to “become one” and by doing so, ultimately increasing our capacity for love and selflessness.

My bishop once told me everything in the temple was symbolic and “designed to teach principles.” Temple marriage, then, is designed to teach principles which lead to the state of being “sealed” or “unified” as one. Some people take the ordinance as literally binding. My experience is that this sealing “catalyze[s] a process” of binding, a process which lasts a lifetime and isn’t dependent on who initiates that process. Regardless of time and place, virtue still cleaves to virtue, according to Mormonism, and the same sociality exists between us here as exists on the other side. The ordinance is what we hang our hopes on while we struggle through life learning to be charitable and virtuous.

A sealing, therefore, is a physical representation of something that is truly in our heart. I don’t believe that a couple that has been sealed in the temple but then lacks mutual respect, or actively harms one another, is truly sealed in the hereafter. It follows that a couple that does have mutual respect and love are cleaving unto one another and forming a bond (a sealing) that ought to continue in the hereafter. To borrow from and admittedly manipulate the well-known passage in James “a sealing without works is dead.” Elder Oaks tells us flat out:

“It is not enough for anyone just to go through the motions. The commandments, ordinances, and covenants of the gospel are not a list of deposits required to be made in some heavenly account. The gospel of Jesus Christ is a plan that shows us how to become what our Heavenly Father desires us to become.” – The Challenge to Become, Oct. 2000

So can people become what Heavenly Father “desires them to become” through ordinances that aren’t found in Mormonism? I hope so. It’s difficult to fathom the sheer number of people the Lord would be excluding from exaltation of the highest order simply because they turned their hearts to the Lord or dedicated their lives to Him in the wrong building, or in the wrong century, for that matter. 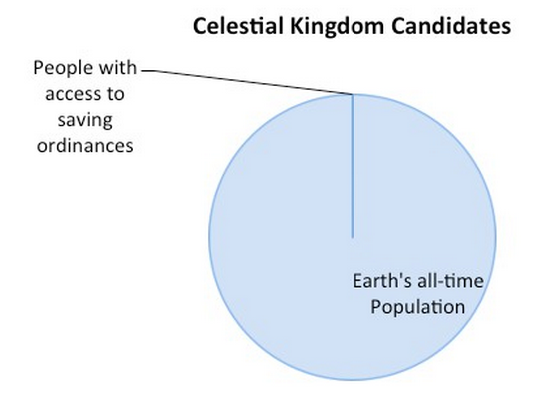 There simply has to be something outside of our everyday Mormon paradigm. Terryl Givens gives us this glimmer of hope:

“It grows increasingly difficult to imagine that a body of a few million, in a world of seven billion, can really be God’s only chosen people, heirs of salvation…We would do well to note what the Lord said to Joseph in section 49, when he referred to “holy men,” that Joseph knew nothing about, and whom the Lord had reserved unto himself. Clearly, Mormons don’t have a monopoly on righteousness, truth, or God’s approbation. Here and hereafter, a multitude of non-Mormons will constitute the Church of the Firstborn…The idea is certainly a generous one, and it seems suited to the weeping God of Enoch, the God who has set His heart upon us.” –Letter to a Doubter

I’m not downplaying our ordinances. I do believe, however, that our ordinances are most meaningful as helpers in our spiritual progression. We perform ordinances to elevate our commitment to God and to invite His Spirit into our realm. And to the extant somebody achieves that through Baptism, Mass, Torah Reading, Endowment, Eucharist, or Salat, I find it disingenuous to discount any particular method. Like the funerary scrolls Joseph used for the Book of Abraham, these experiences cause us to “reflect, meditate, [and] catalyze a process.”

Elder B. H. Roberts reminds us that the Lord uses more than one institution to reach his children:

“While the Church of Jesus Christ of Latter-day Saints is established for the instruction of men; and it is one of God’s instrumentalities for making known the truth yet he is not limited to that institution for such purposes, neither in time nor place. God raises up wise men and prophets here and there among all the children of men, of their own tongue and nationality, speaking to them through means that they can comprehend. … All the great teachers are servants of God; among all nations and in all ages. They are inspired men, appointed to instruct God’s children according to the conditions in the midst of which he finds them.” -Defense of the Faith and the Saints (Salt Lake City: Deseret News, 1907), 1:512-14

If we look closely, we see that even the Book of Mormon leaves out everything beyond baptism, including the priesthood, temples, eternal families, and the pre-existence. Essentially everything that makes Mormonism unique is left out of the book containing the “Fullness of the Gospel.” Could the actual fullness of the Gospel then, be considered the central message of Christ and the teachings attributed to him? Is everything else simply meant to point us in the right direction?

I posit that baptism, for example, is robbed of its true beauty when we excessively talk about washing away sins instead of the symbolism of a spiritual commitment to God. We miss the mark and suck it dry of meaning when we talk about it as a requirement for the Celestial Kingdom and have two witnesses make sure the person went all the way under. If children can’t sin before the age of accountability, what sins are we washing away when they turn eight anyway? The reality is God can forgive our sins without baptism, as he did both Joseph of Palmyra and Saul of Tarsus. And in Jerusalem, simply seeing people’s faith was enough for Jesus to declare “thy sins are forgiven thee.” Baptism therefore becomes another physical ministration that helps us place confidence in the atonement and strive to lead a more Christ-like life. It points us in the right direction and deposits a memory to draw strength from throughout our lives. Is that not beautiful enough?

Some, of course, still thrive on the structure, hierarchical order, and well-defined rules which provide comfort, security, and a standardized yard stick to measure personal righteousness. While I understand the value in this, I find Jesus’s example illuminating – he replaced the structure of the day with the simpler beatitudes. Enforcing them is difficult since they aren’t bright line rules. Rather, they are philosophy based in love and empathy – they weren’t meant to be enforced. They were meant to be taught and lived. As a result, they impart little guilt.

Finally, our ultimate reward isn’t tied to clear, objective rules since God is the ultimate Judge and each person, we’re taught, is represented by Jesus, the mediator who argues for mercy to whatever extent possible. In the end, religious affiliation in mortality doesn’t really mean much in the determination of reward and punishment. And God certainly knows whether we’re being honest and authentic within our sphere of understanding. God wants to reach us, no matter how many religions it takes.

“If all experienced God in the same way and returned Him an identical worship, the song of the Church triumphant would have no symphony, it would be like an orchestra in which all the instruments played the same note. Aristotle has told us that a city is a unity of unlikes, and St. Paul that a body is a unity of different members. Heaven is a city, and a body, because the blessed remain eternally different: a society, because each has something to tell all others– fresh and ever fresh news of the ‘My God’ whom each finds in Him whom all praise as ‘Our God.’” -C.S. Lewis