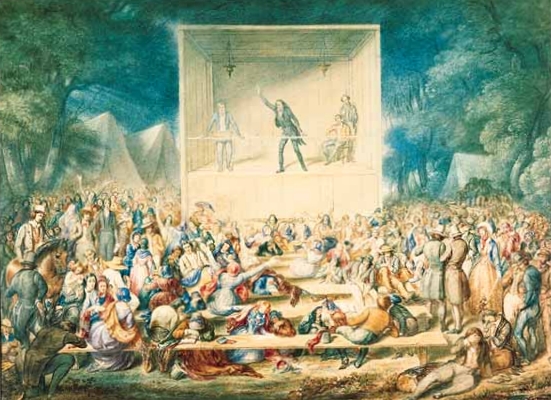 Growing up Baptist in the Southern Bible Belt, I was constantly faced with one critical question: Are you saved? I could not escape that question, whether in church or at Christian school. And it was a matter of your eternal destiny: heaven or hell.

The problem with me, though, is I never knew for sure I was “saved” and could not answer that question definitively. For the longest time, I feared I was not. When I was six years old, I knelt down and asked Jesus “into my heart” as we were taught in Christian school. But despite this “classic” salvation experience prayer, I never felt saved. As I got older, I didn’t know what was wrong with me.

And here is the catch: once you are “saved,” you have arrived and on your way to heaven. There is very little room to speak of eternal progression. There remains a saying in Baptist circles: “once saved always saved” (see John 10:28).  But what does that really mean?

There is practice in evangelical circles known as the “altar call” where the pastor calls people to the front of the church to receive Christ and “get saved” (think: Billy Graham crusades). And every church meeting, youth conference or Christian concert would have an altar call. Once my youth pastor gave an altar call on the church bus before leaving on a youth trip! I could not get away from it, and I could not get away from that question. And it was something you just “knew.”

But the problem with me was I didn’t know. And despite that early “salvation” experience, I doubted it constantly.

Like me growing up in the Southern Bible Belt, Joseph Smith experienced something similar during the revivalistic fervor that characterized his youth. Smith describes the clergy of his time as eagerly “active in getting up and promoting this extraordinary scene of religious feeling, in order to have everybody converted” (Joseph Smith History 1:6). He was also plagued with this same question: Are you saved? Acting in the wisdom of James 1:5, he prayed for answers. And the rest is history.

Last year, after a long period of soul searching, I made sacred covenants in the Columbia, South Carolina Temple. Ironically, this was in the same city where I wanted to go to Bible college as a teenager because my youth pastor had went there at the time and I thought it was “God’s will” for my life. But what does a 17-year old really know?

I did not go to Bible college; rather, my educational journey took an entirely different course that I did not expect, and my theological training was antithetical to everything I had been taught in church and Christian school. And then somehow in the process, I became a Mormon. But it was in that Temple Endowment ceremony on December 29, 2018 – in the same city where I had wanted to go to Bible college so long ago – that I gained the “born again” feeling I had never experienced before.

Several days after my Temple Endowment, my eyes fell upon Mosiah 5:7, “And now, because of the covenant which ye have made ye shall be called the children of Christ, his sons and his daughters; for behold this day, he hath spiritually begotten you…” (I consider this the John 3:16 of the Book of Mormon!). In that moment, I just knew. And there was no denying the sacred covenants I made in the Temple or their intended meaning. I finally felt “saved”!

But that is not all. For the longest time, I did not know what to do about my childhood “salvation experience.” Did it really count? If so, what did it mean? Again, I never had this question answered, so I just set the question aside.

Recently I was reading in my Patriarchal Blessing, and as often happens, I stumbled upon a line I had read many times, but had never really paid much attention to. As it turns out, that first experience is alluded to there in almost the same, exact wording it was presented to us as children: “You are blessed to have the seed of truth of the gospel planted in your heart.” Did I not ask Jesus to come “into my heart” at a young age?

This moment brought closure for me, in the sense that I finally realized that salvation is a process, not a moment. Now, eternal progression and becoming like Heavenly Mother (attaining eventual goddess-hood) remain the goal of my new birth.