Death and the Sacrament 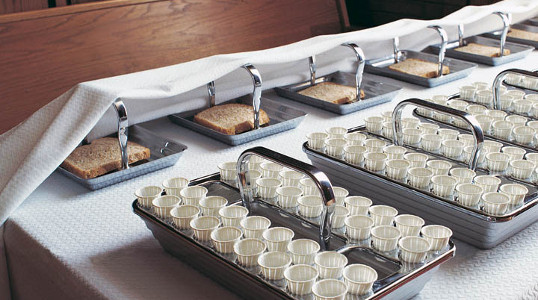 The year my brother turned 12, my dad received permission to ordain him to the Aaronic priesthood while we were visiting family in Utah. As a sixteen year old priest, this was my first time participating in an ordination. This was also the first time that a member of my immediate family had been ordained with my grandfather, uncles, and cousins participating, surrounded by aunts and more cousins. I remember joining in the ordination on my grandparent’s lawn, on the Fourth of July, and feeling that everything was just as it should be.

Two days later, on Saturday, my grandfather gave us news that everything was not “as it should be.” He had recently learned that his heart was ready to give out. His doctor suggested that he had six months to live. Though his health had been deteriorating for years, the short timeline caught everyone off-guard. As a young man who had never lost someone so close, I couldn’t fully appreciate what it meant. Instead, I focused on the fun to be had with my large group of cousins and tried to put the news out of my mind.

By Sunday, my cousins had all gone home. In my grandparents’ ward, most of the young men were away at a scouting event. My brother and I were invited to help with the sacrament. I hastily gave him tips for passing the sacrament. Then I helped administer the ordinance while he joined in passing the bread and water. It was a first for him, it was a first for us working together in our priesthood roles, and it was extra special to be doing this for my grandparents. They were so proud of us in that way that only grandparents can express. Looking back, I’m sure Saturday’s news made the moment more poignant for them. But I thought only of the lucky timing which make this possible.

Early Monday morning my mother came to wake us up. On vacation it was unusual that she would do this without the smell of warm breakfast coming from the kitchen. Her explanation was direct: “Grandpa has had a heart attack. They are going to take him to the hospital, though it may be too late. Grandma and I are going with them. Wait here and I’ll call you with any news. Be sure to answer the phone.” Then off she went.

She had been out picking fresh raspberries with her parents when my grandpa began to feel unwell. He went back to the house for a glass of water and rest, a rare acknowledgment that me might possibly need to slow down. (On an earlier visit he had shown me one of his old, broken hip replacements, informed me that the doctor wouldn’t give him any more, and proudly proclaimed that “If I have to go, I’d rather wear out than rust out.”) After picking a few more berries, my grandma suggested to my mother that they check on him. As they turned a corner they found him lying alone in the grass, unmoving. It appeared that he had struggled up an embankment, decided to sit down on the grass, then laid down and died. I understand he actually looked quite peaceful He was lying only a few yards from where we had participated in that sacred ordinance five days earlier.

I know now that death can come at many times, for many reasons, and that it is easy for people, especially young people, to invent patterns or explanations that make sense of tragic events. We want these things to be neat and tidy, full of grand purpose. But even knowing that, I can’t avoid the spiritual feeling which came to me that Monday morning: that this timing was fortuitous, that my grandfather was given time to share that moment on Sunday when his grandchildren, worthy and prepared, administered the renewing covenants of the sacrament to their parents and grandparents. I will always be grateful to have been a part of those last ordinances he performed with his family. That sacred week forever transformed the meanings of family, priesthood, and sacrament in my life.

Rational Faiths is not-infrequently accused of being a less-than-faith-promoting. For me, it’s been the opposite. I love having a place where I can share (and read) a range of Mormon experiences, thoughts, feelings, and beliefs. When I criticize, it’s because I love the Church and want to see it grow closer to its Zion goal. With this post I wanted to share a bit of why I am forever bound to the Mormon way of viewing the world. I’d love to hear, in the comments, about any such moments or experiences you’d like to share, on the theory that even sometimes-doubters and critics can build faith.