The Rise of Post-Familialism: Humanity’s Future 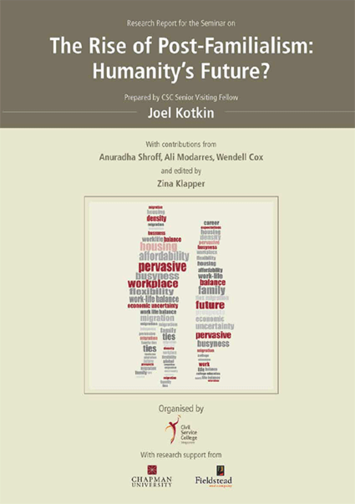 This orignally appeared in Newgeography.com.  We obtained permission from the authors to repost it here on our blog.

This piece is the introduction to a new report on post-familialism from Civil Service College in Singapore, Chapman University, and Fieldstead and Company and authored by Joel Kotkin. 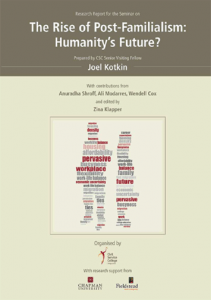 For most of human history, the family — defined by parents, children and extended kin — has stood as the central unit of society. In Europe, Asia, Africa and, later, the Americas and Oceania, people lived, and frequently worked, as family units.

Today, in the high-income world and even in some developing countries, we are witnessing a shift to a new social model. Increasingly, family no longer serves as the central organizing feature of society. An unprecedented number of individuals — approaching upwards of 30% in some Asian countries — are choosing to eschew child bearing altogether and, often, marriage as well.

The post-familial phenomena has been most evident in the high income world, notably in Europe, North America and, most particularly, wealthier parts of East Asia. Yet it has bloomed as well in many key emerging countries, including Brazil, Iran and a host of other Islamic countries.

The reasons for this shift are complex, and vary significantly in different countries and cultures. In some countries, particularly in East Asia, the nature of modern competitive capitalism often forces individuals to choose between career advancement and family formation. As a result, these economies are unwittingly setting into motion forces destructive to their future workforce, consumer base and long-term prosperity.

To be sure, many of the changes driving post-familialism also reflect positive aspects of human progress. The change in the role of women beyond sharply defined maternal roles represents one of the great accomplishments of modern times. Yet this trend also generates new pressures that have led some women to reject both child-bearing and marriage. Men are also adopting new attitudes that increasingly preclude marriage or fatherhood.

The great trek of people to cities represents one of the great triumphs of human progress, as fewer people are necessary to produce the basic necessities of food, fibre and energy. Yet the growth of urban density also tends to depress both fertility and marriage rates. The world’s emerging postfamilial culture has been largely spawned in the crowded pool of the large urban centres of North America, Europe and, most particularly, East Asia. It is also increasingly evident in the fast growing cities of developing countries in south Asia, North Africa, Iran and parts of the Middle East.

The current weak global economy, now in its fifth year, also threatens to further slow family formation. Child-rearing requires a strong hope that life will be better for the next generation. The rising cost of urban living, the declining number of well-paying jobs, and the onset of the global financial crisis has engendered growing pessimism in most countries, particularly in Europe and Japan, but also in the United States and some developing countries.

This report will look into both the roots and the future implications of the post-familial trend. As Austrian demographer Wolfgang Lutz has pointed out, the shift to an increasingly childless society creates “self-reinforcing mechanisms” that make childlessness, singleness, or one-child families increasingly predominant.2

Societal norms, which once almost mandated family formation, have begun to morph. The new norms are reinforced by cultural influences that tend to be concentrated in the very areas — dense urban centres — with the lowest percentages of married people and children. A majority of residences in Manhattan are for singles, while Washington D.C. has one of the highest percentages of women who do not live with children, some 70%. Similar trends can be seen in London, Paris, Tokyo and other cultural capitals.3

A society that is increasingly single and childless is likely to be more concerned with serving current needs than addressing the future oriented requirements of children. Since older people vote more than younger ones, and children have no say at all, political power could shift towards nonchildbearing people, at least in the short and medium term. We could tilt more into a ‘now’ society, geared towards consuming or recreating today, as opposed to nurturing and sacrificing for tomorrow.

The most obvious impact from post-familialism lies with demographic decline. It is already having a profound impact on fiscal stability in, for example, Japan and across southern Europe. With fewer workers contributing to cover pension costs,4 even successful places like Singapore will face this same crisis in the coming decade.5

A diminished labour force — and consumer base — also suggest slow economic growth and limit opportunities for business expansion. For one thing, younger people tend to drive technological change, and their absence from the workforce will slow innovation. And for many people, the basic motivation for hard work is underpinned by the need to support and nurture a family. Without a family to support, the very basis for the work ethos will have changed, perhaps irrevocably.

The team that composed this report — made up of people of various faiths, cultures, and outlooks — has concerns about the sustainability of a post-familial future. But we do not believe we can “turn back the clock” to the 1950s, as some social conservatives wish, or to some other imagined, idealised, time. Globalisation, urbanisation, the ascendancy of women, and changes in traditional sexual relations are with us, probably for the long run.

Seeking to secure a place for families requires us to move beyond nostalgia for a bygone era and focus on what is possible. Yet, in the end, we do not consider familialism to be doomed. Even in the midst of decreased fertility, we also see surprising, contradictory and hopeful trends. In Europe, Asia and America, most younger people still express the desire to have families, and often with more than one child. Amidst all the social change discussed above, there remains a basic desire for family that needs to be nurtured and supported by the wider society.

Our purpose here is not to judge people about their personal decision to forego marriage and children. Instead we seek to launch a discussion about how to carve out or maintain a place for families in the modern metropolis. In the process we must ask — with full comprehension of today’s prevailing trends — tough questions about our basic values and the nature of the cities we are now creating.

This report was organized by Civil Service College in Singapore with research support from Chapman University and Fieldstead and Company.

Joel Kotkin is executive editor of NewGeography.com and is a distinguished presidential fellow in urban futures at Chapman University, and contributing editor to the City Journal in New York. He is author of The City: A Global History. His newest book is The Next Hundred Million: America in 2050, released in February, 2010.

All posts by Joel Kotkin