The Restoration Movement, Blind Men, and the Unknowable Gospel 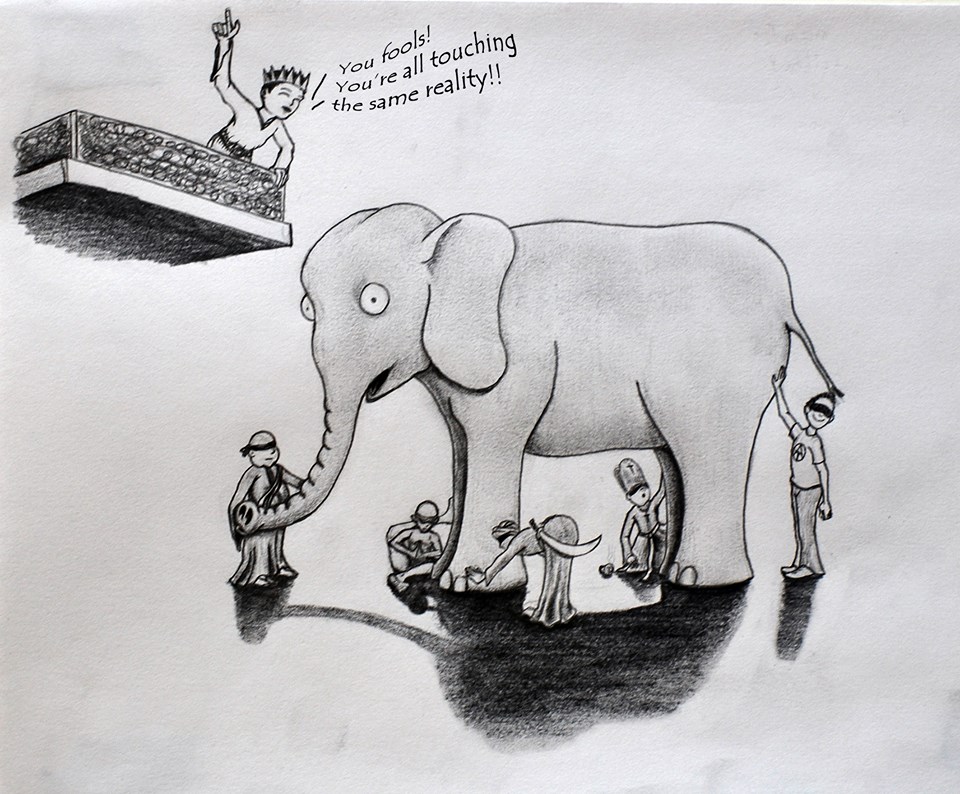 Before I begin this post, I want to relate the following parable called “The Blind Men and the Elephant.”
A number of disciples went to the Buddha and said, “Sir, there are living here in Savatthi many wandering hermits and scholars who indulge in constant dispute, some saying that the world is infinite and eternal and others that it is finite and not eternal, some saying that the soul dies with the body and others that it lives on forever, and so forth. What, Sir, would you say concerning them?”
The Buddha answered, “Once upon a time there was a certain raja who called to his servant and said, ‘Come, good fellow, go and gather together in one place all the men of Savatthi who were born blind… and show them an elephant.’ ‘Very good, sire,’ replied the servant, and he did as he was told. He said to the blind men assembled there, ‘Here is an elephant,’ and to one man he presented the head of the elephant, to another its ears, to another a tusk, to another the trunk, the foot, back, tail, and tuft of the tail, saying to each one that that was the elephant.
“When the blind men had felt the elephant, the raja went to each of them and said to each, ‘Well, blind man, have you seen the elephant? Tell me, what sort of thing is an elephant?’
“Thereupon the men who were presented with the head answered, ‘Sire, an elephant is like a pot.’ And the men who had observed the ear replied, ‘An elephant is like a winnowing basket.’ Those who had been presented with a tusk said it was a ploughshare. Those who knew only the trunk said it was a plough; others said the body was a grainery; the foot, a pillar; the back, a mortar; the tail, a pestle, the tuft of the tail, a brush.
“Then they began to quarrel, shouting, ‘Yes it is!’ ‘No, it is not!’ ‘An elephant is not that!’ ‘Yes, it’s like that!’ and so on, till they came to blows over the matter.
“Brethren, the raja was delighted with the scene.
“Just so are these preachers and scholars holding various views blind and unseeing…. In their ignorance they are by nature quarrelsome, wrangling, and disputatious, each maintaining reality is thus and thus.”
Then the Exalted One rendered this meaning by uttering this verse of uplift, “O how they cling and wrangle, some who claim. For preacher and monk the honored name! For, quarreling, each to his view they cling. Such folk see only one side of a thing.”

After the death of Joseph Smith in 1844, Mormonism broke into various pieces and its members became theologically (and geographically) scattered. For all disagreement on what direction the church should take, one thing was agreed up, Joseph Smith did indeed restore the gospel of Jesus Christ during his lifetime.

The restoration of the gospel of Jesus Christ is generally connected with one True church on the face of the church today. While that might have been the original intent of Joseph Smith, the problem with that idea is that churches, because they are run by imperfect people, have the ability to go astray. As Paul said, “As it is written, There is none righteous, no, not one” (Rom. 3:10 KJV). However, the gospel, because it is run by God, cannot go astray and is therefore bigger than any one church in the world. The gospel is the “good news” and that message of good news remains the same, whether or not a church chooses to proclaim that news.

The role of the church is simply to live the gospel/good news in the best way that it can, however imperfectly that might be, as they gather into Zion. A Zion people are a people of one heart and of one mind. Those people might come from various restoration churches and congregations, but “by their fruits ye shall know them” (Matt 7:20 KJV), if their primary message is to proclaim the love and peace of Jesus Christ as a people, then you will know they are God’s people, even if they are not in “your” church. Too often doctrinal differences get in the way of the real work of the gospel of Jesus Christ, proclaiming love and peace to the world.

The truthfulness of the gospel is too big for any one person, any one building, or any one church to claim for its own. The work is much too vast for that. Joseph Smith didn’t really restore a church, his church was simply a means to an end, he restored a movement, a covenant people. In 1832 Joseph Smith recorded that the church was “established in the last days for the restoration of his people . . . to stand upon Mount Zion” (LDS D&C 84:2; CofC D&C 83:1b)

Joseph Smith recorded in his 1838 history that,

“So great were the confusion and strife among the different denominations, that it was impossible for a person young as I was . . . to come to any certain conclusion who was right and who was wrong . . . In the midst of this war of words and tumult of opinions, I often said to myself: What is to be done? Who of all these parties are right; or, are they all wrong together?” (Joseph Smith-History 1:8, 10).

Change the phrase “different denominations” with “different restoration churches” and those of us within the greater Mormon movement today are in the same position as Joseph Smith, only instead of searching within Christianity generally, we are more specific in our search. Sticking with our pre-established dogmatic beliefs can be dangerous and the softening of those is what makes experiences like Joseph’s possible.

If we proclaim that one form of the restoration movement is completely true while asserting that another version of that movement is entirely false, then we become the ignorant blind man holding onto a trunk of a beast while calling it the whole elephant. The gospel is unknowable, to claim otherwise is the height of pride. “For my thoughts are not your thoughts, neither are your ways my ways, saith the Lord. For as the heavens are higher than the earth, so are my ways higher than your ways, and my thoughts than your thoughts” (Isa. 55:8-9 KJV). We usually tend to defend what is familiar to us, and not necessarily what is right or true. We believe what we are taught and we buy into the words from our hymns. But again, truth and God are bigger than we understand.

I am not calling on anyone to leave the path they are currently following, I am not asking you to deny all that you now believe. However, I am asking you to be patient with those in the restoration movement who might believe differently than you. Remember, they might be wrong, but then again, you might be wrong also. At best you both have partial truth, because none of us have all of the truth. At worst, you are both wrong and in need of further light and knowledge. Study as if you can know everything, while knowing that you never will. Know that the restoration was not an event in the past, but an ongoing revelation moving into the future. The restoration is not a thing, it is a community, we are the restoration, divided as churches we stand, and divided as churches we fall. Finally, let me echo the words of former Community of Christ President W. Grant McMurray,

“Be faithful to the spirit of the Restoration, mindful that it is a spirit of adventure, openness, and searching. Walk proudly and with a quickened step. Be a joyful people. Laugh and play and sing, embodying the hope and freedom of the gospel. Become a people of the Temple [and] . . . extend the hand of reconciliation” (CofC D&C 161:1b-2a).

May the churches of the restoration movement reconcile and restore friendly relations and again become one in Christ so together, we might stand upon Mount Zion and bring the world God’s truth. At the end of the day, aren’t we are all just blind people desperately clinging to what we love anyway?

Kirk Caudle completed his BA degree in the areas of Biblical Studies and History and completed his MA in Spiritual Traditions and Ethics. He is a former instructor of Religion at BYU-Idaho and guest instructor at the Portland Oregon LDS Institute of Religion. He created, and currently co-chairs, the Mormon Studies section of the PNW American Academy of Religion. He is published in The International Journal of Mormon Studies, presented papers at various academic conferences, and is the host of The Mormon Book Review Podcast. He currently resides with his family in Portland, OR.

All posts by Kirk Caudle