The Red Herring of Religious Freedom

In light of the news that the LDS Church has shifted gears in its opposition to marriage equality it has also given heightened attention to the promotion of religious freedom. This was emphasized in a letter dated September 15, 2013 from the Hawaii Stake Presidency to church members about the upcoming vote to legalize marriage equality in that state:

“We have received a number of questions in the last few months regarding proposed legislation that would redefine the relationship and nature of marriage in Hawaii.

“As members of the Church we should be actively engaged in worthy causes that will affect our communities and our families. This legislation will directly affect both. Members are encouraged to study this legislation prayerfully and then as private citizens contact your elected representatives in the Hawaii Legislature to express your views about the legislation. As you do so, you may want to review “The Family: A Proclamation to the World” and other Church publications available on the Church website at lds.org.You may also wish to consider donating your time or resources to one of the community organizations addressing this issue.

“Whether or not you favor the proposed change, we hope that you will urge your elected representatives to include in any such legislation a strong exemption for people and organizations of faith. Such an exemption should:

“ — Protect individuals and small businesses from being required to assist in promoting or celebrating same-sex marriages.

“This is an important issue. As your stake presidency, we urge every family to discuss this issue together and then respond as you feel appropriate. Thank you for your support and faithful service. We pray that the Lord will bless and protect you and your families always.”

This is a remarkable shift from the hardline stance the church took during the Proposition 8 campaign in California. Gone are the commands to donate time and means to opposing the law and instead church members are instructed to express their views. While the read-between-the-lines is still implicit with the mention of reviewing the Proclamation it is still striking to see a much more nuanced position issued by church leadership.

The other striking part of the letter is the emphasis on religious freedom. While the church and its leaders have been promoting the idea of religious freedom for decades the recent emphasis combined with the shift on its rhetoric on marriage equality serve as both a beacon of change and a shadow of a shameful past. 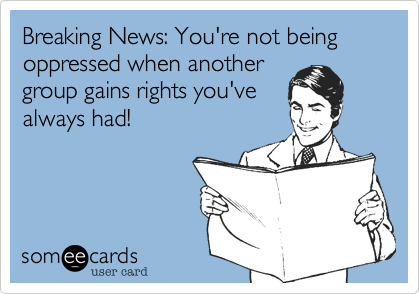 We have a poor institutional track record towards civil rights. The church’s current position towards marriage equality is roughly analogous to its position on civil rights in the early 1960’s. At that time we had come from an era in the 1950’s where the church quietly worked to defeat civil rights legislation in Arizona, had the Relief Society pressure the National Organization of Women to avoid supporting equal rights, had members of the First Presidency strongly opposing John F. Kennedy’s civil rights legislation because “it takes away a man’s right to contract, and to do business. […] there is no such power given to the Federal Government by the Constitution,”  and had members of the Quorum of the Twelve saying that “the civil right’s movement in the South had been ‘fomented almost entirely by the communists,” was “phony,” and that “the Lord segregated the Negro and who is man to change that segregation?”(1)

These statements parallel remarks offered by many church leaders in the 60’s, 70’s and 80’s  about homosexuality equating it to a “disease” that could be “cured.”

By 1963 when President Kennedy invited religious leaders to the White House to increase support for his proposed civil rights legislation, President David O. McKay sent James E. Faust (then a Stake President) in his place and told him the following:

“I told Brother Faust that he should go and find out what President Kennedy is trying to do. I said that I did not like to see a law passed which will make the Hotel men violators of the law if they refuse to provide accommodations for a negro when their hotels are filled with white people, or restaurant men made violators when they decline to serve colored people. I said that businessmen ought to be free to run their own businesses, and not become law breakers if they choose to employ certain people; that if we have such a law as that, then it is unfair to the majority of the citizens of this country.”(2)

We now have similar rhetoric coming from the church when it comes to religious liberty and the rights of small business owners and religious institutions as noted in the Hawaii letter above. This shift is best described by Charles Haynes:

“People on the left and on the right believe that same-sex marriage is inevitable; the momentum is all in that direction,” said Haynes, director of the Religious Freedom Education Project at the Newseum. “The best thing [believers] can do is to protect religious freedom — as they understand it — in this new reality.”

Whatever an owner’s personal beliefs, if a business opens its door to the public, Haynes said, it will not be able to withhold its services from gays.

As to whether churches themselves will be forced to perform or host same-sex weddings, Haynes said, “that will never happen until the First Amendment is repealed.”

The threat of such governmental coercion, he said, is “a red herring to frighten people.”

[…] “This is the freest society on Earth for religious people,” he said. “Protecting the rights of gay and lesbian people will not change that.”

The idea of a business using religious beliefs to not serve a black person should be as abhorrent as a restaurant not serving a gay couple. While the First Amendment may protect a religious institution from hiring a black person on the basis of their skin color, public opinion finds such an idea equally disgusting. May the day quickly come that we as a people rise above the prejudices of our day to see our gay and lesbian brothers and sisters for the children of God they truly are.

FOOTNOTES
1-David O. McKay and The Rise Of Modern Mormonism, 62-65

2-David O. McKay and The Rise Of Modern Mormonism, 68

Married to Carrie for 8 years they have 3 young children and are being watched over by twin boys. Jon currently serves in the Young Mens

All posts by Jon Marsh