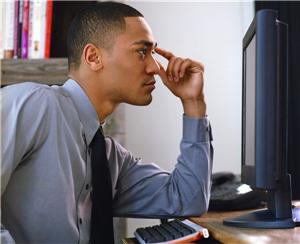 I caught up with an old friend of mine that has served as bishop many times in his life. While our conversation covered many subjects, the most interesting was the topic of repentance and an experience he had while counseling a young married couple. He remembered the exchange between the husband and wife vividly because it was just so odd to him. Now I want to now share that dialogue (the best that I can remember) and see what you think. (In an effort to make it more real, I turned the conversation into a video in addition to the transcript. Names, voices, and hairstyles have been changed to protect the privacy of those involved.)

Suzy: I remember you told me once that a friend gave you a magazine your freshman year in high school. Is that when it started?

Ralph: I don’t know precisely why, how, or when it started.

Suzy: But it was around the time you started high school, right?

Ralph: There are no clear insights as to when it started.

Ralph: Not before eighth grade, I guess.

Suzy: So it would be safe to say it all started in your early teen years?

Suzy: I know you don’t anymore, but you used to, right? So don’t you feel bad about it at all?

Ralph: Anything I said about it before was with limited understanding and without the light and knowledge that has now come into my world.

Suzy: So what you said about it helping our sex life was wrong?

Suzy: I’m so frustrated and upset! I feel like I’m going in circles here! Do you even feel bad about looking at it or not, Ralph? Please!

What a terrible conversation! Could you feel the frustration of the wife with her husband’s answers? Was there any admission of wrongdoing? Did you get the feeling that Suzy was questioning a person coached or aided by a lawyer? Did you want to punch Ralph in the neck meat during this whole conversation?

So what does any of this have to do with the new LDS 2013 scriptures?

In my last post we talked about the changes in the new edition of the scriptures. I found the new introduction to the Official Declaration 2 – the declaration that allowed blacks to get the priesthood – lacking some much-needed detail, to put it mildly. My beef was specifically with this part: “Early in its history, Church leaders stopped conferring the priesthood on black males of African descent. Church records offer no clear insights into the origins of this practice.” Some were satisfied with this introduction. Some were not, myself included. In the comments of my post there were several people who could not understand why I was making such a big deal over those two little sentences. And that is why I shared the above conversation between Ralph and Suzy. I needed to find something to parallel the new introduction that would be more relatable for the majority of the people reading this blog, because most of us can’t understand the genuine pain that those sentences hold. I feel like sometimes people are completely ignorant of the emotional impact those sentences have on an entire race of people because it’s just not personal for them. It doesn’t really register in their souls because, well, they’re probably not black and cannot sympathize, let alone empathize, with how serious and painful of a situation this was, and is, for so many. Anyway, I thought the new introduction to OD2, much like past explanations for the ban, were comparable to the above conversation between Ralph and Suzy. Can you see the parallels? Here are some samples from the racism spectrum so you can see what I mean (I bolded the similarities to make your life easier. You’re welcome.):

Statements against racism from the Church:

Mike Wallace: From 1830 to 1978, blacks could not become priests in the Mormon church. Right?

Gordon B. Hinckley: Because the leaders of the church at that time interpreted that doctrine that way. [cut]

Mike Wallace: Church policy had it that blacks had the mark of Cain. Brigham Young said, “Cain slew his brother, and the Lord put a mark upon him, which is the flat nose and black skin.”

Statements by the Church attempting to clear up the history of why the ban happened:

In the church’s statements, you can see that there has never been an apology or any admission of wrongdoing. It’s almost as if they are saying, “We can neither confirm nor deny any wrongdoing.” You can, however, see a strong condemnation of racism, perhaps to compensate for the lack of apology.

One of the problems with the statement “no clear insight into the origins of this practice” is that it leaves a big question mark. Even though we don’t know the exact meeting or the exact date when the ban came about, we do know a lot. For example, we know under what administration the ban began. So just using that knowledge, how about a statement like this: “The historical record makes it clear that racial prejudice affected American society generally as well as members of the Church, including leaders, at the time this practice originated, and that this practice grew out of said prejudice. Many incorrectly assumed that this racial prejudice was inspired by the Lord, which allowed the persistence of this practice until 1978, when it was overturned.” (Written by Derek Lee, RationalFaiths.com reader, not a lawyer.) This statement paints an excellent picture without throwing anyone under the bus. And I personally think an apology would be best offered during General Conference.

Another problem I see is that the Church’s nonspecific statements are repeated by its members. As you can see, the Church has already repeated this statement three times, the third making into our scriptures. So is this good history? Is this responsible history?

Lastly, the biggest issue is that these statements don’t respect the pain and trials our black brothers and sisters faced and, in some cases, still face. Remember, it was just in 2006 when then-prophet Gordon B. Hinckley spoke on racism. I’m sure that it’s probably hard to shake 100+ years of teaching racist doctrine, but I’m of the opinion that it’s even harder to shake when there is no admission of any wrongdoing or apology.

P.S.  The conversation with Ralph and Suzy was fake, but hopefully you already knew that.