“…The Opiate of the Masses…” 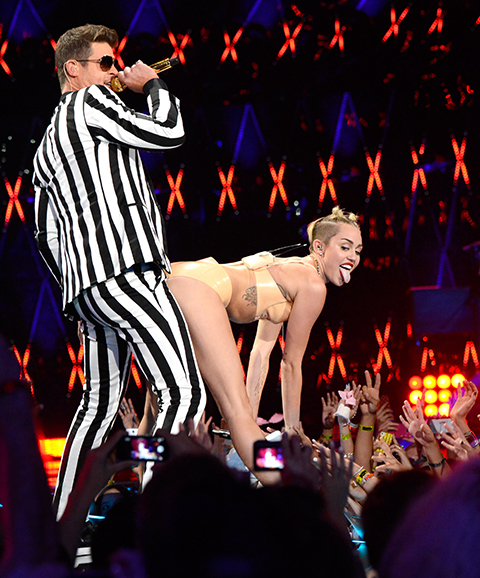 It has been translated various way, but most commonly is translated as:

“…Religion is the opium of the masses…”

Well, Brother Marx, I strongly disagree.  Now before all you atheists and agnostics get overheated, just sit down and read the rest of the post please. 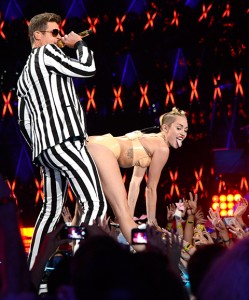 Mr. Thick and Hannah Montana at this past Sunday’s VMAs.

I think all of us are familiar with the Miley Cyrus/Robin Thicke shenanigan on the MTV Video Music Awards this past Sunday.   While most of the focus has been on Miley, the disgust of the whole thing should be shared squarley with Thicke as well.  He is frickin’ 36 years-old and Miley is only 21.  Come on now!!!

Regarding the song that the duo performed together, Robin Thicke had this to say:

“People say, ‘Hey, do you think this is degrading to women?’ I’m like, ‘Of course it is. What a pleasure it is to degrade a woman. I’ve never gotten to do that before. I’ve always respected women’”(source: The Wall Street Journal). 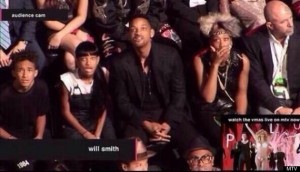 Jada and Will Smith’s family gasp at the lovely Thicke/Cyrus VMA routine.

Ok, I have a lot more words, but they all have four letters, and well, I am Mormon and I don’t talk like that.

The following day, CNN’s homepage had the Thicke/Cyrus fiasco as their top-story on their home page (click here to read The Onion’s great satire on CNN’s embarrassing decision).

I wonder if anything more important was going on during this time? Hmm…let me think…no wait…it’s coming I swear…

Michael Lotfi, the Persian-American political commentator and adviser had this observation:

“Meanwhile, during the same period of time [the twenty-four hours following the Thick/Cyrus VMA performance] the US military moved cruise missiles into position to strike Syria. The reason for doing so is because the Obama administration claims that the Syrian government has used chemical weapons against the Syrian people”(click here to read the entire article).

“I ran some analytics on Google just to see how the two compared. The results were shocking. On August 25th after Miley’sVMA performance her Google peak rating went from 67 to 100 in less than 24 hours… On August 25th the peak search value for chemical attacks in Syria actually fell to a value of 3, which is down from a value of 4 only 24 hours earlier. The term “Syria” is valued at 56- averaging flat over the past few days (Update 1).”

This past Tuesday I was in the break room at work chatting with a friend.  As I sat at a table full of magazines such as Us Weekly, People Magazine, and other mind-rotting throw-aways, I asked my friend if he had heard about Robin Thicke and Miley Cyrus and what they did at the MTV Video Music Awards.  He responded, “Do I want to?”  I showed him the above picture of the dynamic duo and then this meme that had been shared by one of our permabloggers: 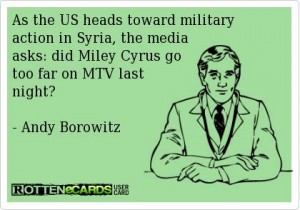 He then said, “Karl Marx was wrong.   Religion is not the opium of the masses.  This crap is.  Trashy entertainment is the opiate.  This stuff just distracts us from the important issues.”

I have to agree with my friend.  Karl, you were wrong.

Special thanks to all the permabloggers at Rational Faiths for helping me put together this post.