THE MORMON TABERNACLE CHOIR AND MY EUROPEAN MORMON TRADITION 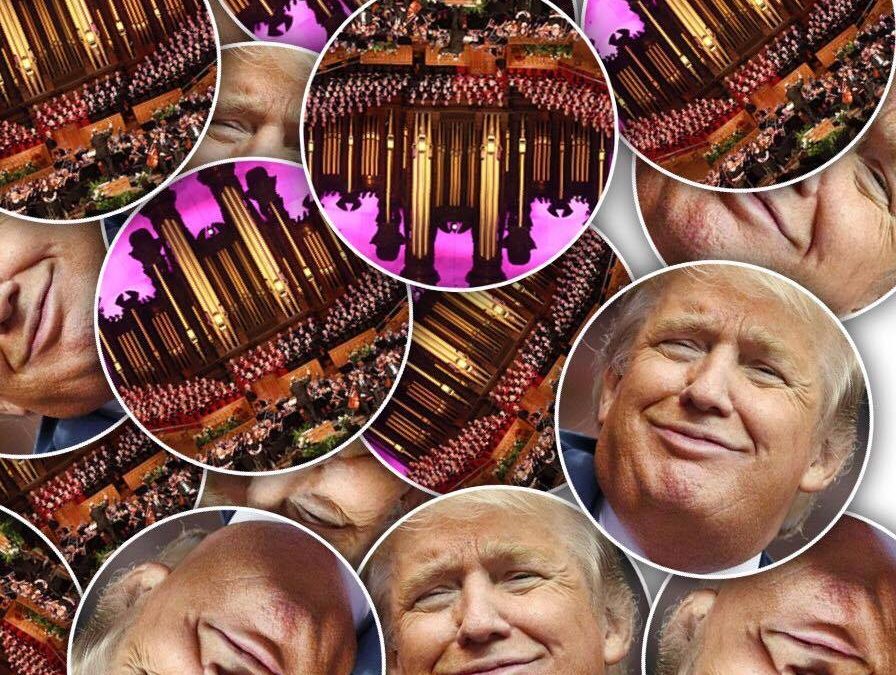 “Like one who seeks to warn the city of an impending flood, but speaks
another language. They do not understand him…
“So do we come forward and report that evil has been done us.”

“I can throw a knife at you and then tell you whether it hurts”:
A note on the treatment of dissent within Mormon discourse.

My nightmares almost always involve an inability to communicate danger, an inability to act in defence against hurt. I try to cry out but my mouth is clamped shut. I try to run but my feet are glued to the floor. It is my enforced passivity that makes these dream-worlds so terrifying. The words, the movements don’t come. My intentions fall, lifeless, to hard ground. I am restrained, contained and vulnerable.

I am beside, outside myself. Not only am I hurt, but I experience the harm in third person – I watch, horrified but impotent. I can do nothing – and nor can anyone else. My voice has been muted. Unheard and unseen, my pain does not exist. I don’t exist.

You know that large and spacious building I was telling you about? You’ve only gone and gotten yourselves a gig there. Ah well, death of the author and all that, I guess. (God, December 2k16)

Let me begin by stating the obvious about the most recent Mormon controversy to have surfaced into public secular awareness. The commentary that follows is the product of exchanges I have had with members who support the existing plans of “America’s Choir”; it is offered with this “faithful” perspective firmly in mind.

It’s hardly a novel idea within Mormonism that the people and organisations with whom we choose to associate is a matter of moral and religious significance. There is nothing neutral about the decision to perform at Trump’s inauguration. The Mormon Tabernacle Choir is not a mere service provider, available for hire: like it or not, it represents us. My Grandma was a convert to the Church; her first contact with the latter-day saints was Music and the Spoken Word. But, while there is such a thing as bad publicity, this is at bottom a question of integrity. As a Mormon-raised European I have grown tired of this cultural embrace of corporate heterosexist racist America; I am tired of this being the international face of my family’s religious tradition (a tradition that, as it happens, has been a source of strength and empowerment as my family have been dragged through sustained illness and poverty). I feel merely an extension of the betrayal I felt waking up to discover the not insignificant contribution of predominantly Mormon states to Trump’s victory.

Perhaps the decision to perform is, as some members have suggested, an expression of nothing more than patriotism and an earnest reverence for good ol’ All-American democracy and freedom. I suppose your love of (the idea of) your country does seem to have been historically tied up with a cult of presidential personality – at least to a casual, largely ignorant observer like myself. This is a patriotism so rotten that the Church has no place so blatantly and uncritically aligning itself with it. It has no place courting the wealthy and the powerful. We cannot let them call our tune. There is no honour in appeasing the privileged.

Of late I have increasingly refrained from articulating my views on matters such as these in even pseudo-public domains – largely because I have a finite reserve of the sort of emotional energy required to withstand the usual flood of knee-jerk apologism. And, having fallen out of love with my religious heritage, my voice is deemed, by most members who recognise it, to be irrelevant and thus intrusive at best – malicious at worst. “I am an anti-Christ; I am an anar-chist.” Apparently.

I mean, it does have that nightmarish absurdity to it – enough to drive one crazy. And there’s a concrete sense in which it did.

So, this is NOT another bloggernacle hot take on the MoTab/Trump scandal, you’ll be relieved to hear. I want to say something about this phenomenon of hot and ever-hotter takes on how everything is really absolutely fine, and how the hands and hearts of everyone involved are respectively clean and pure.

If your primary commitment is to support **every single decision** taken at Church headquarters, or indeed by any organisation with links to the Church, then I’m afraid you’ll sooner or later be compelled to call evil good, and good evil, to put bitter for sweet and sweet for bitter (2 Ne. 15:20), such that any justification will do. Your uplifted hand is immovable in the face of any (even doctrinal) counter-argument, any expression of personal hurt, any carefully substantiated talk of oppression or systematic harm. Because, ultimately, you are not particularly attached to the content of the given justification you provide for the controversy at hand. Such justifications have only instrumental value for their proponents – namely, to perform the absolute conviction that The Church, The Brethren – whatever mysterious definite description you prefer to asign to that amorphous yet no-less-than-inspired entity that commands the sustaining vote of each and every one of us – knows and wills best. Let’s spin the apologetic wheel to answer why…Kate Kelly was excommunicated in absentia…gay civil marriage has been made an excommunicable transgression, and, their children, um…

The explanation itself doesn’t matter, just as long as there is one, and it does, however superficially or cursorily, explain away dissent, hurt, confusion – doubt, even.

We may see through a glass darkly, but we all know deep down that, well, what’s on the other side is really, um, nothing to worry about, nothing to worry about at all!, and, what’s more, it’s not very well our business worrying ourselves silly – and certainly not to worry out loud. Never mind that loudly!! My, what an overreaction! Ha ha, we don’t care, we’re not scared!

Then again, maybe we just prefer not knowing.

This performance of fidelity, this communal back-patting, is by no means a distinctly Mormon activity – but we sure are good at it. This is not what faith looks like. I guess this is our ritualised Pledge of Allegiance – our sorting of wheat from seditious chaff. It is not faith but a feverish fear of dissent. It’s a travesty of religion.

I find no comfort, no safety in comformity to hegemony. Because there is no place for me and others like me within this ritual and what it represents. There are people who will be unable to *exist* in Trump’s America. There are people who are unable to *exist* in the institutional Church. Your complacency is actively harmful. Squeeze your eyes shut, plug your fingers in your ears, and the marginalised, the down-trodden, the heavy-laden – they disappear. Their calls, their motions: they simply aren’t.

To finish, the response of a Relief Society teacher (some months ago now) to my poorly concealed bafflement-cum-despair at a prolonged class discussion of how lucky we are to have wise old (white) men at the helm of Christ’s church:

“I can understand why, at your age, you might feel this way. But as you grow older, you will realise that ultimately, you have no say in how the Church is run.

There it was. There was the knife. But nobody could see, nobody could hear me hurting. A few quizzical faces turned back to get a better look; some awkward shifting in the pews; nothing more. I didn’t cry out. No scene was made. I could only stare back at her, at them all, in disbelief, my lungs filling drop by drop with long-accumulated godly sorrow, punctuated by that familiar tug on a hopeless heart. I was suspended in the silence of the teacher looking to me expectantly for assent, for a resolution I couldn’t offer.

Emily is a UK philosophy undergraduate and an aspiring writer and teacher. Her favourite writers include Virginia Woolf, bell hooks, Iris Marion Young, Angela Davis, Sylvia Plath and James Baldwin. With family roots in Yorkshire and the North East of England, she is the oldest of five children and a third generation Mormon. She enjoys playing the piano, higher education activism, film-making, choral singing, and football.

All posts by Emily Goldman