The Miracle of Christmas through My Son’s Eyes 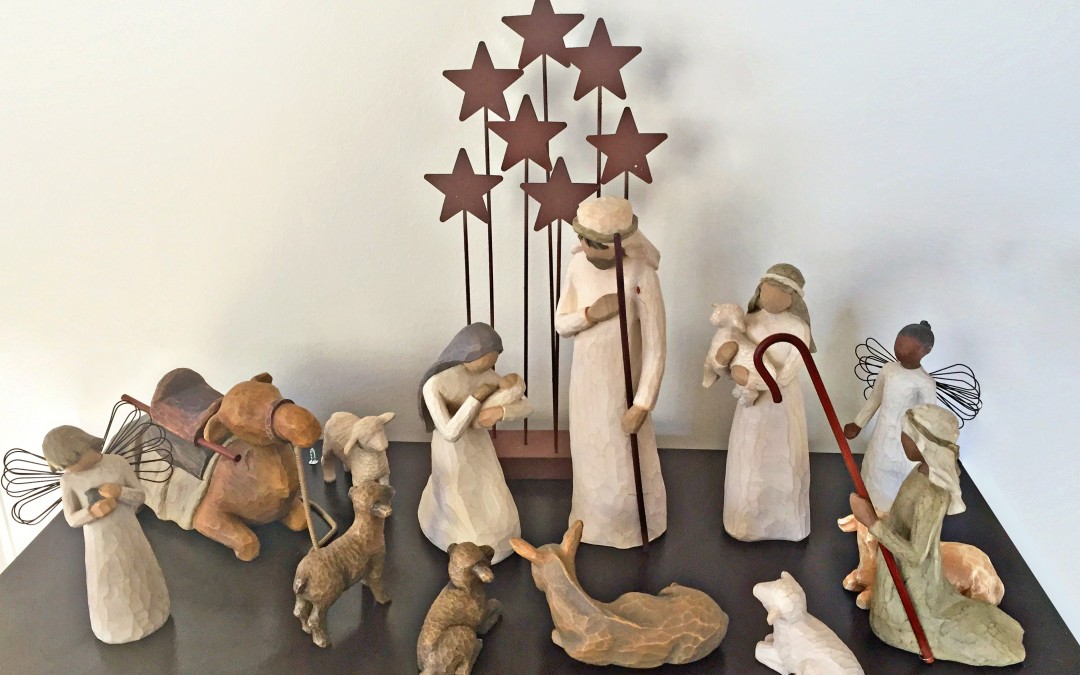 It began with my nativity set, given to me a few pieces at a time by my mother-in-law.

The reason for that gift goes back to my childhood. Our Christmas Eve tradition centered around a ceramic nativity set. While my father read the story from the New Testament, my three brothers and I would move the oft-repaired pieces around a felt cloth, reenacting each element of the story. My favorite piece was the angel. I rigorously defended a birthright claim to the angel, which appeared in every scene by my interpretation.

This year my son, age 3-going-on-12, responded to the nativity set with great interest. He’s always been delighted by babies – and recently (falsely) convinced everyone at school that we were expecting a little sister, “already in mommy’s tummy” – so I wasn’t surprised by his enthusiasm. The image of Our Savior as an infant is perfect for him. But he also developed an obsession with the angel that made this father proud (even when it resulted in broken wings, the universal condition of all nativity angels).

That night, instead of our usual reading routine, I offered to tell the story of Christmas. He was enraptured by the angelic visits to Mary and Joseph, the journey to Bethlehem, and the need to shelter in a stable with animals. Mostly, it was an action story about one of his favorite characters. But when I got to the shepherds and pronounced that wonderful message,

Fear not: for, behold, I bring you good tidings of great joy, which shall be to all people.
For unto you is born this day in the city of David Saviour, which is Christ the Lord’

I found myself tearing up. Those lines always remind me of the angelic salutation to King Benjamin, the universal answer to the mortal state of man, that through grace represented by a helpless infant we all – helpless ourselves – can be made pure.

The next night my son wanted more stories about Baby Jesus. So we turned to the Americas. I told him about Samuel (he liked the part on the wall but was impatient for Jesus) and the prophecy. I was thrilled at the idea of a night without darkness and informed me that it was not just from the stars but because of all the angels. I like his idea of divine, heavenly radiance filling the sky. I told him about the threats to the believers and Nephi’s earnest, prayerful plea. And, again, I found myself tearing up as I shared the response.

Lift up your head and be of good cheer; for behold, the time is at hand, and on this night shall the sign be given, and on the morrow come I into the world.

We sat together contemplating what that brilliant night must have felt like for those granted physical salvation by the birth of the universal Savior.

But my son isn’t content to let the nativity be a far away and long ago story. He loves Jesus too much. So he’s inserted himself into key parts of the story. A boy obsessed with pirates and knights and superheroes declares his presence at key stages of the nativity in the role of defender of the oppressed.

Looking at a picture of the flight into Egypt in our chapel foyer, he told me on Sunday, “Did you know I was there. They cut it off, but I was right there by Joseph to protect them,” he said, pointing just to the left of the frame and explaining that he carried a sword to defend them from danger.

Whenever I tell the story in 3 Nephi 1 he tells me that he was there with a sword to protect the believers. With the innocence of one who still believes there are two kinds of people in the world, he proposes to “kill the bad guys for them.”

“I was there” he says of the flight from Herod.

“I was there” he says of the night before the birth in the Americas.

While I’ve been providing the details, my son’s been providing the vision. It’s a vision of a Christmas centered on grace and infancy, of skies so full of angels that no darkness can be seen, of an ongoing miracle in which we all have a role, and of standing beside the oppressed to shield and protect the sacred.

Though my son is excited about presents and Santa (and has sat in his lap three times already), I know this Christmas we’ll also be celebrating Jesus’ birthday, even if one of us does so armed with a sword.