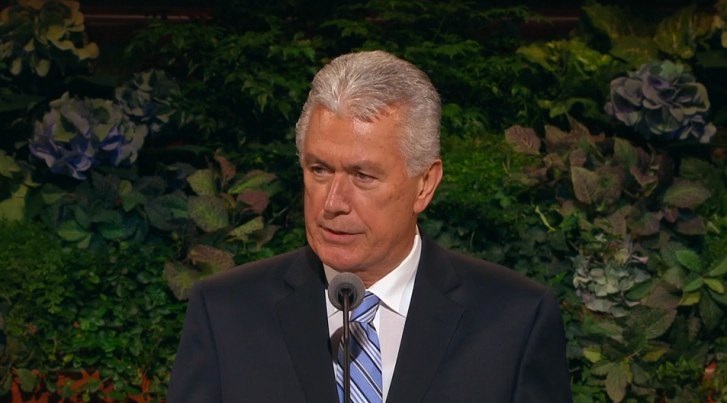 Every now and again, you hear a talk at conference that you feel like addresses you, your life, and your specific concerns.  Yesterday, Elder Dieter F. Uchtdorf’s talk had many of us standing and clapping (figuratively, of course, conference is a reverent event).  There was so much addressed in his talk that we found important, that here at Rational Faiths we’ve decided to break down specific points for a series of posts.

For my part, I’ll be discussing the implications he made about the Church’s troubling past and the imperfectness of its leaders.

He began this section of his talk by validating those of us who are aware of troubling parts in our Church history, “Some struggle with unanswered questions about things that happened in the past. We openly acknowledge that in nearly 200 years of church history, along with an uninterrupted line of inspired, honorable and divine events, there have been some things said and done that could cause people to question.”*

The idea that there is an “open acknowledgement” here is quite a relief.  I feel like we’ve been taught a watered down, sunshined up version of Church history so thoroughly and for so long, that some of us might start to feel like we are the crazy ones when presenting facts that aren’t included in church manuals and don’t fit in with the glorified version of church history.  Here Uchtdorf not only recognizes those of us who question, but is optimistic in our behalf: “Sometimes questions arise because we don’t have all the information and we just need a bit more patience. When the entire truth is eventually known things that didn’t make sense to us before will be resolved to our satisfaction.” When studying history there is always going to be a problem with historical context and perspective, and shaking out the reality with the sources that we have can be troubling.  Uchtdorf seems confident that, one day, when it is all settled, we will be happy with what we know.  I feel less confident than he does, but I am just excited he’s bringing it up.

He also addressed the facts we do have, “Sometimes there is a difference of opinion as to what the facts really mean.  A question that creates doubt in some can, after careful investigation, build faith in others.”  This to me was both a validation and admonition.  As though he were saying, “You may have found something that troubles you, but please take the time to study it out; it may not be the problem you think it is.”

But then comes the good part, the part wherein he acknowledges that we may come across things in church history that we will never feel really good about. “And to be perfectly frank, there have been times when members or leaders in the church have simply made mistakes.  There may have been things said or done that were not in harmony with our values, principles, or doctrine. I suppose the church would only be perfect if it were run by perfect beings. God is perfect and His doctrine is pure. But he works through us, his imperfect children, and imperfect people make mistakes.”

Listen people, this was a HUGE admission, big enough to make it into a NYTimes article.  The simple admission and acknowledgement that church leaders are fallible (which the church has always taught but that so many of us refuse to believe) has made national news, because it is such a rarity.  In that article, Scott Gordon of FAIR was quoted, “I believe this is the clearest statement made in recent times that church leaders have made mistakes in the past. Coming from a member of the first presidency, the highest level of leadership in the church, makes it especially powerful.”

Behold, it is glorious!  It is as though we’ve officially been given permission to look back at church history without the rose colored glasses, without linking it to our testimonies and faith when we find something troubling, and without the burden of making our testimonies work for us anyway when we find something that doesn’t sit well with our souls.  Because, you see, some things don’t have to sit well with our souls.  And that is because they were mistakes.

Uchtdorf quotes the title page of the Book of Mormon, “And now, if there are faults they are the mistakes of men; wherefore, condemn not the things of God, that ye may be found spotless at the judgment-seat of Christ.”  Funny story: When I was little I assumed this meant that maybe there were some misspellings or grammar mistakes or something.  It never occurred to me that perhaps the reference was to a faulty context within the scriptures.  That, maybe, a prophet or person of God somewhere along the way might have said something that was not in harmony with our values, principles, or doctrine, but that it made it into scripture print anyway.  But not only is that what this quote from the title page of the Book of Mormon really means, Uchtdorf says it applies to Church history and it applies now, “This is the way it has always been and will be until the perfect day when Christ himself reigns personally upon the earth.”

He goes on to say, “It is unfortunate that some have stumbled because of the mistakes made by men.  But in spite of this, the eternal truth of the restored gospel found in The Church of Jesus Christ of Latter-day Saints is not tarnished, diminished, or destroyed.”  I’ve often said how much I love the gospel, but that I’m frustrated with how often we confuse culture with gospel and doctrine.  But the message that the eternal truth of the gospel is not affected by our imperfectness resonates with me.

Uchtdorf also testifies of the long arch of the Church’s mission, “As an apostle of the Lord Jesus Christ and as one who has seen firsthand the counsels and workings of the church, I bear solemn witness that no decision of significance affecting this church or its members is ever made without earnestly seeking the inspiration, guidance and approbation of our Eternal Father. This is the Church of Jesus Christ.  God will not allow His Church to drift from its appointed course nor fail to fulfill its divine destiny.”

Uchtdorf seems to be saying that although there are hiccups along the way, we will still make it to the end of all things intake, and where the Lord wants us to be.  I suppose the implication is that if we stick with the church, all of these hiccups will be sorted out.  I admit that the long game talk is frustrating to me.  I think he is understating the problem when he says “no decision of significance affecting this church or its members,”  because, sometimes the mistakes of the past have had a very big and often onerous effect of some members of the church.  And saying that these mistakes aren’t a part of the bigger picture serves to diminish the pain these mistakes have caused.  And it follows that many will say that we just need to have faith and wait it out.  To the contrary, I firmly believe that we need to fix the mistakes that we’ve made as a church in the past to progress as a church in the future, and to gain the further light and knowledge that we are promised as God’s children. And so we need to be actively engaged in seeking the truth.  Remember that, as I said above, Uchtdorf did also admonish us to investigate.  Let’s keep investigating the mistakes we’ve made (and continue to make) as a church.  Let’s keep sorting it all out until we have the truth, can separate the mistakes from God’s intent, and can become more perfected as a people.

Also, to all those who keep telling me to stop questioning things and have faith because God leads our church through his prophets and apostles: Stop it.

*You’ll have to look past any discrepancies between what I’ve quoted here and what you may read for this talk in the future.  The print version isn’t available yet, so I’ve transcribed this myself.