The End of Apologetics: Christian Witness in a Postmodern Context 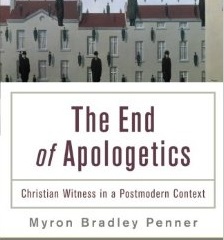 In The End of Apologetics: Christian Witness in a Postmodern Context, author Myron Bradley Penner presents a vivid anecdote pertaining to the kind of Christian witness he would like to see ended. He recounts the story of John, a “self-described atheist-Roman Catholic” and philosophy professor who regarded his loss of faith as a sorrowful occurrence and “desperately wished he could believe in God again.” (77) John makes the acquaintance of two seminarians fresh out of a course taught by a well-known apologist, a man who “described himself as ‘the hired gun’ who rode into town to shoot down the bad guys (atheists) and their arguments and make the streets safe again for Christians.” The seminarians proceed to try and show John the error of his ways with their “shiny new apologetic six-guns,” treating John’s beliefs as “abstract entities” that could be refuted “instead of reflections of spiritual realities with which he personally struggled.” (78) The result was a negative one. A poor impression was made, and John was not shown the truthfulness of Christianity.

As the title implies, Penner’s work is a critique of the Christian apologetics industry, and in that regard, Penner pulls no punches on his dislike for apologetics. In disagreement with an earlier author who cautions that “apologetics can be both blessing and curse” (8), Penner insists, “not only can apologetics curse; it actually is a curse.” (9) Penner cites Søren Kierkegaard, comparing Christian apologists to “a second Judas who betrays the Christ under the guise of a friendly kiss; only . . . the apologist’s treachery (unlike Judas’s) is ‘the treason of stupidity.’” (9) He (Penner) holds that “apologetics itself might be the single biggest threat to genuine Christian faith that we face today” and “tries to make sense of the idea that the modern apologetic enterprise so many Christians engage in is a bankrupt venture, a kind of false messiah . . .” (12). The book, then, is both Penner’s critique of modern-day apologetics and his attempt to present a postmodern alternative, and although the book has no doubt been regarded with glee by some atheists and critics of Christianity for its critique of folks like William Lane Craig and J. P. Moreland, Penner is a believing Christian seeking to persuade other believing Christians. Penner writes, “The deepest reason I have for engaging in this project is in the service of the truth and for the sake of the gospel of Jesus Christ.” (15)

What is it, exactly, that Penner finds so problematic about the modern-day apologetics industry? To summarize: that it is irreversibly welded to modernity, i.e. Enlightenment thinking, and thus embraces and defends the attendant flaws of modernity, even to the extent of supplanting the Gospel with it (42). Penner concurs with Alastair MacIntyre in viewing the Enlightenment as a “great disaster” which “erased our knowledge of past moral discourse” and severed our ties to “tradition or any source outside the self,” instead elevating a quest for “universal, neutral (impersonal, ahistorical), and autonomous reason.” This placed “an immense burden on modern thinkers to vindicate the old rules and practices of morality according to the rationality of free, autonomous, and sovereign moral agents—or else chalk them up to mere individual preference.” The Enlightenment effort to justify the old morality “was always doomed to fail because people no longer share a common understanding of the world or the self” (3).

In embracing and defending modernism while shunning and attacking postmodernism, apologists have subsequently engaged in a number of errors, Penner contends. Penner faults apologists for relying on the genius half of Kierkegaard’s genius/apostle distinction: that is, a competent apologist debater “functions something like an expert witness who is uniquely gifted and highly trained—and therefore especially qualified—to articulate and defend Christian truth in a way the rest of us cannot” (48) and is therefore comparable to Kierkegaard’s “genius,” a person who is “more brilliant, intelligent, and rational than we are, and this puts them in a better position to ascertain the truth.” (50) A genius is born and exists only in relation to those around him/her. In contrast, an apostle is called and “dependent on God’s action alone,” and the “apostolic message does not have authority because it is demonstrably rational or exceptionally brilliant but because it is a word from God” (51). In a sense, Penner is arguing that apologists fail because they seek to utilize the tools of humankind (rationality and brilliance) rather than the tools of God (Word, power, and inspiration). It is no wonder, then, that apologists possess so much in common with the “New Atheists” they so often engage (59-60).

Penner’s book demonstrates numerous strengths. His writing is clear and articulate, his research and grasp of sources is admirable, and he possesses an ability to simplify complex philosophical concepts for a popular audience. (Or, at least, I think he does. I always feel in over my head in conversations about philosophy, but I believe I was able to follow his arguments well enough.) His thesis is timely, provocative, and bold, launching a conversation about apologetics and Christian witness that needs to be had. Many of his critiques of the apologetics industry, and especially the limits and problems with its dependency on modernity, are unnervingly accurate.

That said, the book also suffers from its share of flaws, some minor, some nearly fatal. The most serious to me was that, for all the time spent scolding apologists for their dependence on Kierkegaardian “genius,” Penner seldom cites Scripture himself and instead builds his case on the work of his own “geniuses,” the first and foremost being Kierkegaard. Say what you want about apologists (I could say plenty), but they almost always claim to derive their mission from biblical mandates such as Jude 1:3 or 1 Peter 3:15. Jesus engaged in public debates with the Pharisees; Paul debated in the synagogues. Even the most obviously ill-behaved Christian apologists usually justify their behavior with passages such as 1 Kings 16:18-40 (Elijah taunting the prophets of Baal) or Matthew 21:12-13.

If Penner is serious about turning Christians to his postmodern style of witness, it is imperative that he build up a serious biblical framework to support his arguments, in addition to addressing the framework on which apologetics is built. 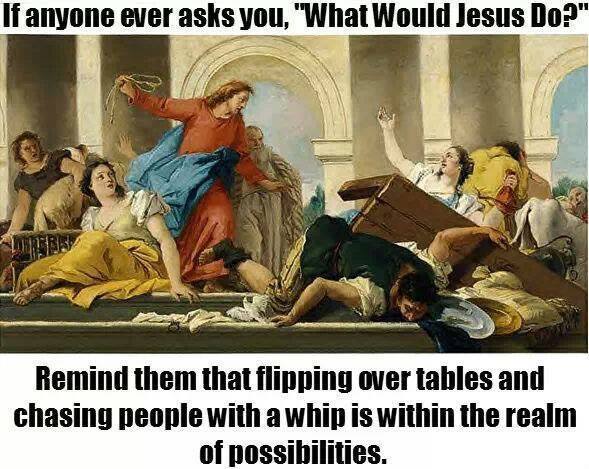 But that brings me to the next most serious flaw in the book. As I mentioned earlier, Penner does an admirable job of drawing attention to the philosophical problems that underpin the modern apologetics industry. He is apt at tearing down. Where I fear he has not gone far enough is in giving readers a pragmatic description of what a postmodern Christian witness would look like and how it would address differently the issues that apologetics has attempted to address. When apologetics is described and critiqued, concrete, real-world examples are provided: the story of John the atheist-Catholic, public debates between “New Atheists” and apologists, etc. But when Penner describes the postmodern Christian witness, it is almost always spoken of in abstraction, i. e. “Actual Christianity means being Christian in specific ways: trusting, praying, believing, loving, witnessing” (90); “I want to pattern our apologetic efforts after apostles who do not ground their message in their own genius but inn a transcendent word from God” (82). The most concrete real-world example given is of Martin Luther’s “Here I stand; I can do no other” confession at the Diet of Worms (124). I am on-board with a lot of what Penner has to say in principle. I just have little idea what he means in practice.

For these reasons, I view The End of Apologetics as more of a beginning than an end. It is the beginning of a conversation about apologetics and witness that needs to happen, and Penner has made a worthwhile contribution to that conversation. I will be interested in the dialogues that I hope this book inspires.

All posts by Bridget Jeffries