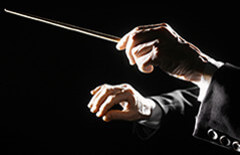 An audience waits in anticipation. A low murmur of chatter accompanies the sound of warming instruments, which accentuates the anticipation. The oboe plays an “A” from the stage. The crowd quiets as the woodwinds and strings tune to the note. A tuba plays a “B flat” for the brass to tune to. The process continues with swelling sound. Each musician is familiar with the process, they have done it many times. They have spent a career of passion, practice and preparation for this moment. Each has developed an interest in music into a talent and then to virtuosity. They have likely read about musicians gone before. They have listened to live performances and recordings and they have examined the lives and art of favorite composers.
They are intimately familiar with their instruments, they have removed and replaced strings, corks, keys, valves, reeds and bridges. They have personally invested hundreds and thousands of dollars to obtain and maintain them. They have suffered and sacrificed through trauma, frustration and discouragement in order to express the passion they have found for the beauty of this art. Some in the audience will follow/ are following their path.
Sound subsides as the house lights dim.

The crowd erupts with applause and the musicians rise as the conductor enters the stage. He bows to the audience and motions to the orchestra to sit. Sound subsides and every eye is fixed on him as he steps up onto the podium. The instruments are raised to the ready as he raises his baton and then…

Like the musicians, the conductor has spent years preparing for this performance. He knows something about each instrument on the stage. He has likely played each one and he may have specialized in a particular one but his expertise is the music itself. He knows the composer’s history as well as the cultural and political environment at the time the music was created. He’s probably familiar with other music written by the composer and he knows each theme phrase and measure of the piece they are about to perform. He has listened to it multiple times and studied the score. He knows how he wants to hear it played and how to coax the music from the members of the orchestra.
The musicians know each other, they’ve worked and played together. They each know their part well but they also know what the other musicians will play. They know how their part sounds in relation to the rest of the orchestra and they know how to respond to the conductor.
The baton comes down. The theater erupts with sound. The musicians have responded to the gestures of the conductor and the audience thrills at the result.

What is your instrument?
Who is in your orchestra?
Which conductors are you responding to?