The Challenge of Honesty: Essays for Latter-Day Saints – A Book Review 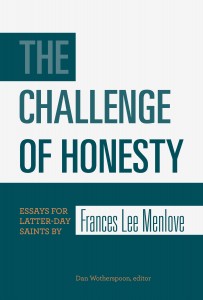 The Challenge of Honesty: Essays for Latter-day Saints by Frances Lee Menlove

Frances Lee Menlove was a founding member of Dialogue: A Journal of Mormon Thought, holds a PhD in psychology, and also has a MDiv degree from the Pacific School of Religion. The Challenge of Honesty contains her influential essay of the same name, followed by more recent essays, sermons and devotionals on various topics.  The collection is simultaneously conversational and scholarly. In a world where journalism is often characterized by explosions of emotion and unchecked rhetoric, Menlove presents the reader with cool, collected and well-thought out essays. Because she is a regular contributor to Sunstone and Dialogue, Menlove may be viewed by some in the Mormon community as a more provocative LDS member, but this collection offers insights for the full spectrum of Mormons–and indeed all religious people seeking to better understand their belief and faith.

The book begins with Menlove’s foundational essay “The Challenge of Honesty.” This essay was written in 1966 and published in the first edition of the Dialogue magazine. Over 45 years later, the essay remains poignant and highly relevant to our time. She begins with the concern that “psychologists and psychiatrists have become increasingly concerned with the lack of authenticity and the sham that seems at times to permeate to the very core of westerners.” (pg 2) Menlove asks readers, “How free are Mormons to confront themselves? How free are they to question and analyze, to admit their strengths and weaknesses, their beliefs and doubts and problems with the Church?” (pg 3) She raises the concern that the “unruffled Mormon” view means that when a person runs into doubts, temptations, sin, or anguish they believe they must have a personal defect rather than seeing this experience as a challenge to work through. “When doubts and problems are seen as evidence of sin, of defects of character, then it becomes dangerous for individuals to confront themselves honestly.” (pg16) Menlove explores the different pitfalls that both religious liberals and religious conservatives are prone to as they face the dilemma of inner honesty. Liberals hide their true non-belief behind criticism and calling for change in the Church. Conservatives, in their desire to defend, refuse to question or consider issues that may interfere with their way of life, thus hiding a lack of faith that the gospel is true enough to withstand challenges. She explores the pitfalls she believes the LDS Church is prone to when facing honesty, the belief that the simple believer cannot handle the “naked” truth and the idea that if the Church has mistakes in the past then they must be failing today also. Menlove believes that honesty needs to be viewed in context and as a whole. “Let me dispel a common misconception about honesty…the notion seems to be that the one who can say the most unpleasant things is the most honest. Honesty can become a billy club, an instrument of aggression capable of destruction. It is just as dishonest to suppress or play down the positive, the hopeful, the real achievements of the self and of the Church as it is to speak only of these.” (pg 15)  Menlove  addresses the need to deal with both positive and negative “honesty” as Church and world paradigms change.

The second essay encapsulates Menlove’s belief in the important role that Dialogue and organizations of similar purpose play in encouraging open discourse, discourse which serves to keep the LDS Church resistant to the “problem of certitude”. Menlove describes what she calls the pre-correlation era of the church, which is a time  of “open, optimistic world view…that the gospel was not fragile, that it didn’t need protections from outside ideas, from science, or from its own history.” (pg 25)  Menlove further explains, “Times change. understandings change. A little historical empathy is in order. Cultural blindness becomes obvious with hindsight, but it is more difficult to recognize in the present.” (pg 30)  Her arguments lead the reader easily into the third essay which is about the difference between faith and belief and the evolution of both over time. Menlove discusses changes to conceptions of faith and belief that have occurred throughout history and evokingly asks, “is it really necessary to include a list on non-negotiable beliefs to which everyone must assent…” (pg 54)  She continues with the idea that absolute truth is not really known in this earth life and therefore “our goal must be faithfulness to the closest approximation of truth for which our minds are capable. But it is essential to realize always that these conceptualizations are nevertheless still approximations to the truth, not the truth itself…” (pg 57)

In the fourth essay, Dr. Menlove takes on the controversial issue of the ordination of women to the priesthood in the LDS Church. In a non-contentious way, Menlove approaches the subject with evidence from the Bible and the Church around the time of Christ showing that women participated in administering ordinances. She also references the fact that even LDS women administered healing ordinances until 1946 when apostle Joseph Fielding Smith asked the Relief Society to stop the practice and call upon the Elders in the Church.  Menlove discusses changes in attitude towards slavery and African Americans and shows how a parallel shift in attitudes has been occurring towards women.  She shows that the Bible has passages that can be manipulated to support slavery just as there are passages that can be manipulated to support extreme patriarchy.  However, both extreme positions are best understood when viewed through the cultural lens of their time. “It’s…a bit too easy to look back with disdain at those who used religious or biblical arguments against the abolition of slavery or against women’s suffrage. Religion is deeply embedded and shaped by its cultural context, and as times and cultures change it is sometimes difficult to discern what is at the core of Jesus’s message and what is an overlay of past cultures.”(pg 81)  She reasons that the past ability of the LDS Church to overcome cultural-biases found in the likes of slavery and women’s suffrage points towards the possible future ordination of women to the priesthood, especially given the prominent role it played in both early Christianity and early Mormonism.

In her fifth essay, Menlove argues for a cautious approach to morally complex issues, highlighting the subject of homosexuality.  “All communities of faith struggle with the challenge of being sensitive to their social and historical context while remaining true to their core beliefs. Each generation must interpret the meaning of Christ’s gospel to meet current challenges and morally complex issues.” (pg 94)  She rightly points out that our understanding of this complex issue changes as science better understands human sexuality and asks that the Church resist the temptation “to cherish certainty over truth. Certainty alleviates the anxiety and the fear that frequently accompany ambiguity…but is difficult to maintain when reason and experience don’t support it.” (pg 94)

The second half of the book is comprised of devotionals given by Menlove yearly for the last decade. As expected, they are in a more narrative form and include many meaningful experiences from her own life. In these devotionals, Menlove again addresses the subjects of her previous essays along with other general religious themes like self-righteousness, charity, and hope. She delivers these topics in a delightful and intellectual way, relating them back to issues in the LDS Church. These sermons inspire introspection on topics that are valuable to all people, even if you disagree with the conclusions she eventually reaches.

A common quote/experience that Menlove uses over and over in her essays and devotionals is from her grandfather. After he had a long term disagreement with his bishop on the sanitary nature of sharing a sacrament cup, Menlove’s grandfather concludes–in what may be viewed as the major theme of the book–“See, even though Church authorities sometimes act like jackasses, the Church has a way of righting itself.” (pg 24).