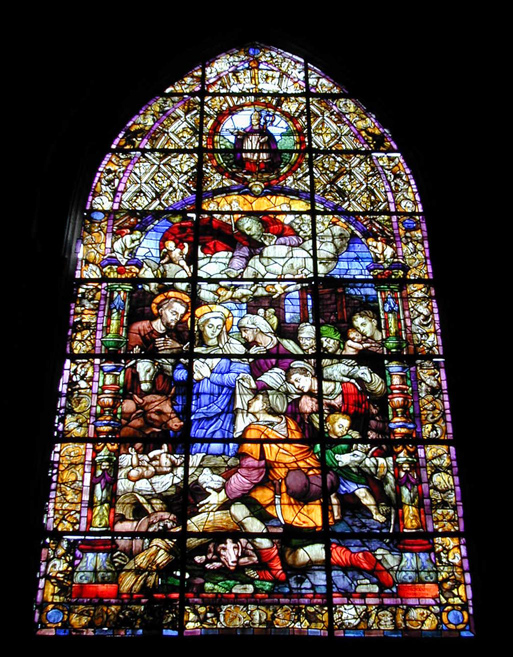 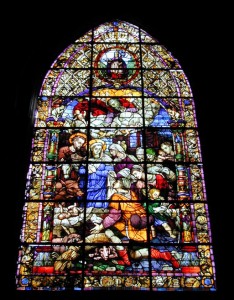 hen I was younger my family attended a protestant Church that had lots of stained glass windows. In fact, I don’t think there was a clear window-pane in the whole place. And it was marvelous! There were biblical scenes and symbols everywhere – executed in astonishing, glowing color. The presence of those windows transformed the building, in its very essence, into a sermon of light; a visual hymn of praise and rejoicing.

But when we joined the Mormon Church I was confronted with an entirely different visual experience; indeed, a complete reversal from my former Church. I found myself immersed in a visual desert of sorts, for Mormon chapels have nothing of adornment. Bland vanilla walls. Muted blue carpet. The plainest of wood trim and pews. The only term I can conjure up to describe it is ‘boring’.  The sermon of that chapel was a sermon of silence.

So the only color to be found in our Mormon chapel was the color we brought with us in the clothes we wore. And in the ’70’s, that meant we wore some pretty outrageous colors! Plum-red was a popular color back then, as was burnt orange. And black was popular too. I can remember passing the sacrament in a black shirt with a snazzy metallic-silver bowtie. And no one batted an eye. It was normal.

But something changed between then and now. A Prophet stood up one day and said, “Every young man is to serve a mission!” And suddenly, missionary couture became all the rage. We wanted to look like missionaries, since that’s what we were planning on becoming. The colored shirts were scrapped, and white shirts became the norm. And shorter hair.

That was many, many years ago, but the tradition of wearing white shirts has become completely entrenched in our culture. In fact, it has become such a uniform that I am now alarmed by its continued over-use. There is absolutely no doctrine that says a Priesthood holder has to wear a white shirt, and yet we hear of instances quite frequently of men and boys being forbidden to exercise their Priesthood because they did not wear one. The General Handbook of Instructions states the policy very clearly:

“Those who bless and pass the sacrament should dress modestly and be well groomed and clean. Clothing or jewelry should not call attention to itself or distract members during the sacrament. Ties and white shirts are RECOMMENDED because they add to the dignity of the ordinance. However, THEY SHOULD NOT BE REQUIRED as a mandatory prerequisite for a priesthood holder to participate. Nor should it be required that all be alike in dress and appearance. Bishops should use discretion when giving such guidance to young men, taking into account their financial circumstances and maturity in the Church.”

I’ve had friends and acquaintances relate horror stories about self-righteous Bishops publicly taking Deacons to task over the ‘White Shirt Rule’ – a rule that simply does not exist. In fact, my current Bishop will not allow someone to participate in the Sacrament if they are not wearing a white shirt. This phenomenon is evidence of a wider (and disturbing) cultural trend in the Church towards pharisaical thinking and the adoption of external symbols as evidence of piety.  This is clearly something Christ warned his disciples about – judging by external appearances. Hugh Nibley has one of my favorite summations on the matter:

“The worst sinners, according to Jesus, are not the harlots and publicans, but the religious leaders with their insistence on proper dress and grooming, their careful observance of all the rules, their precious concern for status symbols, their strict legality, their pious patriotism … the haircut becomes the test of virtue in a world where Satan deceives and rules by appearances.” – Hugh Nibley in his talk ‘What is Zion?’

So a while back, to protest our decided cultural slide towards robotic conformity and pharisaical obsession with clothing, I decided I would stop wearing white shirts altogether. And I’m happy to report that, come September, it will have been exactly two years since I have worn a white shirt to Church! TWO YEARS!

In honor of this milestone, I would like to invite Priesthood holders everywhere to join me in adding a little color to our worship services. On September 22nd, which I am designating Technicolor Sunday, lose the white shirt for once and wear your best and brightest colored shirt/tie combo to Church! C’mon brethren! You don’t want to look like a bunch of Storm Troopers sitting in the pews! Take a stand! Be bold! Be different! Let the full spectrum of the Priesthood be seen in our Wards and Stakes! You with me? I hope so! We also want to see you in all your Technicolor glory, so send us pictures of you (and your friends) in your colorful Sunday Best, and we’ll post them here for all to enjoy.  To share your pictures, email them to: michael@rationalfaiths.com

And be sure to check out the Technicolor Sunday Facebook Group HERE. 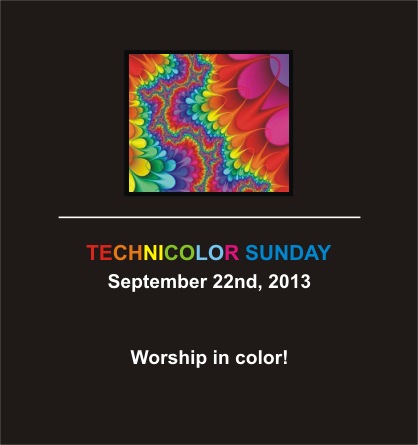 Neal is an active, single, gay Mormon from the South. He is a computer nerd and works for a computer programming company, but he loves wildlife, travel, and the outdoors. And chocolate. Dark chocolate! He served a mission to Idaho sometime before the last ice-age. He believes in Unicorns.

All posts by Neal Douglas