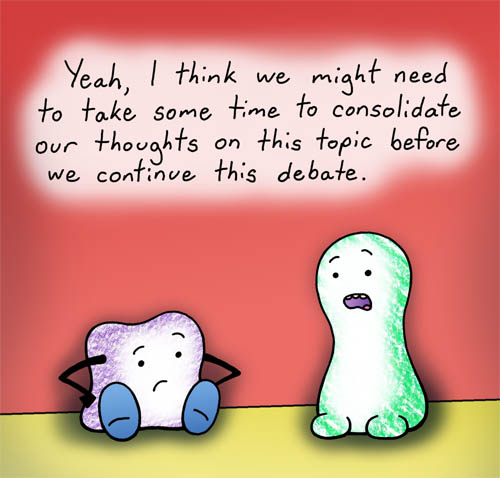 I’ve had many interactions the past few months with people who are concerned about me and what they consider to be controversial views within the LDS church.
IF they decide to actually talk to me about it, it seems they often come at me with an intent to get me back in the line that they have defined instead of listening with an open heart.
Most of the time appeals to authority are used as the “so there” punch that can not be argued with.

For many it is unfathomable that someone can still be a Mormon, even want to be a Mormon, when they don’t fully subscribe to the content.
And it goes the other way as well with people who are not LDS/inactive/formerly LDS wondering the same thing.

Below is a laundry list of issues (some of which are seen here as reasons given for leaving the church) that many have with the church. For many faithful members, there is no question. That’s fine. What isn’t fine is when some members can’t see that these are real issues for many members of the church that can’t just be fixed with the standard answers (ie; have more faith, doubt your doubts, follow the prophet, read the scriptures, pray, go to the temple). These answers often set a circle in motion when difficult topics are discussed between people.

Joesph Smith
Church History
Book of Mormon
Race
Polygamy
Patriarchy
Lack of a spiritual witness
Temple ceremonies
Homosexuality
Gay marriage
Abuse
What is/is not doctrine
Follow the prophet. Period.
Church culture
Science vs. church teachings
And so many others personal and on different levels of importance to each person.

Back to the circle in motion.
Take this scenario. A friend expresses that they don’t agree with the church’s stance on gay marriage. You reply with, well, have you prayed about it? The friend answers yes and that they didn’t receive the answer that the church seems to give (though there are some conflicting statements). So you respond by saying that you struggled with the same thing, but choose to follow the prophet’s statements. Your friend says they don’t think that everything a prophet says is necessarily correct as they are also men and we have always been taught that. You say, well, you can’t go wrong when you do what the prophet says. Friend says well maybe what he is saying is wrong. You say that the prophets are a direct line to God so they always have the spirit and speak with such. Friend illustrates a couple of things where they have been wrong. You dismiss and say that you choose to follow the prophet.

I choose this scenario because it is so common. And it’s not helpful. It’s a big old circle that doesn’t accomplish anything.

In these instances and other similar situations, I find myself wondering why everyone seems to care so much about what others do or do not believe. Most people who do have issues with the church in varying degrees and all over the spectrum do not go out of their way to express their thoughts publicly, nor are they trying to tear others away from their faith. Many fully understand and support people who do Mormonism in a more traditional manner.

Our Heavenly Parents and Jesus Christ will be the judge. They know their hearts and souls, where we do not.

Instead of talking in circles, be a little more understanding and open minded.  We are not all the same people and different things speak differently to each individual.
People can believe differently than you, even on things you feel are very fundamental and doctrinal,  and still be a Mormon. We’d probably all be better off accepting that and just worry about ourselves instead of what everyone else does or does not believe.